LED-based lighting has many advantages including a small footprint, exceptionally long lifetimes and excellent lighting efficacy in lumens per watt.


LED-based lighting has many advantages including a small footprint, exceptionally long lifetimes and excellent lighting efficacy in lumens per watt. As LEDs have become popular, the challenges of designing with them have become more evident – with thermal management topping the list.

The challenge begins with the source itself. High-powered LEDs do not generate infrared radiation, which is the primary way competing light sources dissipate energy that is not visible light. Instead, 75 to 85 percent of energy used to drive an LED is converted to heat, compared to 42 percent for a typical linear fluorescent, 37 percent for a metal halide bulb, and only 19 percent for an incandescent light source. In LED-based system designs, this heat must be conducted from the LED die to heat sinks, the circuit board, housings or luminaires. In addition, power dissipation in other parts of the system, such as the power supply, must be minimized.

Although the small footprint that LEDs offer designers is generally seen as an advantage, it also has the negative effect of increasing power density. LED manufacturers are constantly increasing extraction efficiency and have an achievable goal of reducing heat to 50 percent of the energy used to drive an LED. Even this figure will require careful thermal management.

Depending on color, manufacturer and process technology, many LEDs are still rated for operation at 25°C. Temperatures well beyond 25°C begin to strip LEDs of their primary advantages. Shorter lifetime; reduced light output; and color shift are common. Heat has the following physical effects that result in the problems just mentioned: Many LEDs are still tested and binned at a junction temperature (Tj) of 25°C, but it is not abnormal for them to operate at sustained operation junction temperatures of 60°C or higher. Without adequate thermal design, Tj can be significantly higher.

After an LED is integrated into a system, Tj depends on three factors: drive current, thermal path, and ambient temperature. The higher the drive current, the more heat is generated at the die. The amount of heat that can be removed depends upon the ambient temperature and the design of the thermal path, which can consist of chip packaging, heat sinks, and circuit boards. In each case, products for LED thermal management are available. In some specialized cases, fans and thermoelectric coolers can be added.

Figure 1 illustrates how even a modest increase in junction temperature can negatively affect light output and lifetime for LEDs rated at 25°C.

The Lighting Research Center derived Figure 1 from experimental data collected for 10,000 hours and extrapolated the data out to 70,000 hours. Two identical LEDs were driven at the same current but with an 11°C difference in Tj. Estimated useful life – which is defined as 70 percent lumen maintenance – decreased from about 37,000 hours to about 16,000 hours. The industry is aggressively improving the durability of LEDs at higher operating temperatures with many devices claiming 70 percent lumen maintenance for 50,000 hours at drive currents up to 1000 mA and Tj at or below 120°C. At the leading edge, Cree Inc.’s XLamp® XT-E family of white-light LEDS is typically binned at 85°C and can handle a drive current of 1500 mA.

From a system design perspective, the best starting place for thermal management is the printed circuit board itself. A good rule of thumb is that problems will be encountered at 80 watts of LED power and above. A typical application is street lighting, which requires between 80 watts and 150 watts per lamp. Thermal connection between the LED’s slug and the MCPCB typically runs through a thermal via. Designing thermal vias to different planes in the MCPCB can reduce the system temperature by 10°C.

MCPCBs can be constructed from a variety of heat-dissipating materials. Copper offers superior thermal conductivity, but aluminum is chosen more often because it is lighter and less expensive. Specialized MCPCBs use materials such as ceramics, coated steel, or other materials that improve heat transfer through the board.

External heat sinks should be used when exceptionally large amounts of heat must be dissipated within the lighting enclosure. Copper and aluminum are common heat sink materials and the heat sink’s geometry is a critical concern in many applications. Heat sink performance varies depending upon factors such as the material, number of fins, fin thickness, and base thickness. The optimum design depends on the local air flow conditions and these are perturbed by the heat sink itself. Heat sink manufacturers are well versed in these technologies and their advice can be valuable to electronic design engineers.

The most difficult LED applications are those that require an airtight enclosure to protect the LED from its environment. A straightforward way to address this challenge is to use an enclosure material having a high thermal conductivity. In other cases, more elaborate measures may be required.

A technique generally reserved for special cases is an air-to-air heat exchanger design that uses internal fans to circulate hot air over internal fins that conduct heat into the walls of the enclosure. External fans are then used to move cool ambient air over fins fitted to the outside of the enclosure to remove the heat. Heat transfer is then carried out by a series of convection and conduction steps.

Once an LED, or LED array, is integrated into a system, thermal management is still essential because other components – notably the power supply – generate significant heat as well. Numerous thermal management technologies, design techniques, and analysis tools are available to help system designers. Choosing the right technology and applying it intelligently is not always easy, however, because it depends on the application, the project budget and the time allotted for the design cycle.

The most likely culprits in the power supply are the MOSFETs that drive the LED and the output diodes. There are three basic design approaches: placing the power supply where it can best dissipate the heat it generates; choosing a more efficient MOSFET; and considering multiple types of packages.

Power supply placement can be considerably improved with analysis tools. Practically any design team could use thermal imaging cameras that measure temperatures directly and other features that pin point hot spots. Test and measurement companies, such as Fluke Electronics, offer inexpensive IR cameras. For systems that include some sort of housing and, therefore, require 3D analysis, computational fluid dynamics (CFD) software, from companies such as Mentor Graphics, allows not just a thermal view of the physical design but also the ability to model and visualize the effects of changes in environmental factors such as airflow.

Selecting the best device is equally important and MOSFET selection has three main governing factors: the device’s breakdown voltage, which must be at least twice the input voltage; its maximum RDS(on) resistance; and its packaging – all of which are offered in many combinations of semiconductor companies.

While a low RDS(on) specification is desirable for lower power consumption, these devices are also more expensive. The less expensive device will be fine with a cool-running board or a design in which the MCPCB is sufficient. However, when thermal management is still an issue, the trade-off between a more expensive MOSFET as opposed to using a heat sink should be considered. The more expensive MOSFET is often the right choice.

Cree and other LED manufacturers have a lot invested in having the total system functioning properly. Cree has designed a MOSFET specifically of lighting systems as well as a product training module for its 1200V Z-FET™ silicon carbide MOSFET. Not surprisingly, semiconductor companies that have impressive power product portfolios have designed MOSFETs that are good fits for lighting applications.

LED manufacturers have also been improving their core products by introducing high-voltage/low-current devices that add another dimension to MOSFET selection. From a system perspective, a MOSFET that achieves its power requirements with a higher output voltage and lower current operates more efficiently. STMicroelectronics, for example, offers a line of MOSFETs with RDS(on) values as low as 6.5 m?. One example, which comes in its PowerFlat™ packaging, is the STL70N4LLF5.

Packaging can make a big difference. Chip manufacturers make some package types available with thermo pads affixed to the bottom, but there is still a trade-off between thermal efficiency and footprint. As an example, Table 1 illustrates just how efficient these measures can be by comparing an SMD version of the standard TO-220 with the PowerSO-10 package from STMicroelectronics.


Table 1: Comparison of PowerSO-10 and TO-220 SMD-version (Courtesy of STMicroelectronics).

While the thermal resistance in degrees Celsius per watt of both is the same, the newer package offers several advantages including volume, height, and footprint. The test vehicle used to generate data for the table was a MOSFET with a die-size of about 32,000 mils² (about 20.6 mm²).

STMicroelectronics’ PowerFlat package mentioned above improves on the company’s PowerSO-10 package in the table above because it is thinner, which allows MOSFET operation at higher frequencies. This is significant from a thermal management perspective because EMI and inductance loss are significantly reduced. The PowerFlat 5 mm x 6 mm package is just 1 mm high compared to 3.5 mm for the PowerSO-10.

Thermal management can also be accomplished through digital control. By introducing a low-cost MCU into the design, many aspects of the lighting system’s performance can be controlled more precisely. A very straightforward example of thermal management is to place a thermistor near the LED to track the temperature in that part of the printed circuit board. In a digitally controlled system, the MCU monitors the temperature and reduces supply voltage incrementally if the temperature rises beyond its limit point.

Digital control delivers much more functionality, and can be used to compensate for LED aging by increasing current to maintain the rated light levels. It can also dim the LED to compensate for strong ambient light. It can provide different voltages to LED strings of different colors because threshold voltage varies according to color. Since these functions tend to optimize energy consumption, they have a positive effect on thermal management.

Not surprisingly, introducing the MCU also requires changes in the system topology. Figure 2 shows a pulse current topology, a single power stage outputs the voltage for all LED strings. The control signals can be different for each string because the MOSFET effectively chops the output from the PWM very quickly. 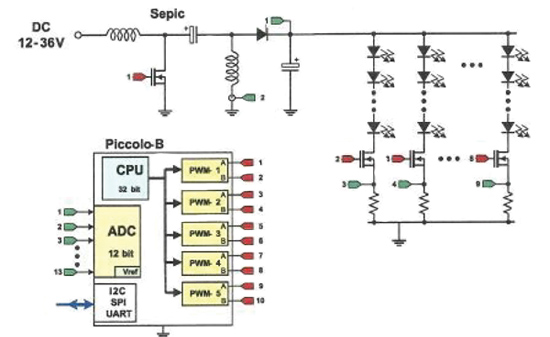 A buck-boost converter (in this case, a SEPIC converter) is connected in series with multiple LED strings. A MOSFET is connected in series with each string. The on-time of each string’s MOSFET controls the average current through any of the LED strings. Since LED brightness is roughly proportional to the LED current, the duty cycle of each string’s MOSFET controls the brightness in the string.

The MCU supplies all the intelligence, receiving feedback signals from, and generating PWM signals for, each LED string. Thermal management can be implemented by feeding back temperature readings to the MCU, which adjust power accordingly. Texas Instruments’ TMDSDCDCLEDKIT developer’s kit offers a good way to get acquainted with digital control of LEDs using the pulse-current topology just discussed.

Thermal management of LED systems is a critical design consideration that should have almost the same priority as the electrical design by the design team because it impacts so many design decisions from the selection and protection of the LED itself, to power supply components, to printed circuit board materials. Suppliers offer a wide range of products that make thermal management easier, however, and they have also provided training and development tools. Analog control presently dominates the market and is cost effective, but for some applications LED system design may move in a new direction with the introduction of digital control.