Intel returns to the back of global semiconductors

As everyone in the semiconductor industry knows, the first company in sales last year (2018) was South Korea's Samsung Electronics, and the second was Intel in the US. There are three companies in the market research company that are responsible for publishing the annual sales rankings of semiconductor manufacturers, namely Gartner, IC Insights and I HS Markit. This spring, the top three companies announced last year were Samsung Electronics (hereinafter referred to as "Samsung"), and the second was Intel.

In the market research company that publishes semiconductor enterprise sales rankings, there is no doubt that Gartner has the highest impact and longest history. Gartner announced its estimated ranking in January and a confirmed ranking in April.

According to the rankings announced by Gartner, Intel maintained its TOP1 status for 25 consecutive years between 1999 and 2016. On the other hand, Samsung continued to maintain TOP2 for the 15 years from 2002 to 2016. In other words, TOP1 is Intel, and TOP2 is Samsung. This state lasted for 15 years.

Gartner announced last year's sales rankings (determined value) on April 11 this year. At this time, there are predictions in the data released that due to the decline in storage semiconductor prices, Samsung is almost sure to take the first place in this year's corporate rankings. Sliding and giving the first place to Intel.

Sales rankings of semiconductor manufacturers from 2002 to 2019. Values ​​as of 2018 are aggregated by the authors based on market research firm Gartner's published values, which are predicted by Gartner on April 11, 2019. (Image by: pc.watch) 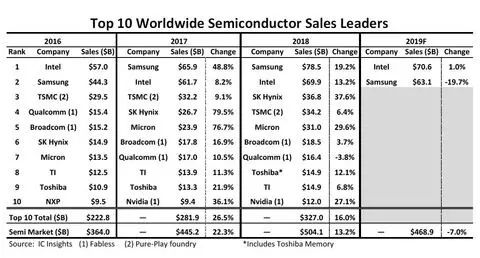 Gartner's last year's (2018) semiconductor sales rankings, the left side is the forecast released on January 7, 2019, and the right side is the confirmed value announced on April 11, 2019. (Image by: pc.watch)

The main reason for promoting the replacement of semiconductor companies is the decline in the price of storage semiconductors. In particular, the price of DRAM has been falling since last fall, which has greatly reduced Samsung's sales.

This effect is evident from the quarterly semiconductor sales rankings published by market research firm IHS Markit. Last year's Q1 (January to March) to Q3 (July to September), Samsung ranked first and TOP2 was Intel. However, in Q4 (October to December), the situation reversed, Intel ranked first, and TOP2 was Samsung.

At this value, it is noted that for Q4 sales, both Intel and Samsung are less than their respective Q3s, as mentioned in the article "Continuously Reversing the Semiconductor Market" in this column in March 2019, Q4 The economic downturn has affected the entire semiconductor market. Although the decline in storage semiconductors is extremely obvious, the market for processors and ASICs is also in a downturn.

According to data released by Samsung, the average selling price of DRAM in Q4 is 7%-8% lower than Q3, and the number of DRAMs converted to storage capacity (Bit number) is reduced by 17%-19%. Simply using multiplication to calculate the sales amount is about 23%-25%. Although Samsung did not disclose the amount of DRAM sales, it is undeniable that the 24% decline has had a huge impact on overall semiconductor sales.

On the other hand, Intel's Q18 performance in 2018 is 2.6% lower than Q3. This reduction includes products other than semiconductors. Although it is not a comparison of semiconductor growth, it is down by 2.3% compared with IHS Markit. There is almost no difference.

IHS Markit's ranking of semiconductor sales for each quarter of 2018. This table is compiled by the author based on data published by IHS Markit. (Image by: pc.watch)

TOP10 in semiconductor sales for each quarter in 2018 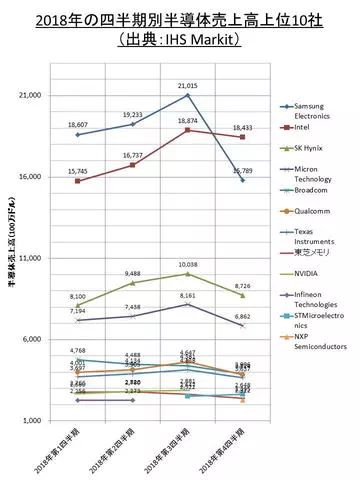 IHS Markit's semiconductor sales for each quarter of 2018 are ranked TOP10. This form is compiled by the author based on the information published by IHS Markit. (Image by: pc.watch)

Next is Samsung. Samsung did not disclose the annual sales forecast for semiconductors. Regarding Samsung's semiconductor sales, from the data released by IC Insights on March 7, 2019, its sales growth ratio is negative 19.7%, which is minus 20%, and this ratio is applied to Gartner's 2018 semiconductor. In sales, Samsung’s sales in 2019 were approximately $59.91 billion (approximately RMB 406.65 billion). 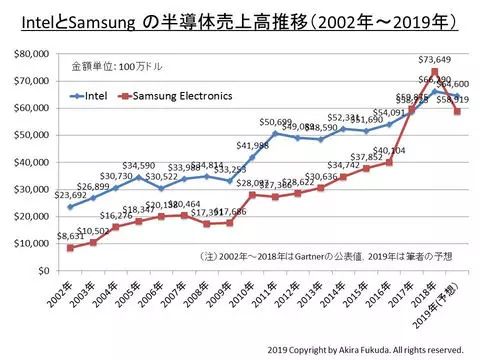 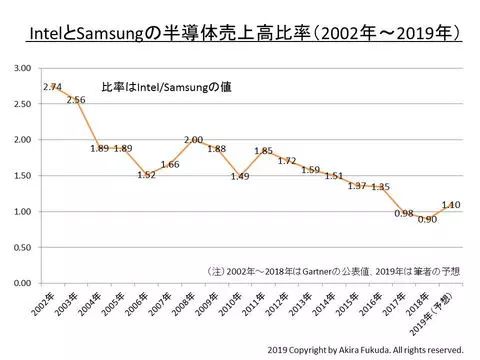 Semiconductor sales ratio of Intel and Samsung (2002-2019). The ratio is the value of Intel/Samsung. The values ​​from 2002 to 2018 are summarized by the author based on data published by Gartner. The value of 2019 is the author's prediction. (Image by: pc.watch)

In this way, TOP3's SK Hynix is ​​hard to threaten TOP1 and TOP2, and TOP5-TOP7's Broadcom, Qualcomm and Texas Instruments are also difficult to pose a threat to TOP4's Micron.

The TOP3 in 2019 will be SK Hynix, or Micron. The TOP5-TOP7 in 2019 should be the ranking of Broadcom, Qualcomm, and Texas Instruments.