This article looks at the Atmel 2.4 GHz REB233SMAD Evaluation Kit.


With machine-to-machine (M2M) applications growing at an exponential rate, the race is on to see which wireless protocols come to dominate this space. As always, the solution depends on the problem. For long-distance, wireless 2G cellular might best fit the bill. For shorter wireless distances Wi-Fi®, Bluetooth®, and a number of 802.15.4-based protocols – ZigBee being chief among them – can all work. However, if your intended application needs to be ultra-low-power but work in an environment where link reliability may be a problem, Atmel’s 2.4 GHz REB233SMAD Evaluation Kit (see Figure 1) deserves a look. 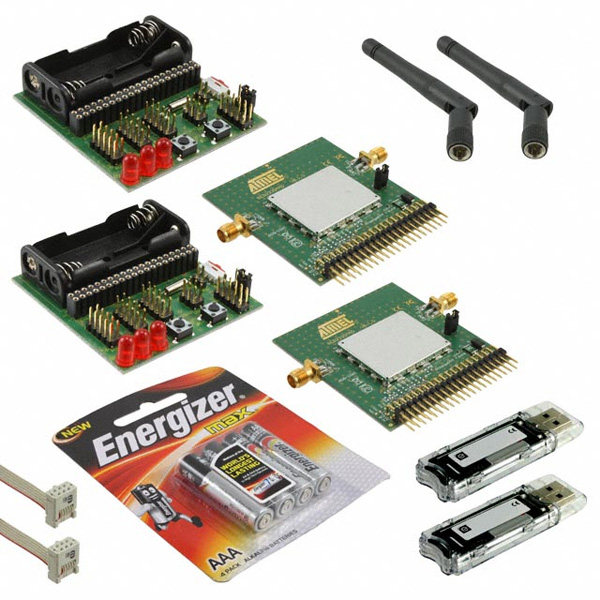 
The REB233SMAD-EK contains two radio extender boards (REB) based on the Atmel AT86RF233 2.4 GHz RF transceiver; two controller base boards (CBB) built around the ATxmega256A3 MCU; two USB adaptors with cables for programming the MCU; four SMA antennas; plus batteries and a Quick Start Guide. The wireless boards plug into the MCU boards, enabling you to do an immediate range test of two complete wireless nodes using a simple ready to run range measurement application.

The kit is designed to be a complete platform for designing and prototyping ZigBee-compliant wireless applications such as ZigBee SmartEnergy and Home Automation systems. To that end, Atmel supplies its BitCloud™ stack – a ZigBee® PRO certified platform – and the BitCloud Profile Suite.

The controller base board (REB-CBB) is built around an 8-bit Atmel AVR ATxmega256A3 MCU. The board has a connector for programming and debugging using an Atmel AVR JTAGICE programmer. 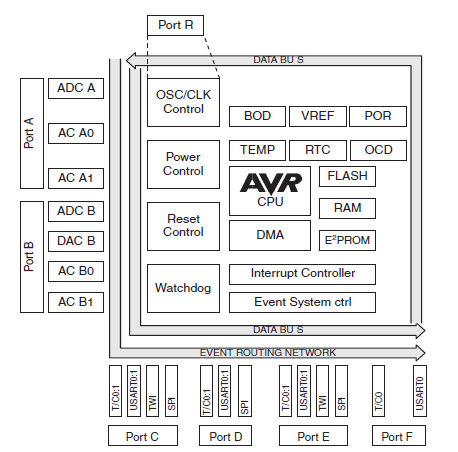 For more information on this and other Atmel MCUs check out their MCU Product Line Introduction training module.

The radio extender board (REB) is built around a 2.4 GHz Atmel AT86RF233 transceiver chip that is targeted for IEEE 802.15.4, ZigBee, RF4CE, 6LoPAN, and ISM applications.

With the addition of just a few external components – all of which are included on the board (see Figure 3) – the AT86RF233 forms a complete FCC Part 15-certified RF front-end module. 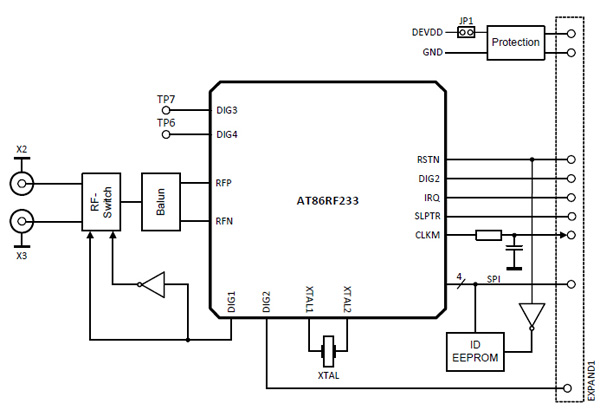 
The board has two SMA connectors to support antenna diversity. While in receive mode, the chip continuously switches between the two antennas to select the one providing the best receiving path. Once an IEEE 802.15.4 synchronization header is detected, the antenna providing the better signal quality receives the rest of the frame. This can greatly increase reliability when the signal link suffers from noise or multipath fading.

In transmit mode, the AT86RF233’s current consumption varies with the output power, which is programmable from -17 dBm (7.2 mA) up to +4 dBm (13.8 mA). With the transmitter turned off (IGTRX_OFF), current consumption drops to 300 μA. In sleep mode, the chip draws only 0.2 μA; and in deep sleep mode, this drops further to 0.02 μA. The chip lives up to Atmel’s claim for being ultra-low-power.


I turned on both boards and put one into transmit mode and let the other act just as a receiver. For the range test, I started the program on both boards for full duplex operation. The 2.4 GHz kits I have tested before were usually lucky to transmit across our (not very large) house. This kit showed no signs of dropping packets, so I took it outdoors and resorted to my traditional range test platform (see Figure 5). 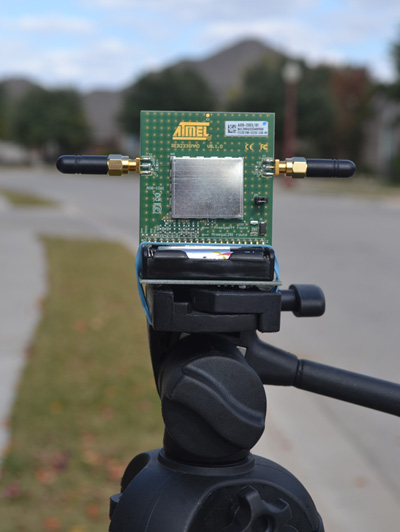 
Having received only two of the larger, hinged antennas that come with the kit, I instead used four matching ¼-wave stub antennas. Repeated tests showed the effective range to be about 350 feet. Substituting the larger antennas at one end increased the range to about 500 feet. That is about ten times farther than I have been able to get even with a range extender at home at the same frequency using Wi-Fi. The combination of high receiver sensitivity and antenna diversity – not to mention a low-data rate protocol – definitely gets the job done.

The same program that enables quick range check also allows for packet error rate (PER) measurement, as well as adjusting different transceiver features. To do this, connect one of the USB adapters supplied with the kit to the board and then plug it into your PC, having first downloaded the drivers for the adapter. You can then start a UART terminal program (9600, N,8,1) and point it at the proper port. You can then configure the transceiver and perform various service functions. While the PER program could benefit from a GUI, it is still quite capable and enables you to experiment with numerous features and parameters.

The most interesting feature of the AT86RF233 is its built-in support for antenna diversity – in this case, 2 x 2 MIMO – which can significantly improve network reliability without increasing the link budget – that is, without using a higher transmit power or an additional low noise amplifier (LNA) ahead of the receiver. 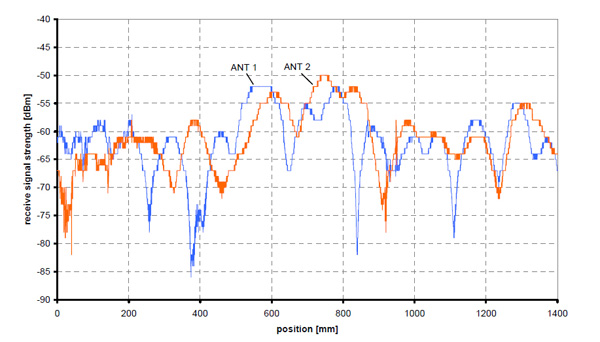 Figure 6: Receive level for each antenna in a multipath fading scenario. (Courtesy of Atmel.)


With the introduction of multipath fading between two network nodes, the signal arriving at each of the dual antennas on the transceiver board can vary considerably over time. Without antenna diversity, these fading effects could quickly result in an increased error floor or loss of the connection between network nodes. Figure 6 shows typical receive levels for each antenna on the REB233SMAD’s radio extender board (REB) in a multipath fading scenario. Switching between antennas and selecting one that receives better increases the reliability of the connection. The AT86RF233 does this continuously and automatically.

The two matching ¼-wave antennas on the REB connect to an RF switch and a balun (see Figure 7). The RF switch in turn is controlled by DIG1/2 on the AT86RF233. 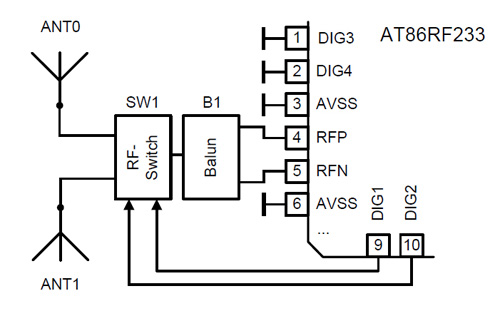 
Receive Diversity
If antenna diversity is turned on (see Figure 8), the transceiver continuously switches between the two antennas while searching for an IEEE 802.15.4 synchronization header (SHR). When a sufficiently strong SHR is detected (Figure 8 (1)), that antenna locks on (Figure 8 (2)) to receive the PHY header (PHR) and the PHY Service Data Unit (PSDU). Upon receipt of a complete frame, the search then continues (Figure 8 (3)) until a new SHR header is detected or the receive state is terminated for whatever reason.


Transmit Diversity
Upon successful reception of a PHY header (see Figure 9 (1)), the transmit antenna may be automatically selected (RX_START), though this is best left until after it has been determined that the frame has a valid FCS (Figure 9 (2)). An acknowledgement frame (RX_AACK) is sent after a predetermined turnaround time (Figure 9 (3)).


The selected antenna will depend on the results of the last data exchange, or you can choose to permanently use one antenna for the receiver and the other for the transmitter. When using the antenna diversity algorithm to select antennas, you will need to fine tune the receive threshold to reflect the realities of the local RF environment.

Low-power wireless networks are enabling a wide range of commercial, industrial, medical, and security applications. M2M applications in particular are a wide-open field for ZigBee and other 802.11.5-based protocols. All such applications could benefit from the increased signal reliability from antenna diversity.

Designers considering such applications would do well to check out Atmel’s REB233SMAD-EK Evaluation Kit, which provides a high-performance platform for both design and development of low-power wireless networks.