ZigBee devices operate on different frequencies in different geographies, though, to date, multi-frequency, multi-profile solutions have been elusive. Now by choosing the right low-power RF transceiver, the world can be your oyster.


ZigBee devices operate on different frequencies in different geographies, though, to date, multi-frequency, multi-profile solutions have been elusive. Now by choosing the right low-power RF transceiver, the world can be your oyster.

The ZigBee® standard has existed for many years and has faced similar challenges to other wireless standards. These challenges include different development stages, early adopter incompatibilities, and many discussions about the right direction to move forward between the ZigBee alliance members.

However, with the introduction of the public application profiles, the standard has reached a stage which can be now called mature — an application layer compatibility primarily achieved by a finalized specification and the ZigBee logo testing procedures. The test houses ensure by their testing program that all devices not only use the same network layer standard for sending data through the networks, but also assure secured communication between the devices — achieved with the ZigBee Pro™ feature set. In addition, testing programs verify that end products with the ZigBee-certified product logos have passed an intensive testing procedure, ensuring that messages sent by the applications follow a defined protocol, as defined by the public application profiles.

Profile compatibility will be made visible to end users by a set of easy-to-recognize logos which show the supported application profile. The currently existing profiles (see Figure 1) are: 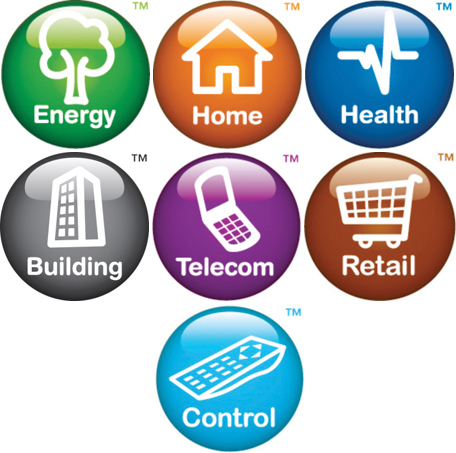 While some of these public profile specifications are still in development, the most important ones have been finalized. There are many certified products in the market based on these profiles.

The profiles that currently have the most significance in the market are Zigbee Smart Energy, ZigBee Home Automation, ZigBee Telecommunication Services, and ZigBee Remote Control.

The ZigBee Smart Energy standard defines devices that offer many types of energy management and control, such as electricity meters, load control units, and in-home displays for direct user interaction with the network. The ZigBee Home Automation standard covers devices such as light switches, dimmers, HVAC, and blind controls.

The ZigBee standard is based on the IEEE 802.15.4-2003 standard and implies that ZigBee applications can use the MAC and PHY features described by this international IEEE standard. The IEEE standard's physical layer specification describes the modulation schemes, data rates, device roles, data transfer concepts, and frequency bands that can be used. The most commonly used frequency is the 2.4 GHz ISM band. The IEEE 802.15.4 standard allows the use of a 250 Kbit/s data rate in this global frequency band. This frequency band is also used by technologies such as IEEE 802.11 or IEEE 802.15.1, which are better known by the terms Wi-Fi® and Bluetooth®.

The IEEE 802.15.4 standard specifies a spread-spectrum technology to enable robust resistance to interference in heavily-used frequency bands in order to ensure the proper operation of ZigBee devices even in the presence of Bluetooth networks. The standard also offers another very useful option: the use of regional frequency bands.

The frequencies that can be used are commonly referred to as "sub-1 GHz," meaning bands located in the range below 1 GHz.

There are four ratified frequency bands which provide applications with a better signal range and propagation due to the lower frequency. The use of these frequency bands show reduced negative effects, inherent with multipath propagation, in indoor environments where the 2.4 GHz signals can be more easily reflected by planar surfaces and metal structures and attenuated by moisture in the air.

Those frequency bands and their related regions are:

The use of those bands allows developers to build products for global as well as regional markets. This also enables products that use identical application and network layers like ZigBee in different frequency bands, with the advantage of flexible RF parameters such as usable output power.

Application segments such as smart metering and home automation also benefit from this, since it is easier to enable products that have a better transmission range or wall penetration. It also allows wireless networks to cover an entire building without employing expensive power amplification circuitry. One advantage of the sub-1 GHz signals is that they enable a direct connection between a meter in the basement with an in-home display on the first floor of a residential building. All that is needed to support such flexible, multi-frequency applications is RF transmission systems that support those different frequency bands.

Atmel® Corporation is one of the few companies that supports the 2.4 GHz band and offers devices that can operate in three of the four mentioned sub-1 GHz frequency bands. In the Atmel AT86RF212, there is a low-power RF transceiver for the IEEE 802.15.4 standard that can be used in North America, Europe, and China (see Table 1).

Together with readily available, pin-compatible devices that operate in the 2.4 GHz band, the developer gets an ultra-flexible solution which addresses different range requirements as well as products that can be designed for regional markets.

All of the RF devices that operate according to the IEEE standard can be used to run identical applications such as ZigBee Smart Energy and ZigBee Home Automation.

These software packages make the application implementation in the different frequency bands very straightforward, since the APIs are identical. In addition, an application developer does not need to write different application code for products to be usable in different regions of the world. This reduces time-to-market and increases the addressable market segments.

The flexibility that is offered with these different public application profiles and RF devices for these four different frequency bands enables versatile products for most emerging wireless markets. Atmel Corporation is one of the first companies to offer the hardware required to run identical ZigBee stack applications in different IEEE frequency bands.