Buck converters using resonant topology are known to deliver higher performance than power supplies based on traditional pulse-width-modulated (PWM) or hard-switched architectures. Even though of late traditional high-density, hard-switching regulators have evolved with improved semiconductor integration, low-on-resistance MOSFETs, and advanced packaging, their design is no longer sufficient to meet new power demands, primarily due to switching losses within the regulator MOSFETs, which increase as switching frequency or input voltage increases.

In addition, conventional buck regulators exhibit higher gate-drive loss due to the Miller charge dissipated within the gate-drive circuitry. Similarly, the high-side MOSFET’s body diode conduction contributes to higher power losses due to reverse recovery and long conduction (Figure 1). As a consequence, these losses must be overcome or drastically reduced to achieve any significant boost in regulator performance. Also, the hard-switching topology requires a relatively large output inductor, which adds to the size and cost of the regulator.

Another, better alternative is to use resonant topology like zero-voltage switching (ZVS), which enables operation at higher frequency and higher voltages without sacrificing efficiency and size. The ZVS-based regulators are also known as soft-switching regulators. Some key benefits of ZVS buck regulator topology include low turn-on losses, negligible body diode conduction time due to ideal rectifier switching, high-frequency operation maintained at high input voltage, simple internal compensation – which allows for high bandwidth, gain, and phase margin – and fast transient response with a small amount of output capacitance. What is more, it offers 20 ns minimum on time to support very high conversion ratios and delivers excellent light-load efficiency due to a high-efficiency biasing system combined with pulse skipping.

As shown in Figure 2, ZVS designs address the high turn-on losses of the conventional regulator by eliminating high-current body diode conduction prior to turn on of the high-side MOSFET, bringing the drain-source voltage of the high-side MOSFET to zero or nearly zero and producing no high-current spikes or damaging ringing. The ZVS action applied to Q1 removes its Miller effect at turn on, allowing the use of a smaller driver and lower gate drive. 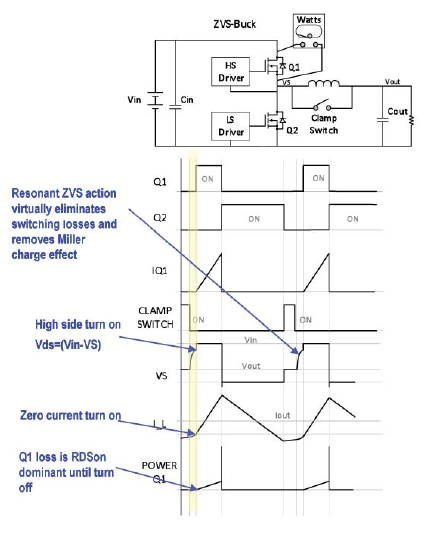 On the other hand, implementing such clever topologies to obtain maximum results in terms of power density and conversion efficiency in DC/DC converters is not trivial. It requires thorough knowledge and experience to build power supplies based on resonant topology, especially ZVS. Over the years, Vicor engineers have acquired and demonstrated special skills in this area, including receiving several patents.

That expertise is manifested in the power supply manufacturer’s new line of buck regulator series labeled PI33xx. Belonging to the company’s Cool-Power family, the ZVS-based buck regulator series delivers maximum power density and high efficiency for point-of-load (POL) regulation. To pack such high-performance DC/DC converters in a compact surface-mount package, the supplier has combined the patented ZVS topology with optimized power semiconductor and passive components. In addition, layout on the PCB substrate is optimized for high performance. Taken together then, these 8, 10, and 15 A ZVS-based buck regulators promise multiple benefits including much higher efficiency, greater power density, and the ability to step down higher input voltages efficiently. Other benefits of the PI33xx series include fast transient response, the ability to interleave regulators using single-wire current share, telemetry features, and a wide operating temperature range. Since members of the PI33xx series are highly integrated with control circuitry, power semiconductors, and support components packed in a 10 x 14 x 2.56 mm LGA system-in-package (SiP), they require very few external components.

A typical application circuit for PI3301 is depicted in Figure 3. As shown, the PI33xx series buck regulator requires only an external inductor and two ceramic capacitors for input and output filtering to form a complete high-performance regulator. No frequency compensation, parametric settings or incremental external components are required. A wide operating temperature range of –40° to 125°C allows for use in almost any environment. 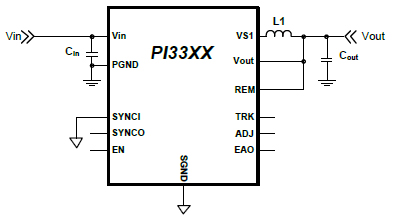 The PI33xx buck regulators can convert input supplies ranging from 8 to 36 V to output voltages from 1 V to 16 V, at output current levels up to 15 A for power delivery up to 120 W. Measured efficiency performance for PI3301, illustrated in Figure 4, shows a peak performance of over 93% for a high step-down ratio. In this case, PI3301 is used to convert 24 V input to 3.3 V output at currents as high as 10 A. In fact, the curve shows that the ZVS regulator can consistently deliver over 90% from medium-load to high-load, and over 80% at low load. By comparison to a ZVS regulator, a high-end, hard-switched conventional regulator’s efficiency is significantly lower for the same input and output voltages, and further drops dramatically at low load. The performance gap considerably widens between the two types of regulators as the input voltage goes to 36 VIN.¹ The efficiency degradation in conventional hard-switching regulators is attributable to high switching losses. degradation in conventional hard-switching regulators is attributable to high switching losses. 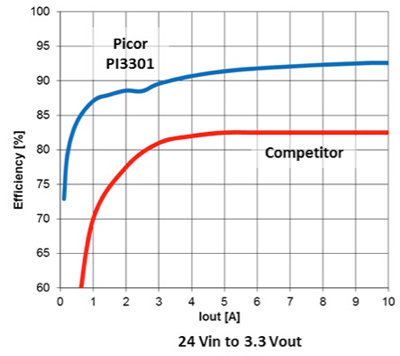 Figure 4: When compared with conventional buck regulators, the ZVS-based PI3301 demonstrates much higher efficiency even at 24 VIN and 3.3 V output voltage.


The ability of PI33xx series regulators to operate up to 1.5 MHz, which is typically three times that of conventional high-density regulators, also reduces the size of passive components. In addition, it lessens the burden on external filtering components thus enabling fast dynamic response to line and load transients.

Vicor recently expanded its portfolio with the release of the PI34xx series optimized for 12 V input operation, which delivers over 95% peak efficiency at 3.3 V output and up to 15 A output current. The input range for this series is 8 to 18 VIN, and the output can be anywhere between 1 and 6.5 V. There are five members of this series.

In summary, because ZVS-based soft switching regulators offer significant improvement in efficiency, power density and transient response at higher frequencies and input voltages as compared to conventional hard-switching regulators, power design engineers would do well to take a close look at the topology and the available parts. For more information on the products mentioned in this article, use the links provided to access product pages on the Hotenda website.