The automation space is making a transition from wired connectivity to wireless. The wireless control of systems is an essential part of the Internet of Things (IOT) world.

The automation space is making a transition from wired connectivity to wireless. The wireless control of systems is an essential part of the Internet of Things (IOT) world. This automation and connectivity is behind the expansion of IP addressing to IPv6, so everything can be independently connected to the net. The automation systems have a number of different wireless standards with which devices can communicate. Most of these specifications and products are available from Hotenda, and have both reference designs and application development boards along with system design kits (SDKs). The key is to understand what type of data and how much the system will be transferring, as well as how quickly the data needs to be there and be available.

For all automation systems, whether single function or those with multiple functions handled through a central processor or FPGA, there is a partitioning scheme required for external communication. The communication function is separated from standard memory management and standard I/O. The separation is due to the communication being a structured synchronous event, whereas most automation I/O derives from control feedback loops and is typically asynchronous. The blocks used are the traditional digital MCU portion that handles data preparation and protocol; a DAC and ADC to convert the data between digital and analog form to be sent over the antenna system; and an RF transceiver to drive the antenna system.

All of these partitions are well supported by the products available at Hotenda. However, the boundaries and internal/external components vary by supplier. One of the major partitioning constraints depends on the choice of wireless protocol. Historically, private RF in the 433 MHz ISM band (garage door openers, etc.) and lower frequencies (13.3 MHz, 27.2 MHz) have used proprietary protocols. For compatibility with legacy projects, these RF interfaces are still available from Linx Technologies at Hotenda (search “RF Receiver, Transmitter, and Transceiver Finished Units”) as transmitter (see Figure 1) and receiver blocks. These systems utilize low data rates (under 19 kbps) and low data sizes. 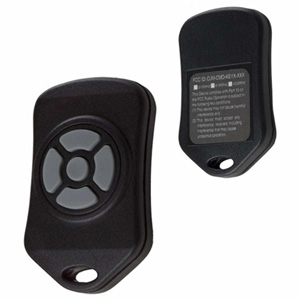 
Most new wireless systems have a number of high speed digital standards from which to choose, with the amount of data being passed and the number of nodes in the network determining the choice of protocol. The dominant choices, all of which are available at Hotenda, are Zigbee® (IEEE 802.15.4), Bluetooth® (supported by the Bluetooth SIG), Wi-Fi (IEEE 802.11 a/b/g/n), and Cellular (CDMA, HSDPA, GSM, EDGE, GPRS). The cellular systems are primarily for M2M (machine-to-machine) networks.

The cellular networks that are supported by these products are based on digital packet data switching. A high percentage of existing systems such as alarm/security systems, automated teller machines, kiosks, POS terminals, and industrial automation were designed for analog telephone communication. With the shrinking availability of land lines and a growing need for digital data results, these systems are moving to wireless. The design partition for these systems is easy since there is an external retrofit for analog modem interfaced systems, whether they are standalone or embedded. Figure 2 shows Multi-Tech Systems, Inc.’s Multiconnect™ AW analog-to-wireless converter. This external converter connects via an RJ11 connection to the analog modem and supports multiple RS232 connections and incorporates embedded flash memory. The flash memory allows for field upgrade and modification of the modem and cellular network connection. This solution preserves the existing design partition of the system and only requires qualification of the wireless aspects of the network. 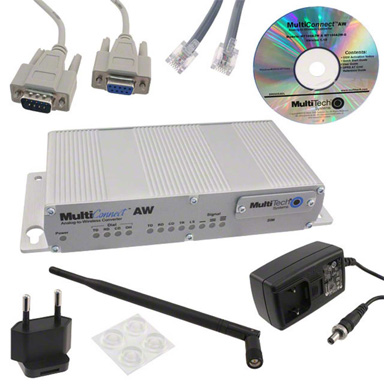 The data interface for automation systems is evolving. Historically the systems communicated simple error codes and status codes with time stamps as the information set. These codes would go to another system that had the translation tables between the codes and the interpretation of the codes. This allowed the “lightest” wire connection between the automation systems and the flow control systems. With wireless communication, the cost of the data traffic, the physical proximity, and logistics of the automation systems is dramatically lowered, which allows for changing the amount and type of data being sent.

The simplest way for new designs to address a wireless network is through a serial port connecting to a finished wireless radio subsystem. There are a number of choices with both standard serial ports (RS232) and USB. This allows an existing system that is architected to provide data, status, and M2M connectivity through traditional point-to-point wired connectivity to work unchanged. External radio kits can simply be connected to the port and the kit handles the IP handshake, data formatting, and analog subsystem functions.

Bluetooth is one of the popular short range two-device connectivity protocols. While it is primarily known as the protocol for cell phone headsets, the communication specification actually supports general data applications. The system is especially useful for communication to short distance receivers and/or mobile devices and computers for tracking the status of automation equipment. Bluetooth supports two classes – Class 1 under the current specification reaches up to 30 meters, and Class 2 reaches up to 10 meters. The current version 2.x specification supports short burst data up to 2.1 Mbps with practical data transfer rates of several hundred kbps. These transmitted data sets are typically in the bytes to kilobytes range. The system as a whole tends to operate under a two percent functional duty cycle. Examples of finished USB subsystems are Laird Technologies’ BRBLU03-010AC and Roving Networks’ RN-270M USB Bluetooth 2.0 adaptor (see Figure 3). Bluetooth networks support both transceivers and access points for extended range and signal aggregation applications.

If more than point-to-point connection is needed, the Zigbee environment supports a mesh network. A mesh network is a multipoint-to-point network that allows for relaying data through adjacent devices (in a 3D space, multi-story facilities, as well as those on the same floor) back to a central network core. The network supports WPAN adapters, access points and modules, developers’ kits, network extenders, sensors, and gateways. A typical application is shown in Figure 4 with an installation for a Digi XBee™/XBee-Pro™ environment. The Zigbee networks support up to one mile of wireless distance at a 250 kbps data rate. This network supports high duty cycle traffic that can include status, IDs, and error codes, as well as collection metrics and the results of environmental sensors. The protocol supports multiple devices talking simultaneously on the mesh as well as multiple interfaces – RS-232, RS-485, full-and half-duplex RS-422, and USB. 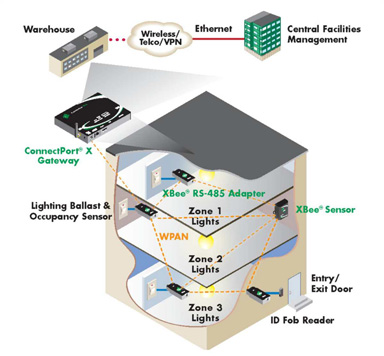 
The dominant legacy connectivity options of the home and industrial automation world are either copper cable Ethernet or EtherCAT. These have well-defined, high-speed data ports that typically connect through an RJ45 connector and operate in the 1 Mbps to 600 Mbps data range at high duty cycles (over 60 percent). As a result, shifting these to Wi-Fi (802.11-based connectivity) is fairly straight forward and does not typically impact performance. These networks can support mid-distances, nominally 70 meters indoors/250 meters outdoors; in the USA under special FCC license you can run 802.11a at 3.6 GHz high power for up to 5000 meters. The a/b/g versions of the protocol all support only one antenna and one transceiver for the data flow. These support 1 Mbps to 54Mbps data rates. The 802.11n version of the protocol supports up to four simultaneous inputs/outputs (MIMO) with each data stream up to 150 Mbps.

Like the Zigbee system, these Wi-Fi networks consist of transceivers, gateways, bridges, access points, extenders, and development kits. Complete solutions for retrofit, such as the Qualtech Airborne Industrial Wireless Ethernet Solution model ABDG-ET-IN5010, are available with either an RJ45 interface or an RS232 serial interface to an 802.11b/g network. These units are currently available in single-antenna drive systems for 802.11a/b/g. Newer designs will be available in upcoming years that support the MIMO environment of 802.11n.

Since these options represent a retrofit to the current wired network environment, a key component of the systems is management of the wireless configuration. These systems have the ability to be upgraded remotely, enabling remote access control, configuration, and data logging. Products such as those from Qualtech feature a common management software platform for the enterprise side that controls their product family, independent of the automation side connection (wired, RJ45, RS232, USB, or other pinout). They are typically Windows-based systems such as the Airborne Management Center (AMC), shown in Figure 5, whose GUIs can have short learning curve. 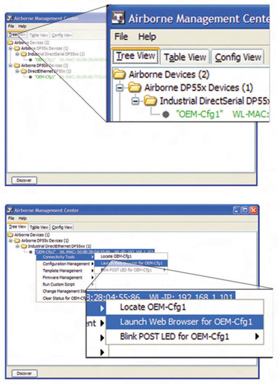 For new designs that have a space and power limitation, an external subsystem is not a practical solution. In this situation, a digital interface to a DAC then to a front-end module (FEM) or mux/PA/filter is recommended. This will handle the transmit side of the system through a matching, opposite-facing set going to an ADC needed for the receive side. A common antenna is used for both the receiver and transmitter pairs.

Front-end modules range in complexity depending on how many different network options are to be addressed. They can be simple one-way outputs, which would require two pieces to complete connectivity. An example would be the SST12LF02 FEM from Microchip (see Figure 6), which is simply an LNA/PA, a filter, and a switch. The switch supports a side bypass channel to the antenna for Bluetooth connectivity on the same band as the 2.4 GHz LNA. 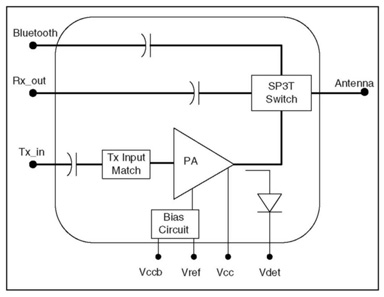 
The next step up is single-band 2.4 GHz 802.11b/g/n and BT transceivers modules, as in the SiGe Semiconductor/Skyworks Solutions part number SE2613T (see Figure 7) which has a power detector, harmonic filter, switch/mux, LNA, PA, and associated channel/device matching. 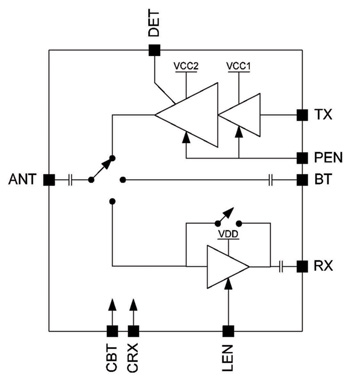 
The higher-end FEMs go all the way up to multi-band MIMO-compatible (802.11n dual band) modules like the Skyworks Solutions SE2595L (see Figure 8). These modules contain one transmit and one receive path architecture for use as MIMO building blocks, with all RF ports being matched to 50 ohms. They include an integrated 2.4/5 GHz PA, 2.4/5 GHz LNA, TX filter, T/R switches, and duplexers, and integrated power detectors, all operating on a single supply voltage of 3.3 volts. 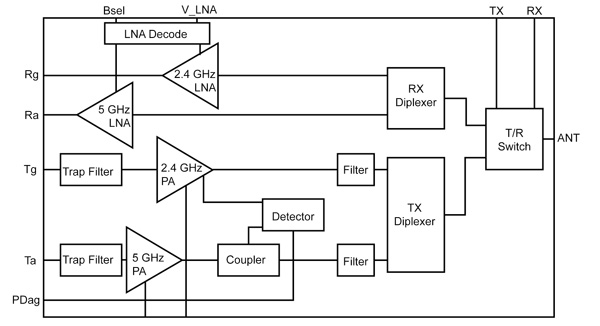 An area of recent concern with wireless systems is data and access security. Once only the domain of the IT world and business communication, the specter of the Stuxnet attack has brought all network-based automation to the realization that data security is needed anywhere there is a data network. Information is not the only thing of value, since being able to disrupt or change business and manufacturing processes has a defined marketplace value and are more difficult to trace. As most developers of automation systems are familiar only with IP protection for the design of the system, the Digi International Embedded Wireless Security Product Training Module is an introductory module on wireless security for embedded applications and is available on the Hotenda site.

To help embedded applications address security in their M2M communication, there are integratable wireless network servers such as the Qualtech WLNG-XX-DP551 series – a ruggedized, secure, high reliability Wi-Fi module. This system not only has full software support, but also features a configurable interface to SPI, Ethernet, GPIO, UART and 802.11 networking. These are in addition to the full RF, network stacks and security/key processing in a single OEM board level component. Figure 9 shows the architecture of module that features an ARM9™ processor, local memory, power management, Ethernet PHY, and a full 802.11 b/g radio.

Consumer and industrial automation systems have transitioned from being in-location managed to being centrally managed. As a result, these systems need to communicate via wireless protocols. To enable this wireless messaging, data converters and standard RF interfaces are used. Hotenda carries these subsystems in the form of components, modules, reference designs and development boards/SDKs.
Supplier
Product Type
Industry
Function