Wireless communication has been used in industrial applications for more than 30 years. Among the first applications where wireless was used was in wireless control of Automated Guided Vehicles.

Wireless communication has been used in industrial applications for more than 30 years. Among the first applications where wireless was used was in wireless control of Automated Guided Vehicles (AGV) and cranes in warehouses where proprietary radios were used to achieve flexible control of the moving devices. During the last 10 years, standardized radio technologies like Wireless LAN (IEEE802.11), IEEE 802.15.4 and Bluetooth technology (IEEE802.15.1) have become the dominating technologies for industrial applications.

The main advantages for using a wireless solution in industrial applications include the following:

Industrial plants consist of multiple devices interconnected in different ways. These varied types of devices include simple data collection units (I/Os) without built-in intelligence, more intelligent devices (sensors with built-in intelligence, single-loop controllers or programmable controllers) and supervisory systems (used as HMI, for data logging and supervisory control). All these types of devices are interconnected using different communication protocols and media types that in some cases can be replaced by wireless technologies to achieve the above listed advantages.

Not just one wireless technology offers all the features and strengths that fit the various industrial application requirements and therefore, standardized wireless technologies Wireless LAN, Bluetooth technology and IEEE 802.15.4 as well as number of proprietary technologies are all used. The main requirement could either be high data throughput, robustness, or low power (the latter especially for battery operated devices). Wireless LAN is often used for production planning, data acquisition, as well as applications where rapid roaming is required. Bluetooth technology is used for Human Machine Interfaces (HMI), programming, and service/maintenance, as well as real-time control tasks. During the last few years, other technologies such as IEEE 802.15.4 (ZigBee, WirelessHart etc.) and Bluetooth low energy technology have become increasingly used for sensors, actuators and other small devices which need to be interconnected.

The adoption of wireless communication in an industrial environment is typically a gradual process. The initial requirements include the creation of islands of wirelessly enabled devices connected to an existing infrastructure/wired network. The wired network may be a standard IP-based network or an industrial fieldbus network. Examples of fieldbus networks include Profinet, Modbus TCP, Profibus, Devicenet, Controlnet or Interbus-S.

This article covers how various wireless technologies can be used to connect devices wirelessly to each other in an industrial setting. It will also describe some specific requirements on wireless communication technology in industrial applications.

Many of today’s industrial devices still use traditional serial interfaces (UART, RS232, RS422 or RS485) as the means to connect to configuration or programming tools. These tools are typically connected “ad-hoc” when a reconfiguration or reprogramming is needed and the tools normally operate on a standard PC. The tools typically use an application dependent or device specific communication protocol to communicate with the device. All these abilities make them good candidates for wireless connections. 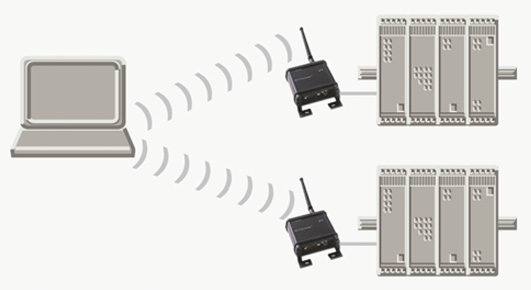 There are two ways in which one can create a serial cable replacement:

The use of Ethernet based communication in industrial communication is increasing dramatically. The most used protocols (MODBUS TCP, Profinet, and Industrial IP) transfer messages on an Intranet using Ethernet.

Ethernet cable replacements are most commonly used in industrial applications where there are mobile, rotating, and temporary installations with either a need for replacing the Ethernet cable with a robust and maintenance-free wireless connection (Fig. 4) or a need to connect to a Wireless LAN infrastructure (Fig. 5). For easy set up and wireless configuration, a transparent Ethernet to a wireless adapter or a gateway is typically used.

Figure 4: A simple point-to-point Ethernet cable replacement based on two Wireless Ethernet Port Adapters. For the wireless connection, Wireless LAN would be used for applications requiring high band width and Bluetooth technology would be used when robust data transfer and/or high system density is needed.

Figure 5: The configuration above is used when connecting devices such as PLC’s and HMI panels to an existing wireless infrastructure which is typically a Wireless LAN network. Whether or not the devices have Ethernet ports or serial port interfaces there are industrial adapters available that can via a standard Wireless LAN access point transfer transparent data over the Wireless LAN network to the wired network backbone.

Roaming is used in data communication for industrial applications where there are moving devices, such as Automatic Guided Vehicles (AGVs), or where the device’s data communication path changes from one access point to another. In these cases, the existing connection performance is affected by the roaming procedure, since a scan for new wireless networks is required and then the established wireless connection must be terminated before a new connection can be up and running.

There are solutions available that provide seamless roaming (Fig. 6) with handover time delays within a few ms. Some of these solutions require access points with supplier specific solutions but there are also others, such as the connectBlue seamless solution, that use standard access points with two or more wireless clients that cooperate on each moving device. An advantage of the latter solution, where several independent devices are used, is the opportunity to combine roaming with redundancy.

Well-known fieldbuses (Profibus, CANBus, DeviceNet, InterBus-S) have a large installed base and a wide range of available products/devices. The large existing installed base is the main reason why fieldbuses are installed in increasing numbers. However, there are tougher timing requirements when replacing a fieldbus with a wireless link than there are when replacing a serial port based device with a wireless link.

“App” in a smart phone and other mobile device

Mobile devices such as iPhone/iPad, Android, Win CE, and LINUX devices are widely used in everyday life. By installing a tailored “app,” the everyday mobile device becomes a powerful and cost efficient tool for industrial applications. An “app” is a third-party software program developed specifically for a smart phone or a mobile device. In industrial applications, an “app” can be designed to gather certain data, to perform specific tasks such as to act as an HMI panel or a remote control.

The wireless communication between the mobile device and the industrial device typically uses a Wireless LAN TCP/IP based network connection or Bluetooth technology through the Bluetooth Serial Port Profile (SPP). Bluetooth low energy technology is a new technology that will be suitable for these types of applications because of its unique features (see more under the heading “Industrial Requirements on Wireless Technologies”).

Wireless communication to sensors and actuators is forecasted to have rapid growth rate in the coming years. The reason for this growth is the increasing requirement to keep better track of energy usage, controlling devices, and utilities. Also, many sensors and actuators are not yet part of a network and a large portion of these will be battery powered in order to lower installation cost.

Sensors and actuators may be of different types. Some sensors and actuators have a high level of built-in intelligence; others are simple I/O devices serving as low-end interfaces to the process equipment. Depending on the requirements, the choice of wireless technology and its accompanying implementation strategy may differ. The software for a simpler sensor or actuator may be implemented directly in the CPU of the wireless chipset.

An example of a more demanding device is a vibration sensor situated on a moving axis. In order to support a complete wireless solution, this application needs an alternative power solution in the form of a battery or other source. Some wireless technologies are better suited for low power modes than others. The wireless interface for these types of devices can be achieved by integrating a simple wireless module into the sensor/actuator or by using a more advanced wireless module with a built-in CPU capacity to handle the sensor/actuator functionality.

Industrial applications have the following high demands on the wireless communication: All these requirements are supported slightly differently by the various wireless technologies. In the segments below, the differences are explained in more detail and which technology is best suited for which industrial application.

Wireless LAN (IEEE 802.11) is well suited for monitoring, configuring and data acquiring, but can also be used for time critical control. Further, the built-in roaming functionality is useful in factory automation applications with moving devices. Implementing Wireless LAN in these types of applications often requires customized solutions such as tailored or proprietary roaming software as well as frequency planning and specific installation means (for example, the use of expensive leakage-cables). With these tailoring of the wireless solution, one achieves stabile latency and low roaming hand-over delays.

IEEE 802.15.4 is available in a number of standards as well as part of proprietary wireless protocols. ZigBee, WirelessHART, and ISA SP-100 are all used in industrial applications and all are based on IEEE 802.15.4. The low power consumption makes it well-suited for battery operated devices. The technologies are mostly used in applications such as energy monitoring, process and building automation. The mesh network functionality t makes it capable to cover wide areas when there are no requirements on low latency.

IEEE 802.15.4 facts:
Table 1: The table offers a quick overview of the differences between the wireless technologies offered in industrial applications.

As more than one wireless technology is often used in parallel, there could potentially be disturbances which are not allowed in an industrial application. Therefore, it is important to optimize co-existence of various wireless technologies in order to get a disturbance-free operation.

All of today’s most used wireless technologies operate in the 2.4 GHz band and they address potential disturbances in the following manner: 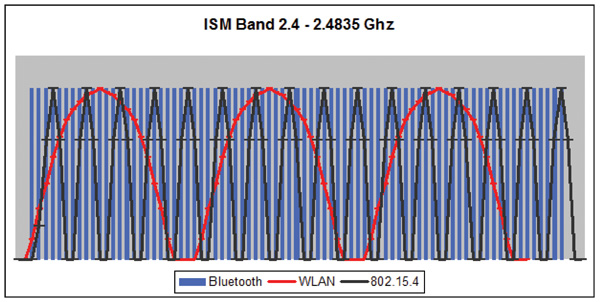 As seen in Figure 7, the 2.4 GHz frequency band is very crowded. This is especially true for Wireless LAN, which is well-established. In order to get disturbance-free communication, one first has to secure that Wireless LAN is not disturbed.

Another solution is to use the 5 GHz band (IEEE 802.11 a) instead of the 2.4 GHz band for the Wireless LAN communication links. However, even though the 5 GHz band is increasing in popularity in industrial applications, there is a large installed base of IEEE 802.11 b/g networks that requires a good co-existence solution.

Bluetooth technology in itself is built to be robust mainly thanks to AFH. But when performing service discovery or establishing a device connection, the Bluetooth activities can disturb a Wireless LAN network. In order to make sure that Bluetooth technology operates smoothly in parallel with other wireless technologies, connectBlue has developed an extended Bluetooth co-existence feature. With the connectBlue Low Emission Mode™, co-existence is solved during service discovery and connection set-up. The Low Emission Mode combines limited output-power with optimization of service discovery and connection set-up parameters without jeopardizing the Bluetooth Specification or interoperability between various Bluetooth enabled products.