This article looks at the protocols that can be used to control smart lighting systems in industrial environments, from ISM band devices to WirelessHART, Zigbee and WiFi.


This article looks at the protocols that can be used to control smart lighting systems in industrial environments, from ISM band devices to WirelessHART, Zigbee and WiFi.

Lighting systems for industrial environments are increasingly making use of wireless technology to improve efficiency and lower costs. Adding intelligent, networked controllers to lighting can allow for the optimum use of resources by switching off lights when and where they are not needed, sometimes in coordination with central control systems, cutting power consumption and reducing electricity bills.

These wireless nodes need to be cost effective in the bill of materials, the power consumption, and the on-going maintenance. Reducing the power consumption of the node not only cuts the power bill, which can be significant in an industrial environment with hundreds or even thousands of lights, but also allows the node to be powered longer by a battery. This reduces the cost and complexity of the maintenance and allows the nodes to be easily retrofitted to the lighting system rather than having to plug in directly to the main power. Reducing the power even further can allow energy harvesting technology to capture energy from the environment and extend the lifetime of the node to many years, a key requirement for industrial systems with long lifetimes.

There is a range of protocols suitable for connecting lighting in industrial environments that fit with the existing industrial control protocols. Zigbee, in the global unlicensed 2.4 GHz band, provides an ecosystem of single chip transceivers that integrate a controller that can also be used for local control such as temperature sensing. These are used in a mesh network so that each node can be used as a connection to the nearest neighbor rather than having to reach across an entire facility. This means the transmit power can be lower to reduce power consumption and this approach is suited to industrial lighting where small amounts of data are sent through the whole network.

For lower cost localized implementations, there are a number of different frequency bands in the lower ISM range below 1 GHz that can provide longer reach with the lower data rates. The Atmel AT86RF231 diversity board demonstrates the capabilities of the Zigbee 802.15.4 compliant 2.4 GHz radio transceiver coupled with a high performance AVR microcontroller to serve as a full function network node that can be driven by two AAA batteries for more than a year. Two ceramic chip antennas increase the link budget in a typical indoor scenario with multipath fading effects. 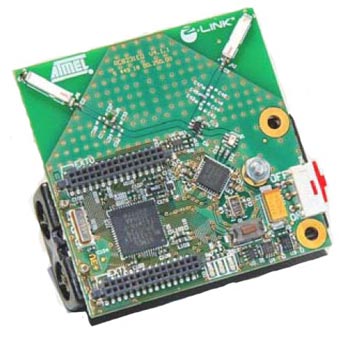 Figure 2: The two sections of the Atmel AT86RF231 diversity board.


Several MAC hardware acceleration functions are implemented in the transceiver, supporting the ability to increase the link budget in a multipath environment by using two antennas to serve as an antenna diversity system. The antenna switching can be configured to be handled automatically by the transceiver.

All components are placed on one side of a double-layer 1.5 mm FR4 printed circuit board, giving a low cost manufacturing solution.

For autonomous operation for industrial lighting systems, the board can be powered by two AAA batteries that are held by the battery clip on the back of the board. The microcontroller software is responsible for appropriate sleep/wake-up cycles of the system to reach a reliable lifetime of the batteries.

The transceiver contains all RF critical components necessary to transmit and receive an 802.15.4 compliant modulated 2.4 GHz signal, with the external components reduced to decoupling capacitors and the crystal. The differential 100 Ω RF signal is converted into a single ended 50 Ω signal by the balun and routed to the antennas via the RF switch (U5).

Two ceramic chip antennas are placed at the top of the board in an orthogonal configuration. This results in diversification of space and polarization and can greatly reduce multipath fading effects. The transceiver can be configured to select an antenna via a register setting, or to automatically select the antenna depending on the receive signal.

Another option is the JN5148-001 from NXP. This is an ultra-low power, high performance, wireless microcontroller targeted at JenNet and ZigBee PRO networking applications for industrial automation. The device uses an enhanced 32-bit RISC processor offering high coding efficiency through variable width instructions, a multi-stage instruction pipeline and low power operation with programmable clock speeds. It also includes a 2.4 GHz IEEE802.15.4 compliant transceiver, 128 kB of ROM, 128 kB of RAM, and a rich mix of analogue and digital peripherals. The large memory footprint allows the device to run both a network stack, such as ZigBee PRO or the proprietary JenNet protocol, as well as an embedded application or in a co-processor mode. The operating current is below 18 mA, allowing operation direct from a coin cell.

Applications that transfer data wirelessly tend to be more complex than wired ones and wireless protocols make stringent demands on frequencies, data formats, timing of data transfers, security, and other issues. Application development must consider the requirements of the wireless network in addition to the product functionality and user interfaces. To minimize this complexity, NXP provides a series of software libraries and interfaces that control the transceiver and peripherals of the JN5148. These libraries and interfaces remove the need for the developer to understand wireless protocols and greatly simplify the programming complexities of power modes, interrupts, and hardware functions.

The transceiver comprises a 2.45 GHz radio, a modem, a baseband controller, and a security coprocessor as well as an output to control transmit-receive switching of external devices such as a power amplifier. This allows for the building of applications that require increased transmit power to give more range or cope with a more hostile radio environment in an industrial setting.

Cost can be a considerable factor with an industrial wireless lighting-control system and the margin may not be available for using a standard protocol. Devices such as the ADF7021 from Analog Devices provide a high performance, low power, highly integrated transceiver using simpler 2FSK/3FSK/4FSK modulation. It is designed to operate in the narrow-band, license-free ISM bands, and in the licensed bands with frequency ranges of 80 MHz to 650 MHz and 862 MHz to 950 MHz. The part has both Gaussian and raised cosine transmit data filtering options to improve spectral efficiency for narrowband applications. It is suitable for circuit applications targeted at European ETSI EN 300 220, the Japanese ARIB STD-T67, the Chinese short-range device regulations, and the North American FCC Part 15, Part 90, and Part 95 regulatory standards. 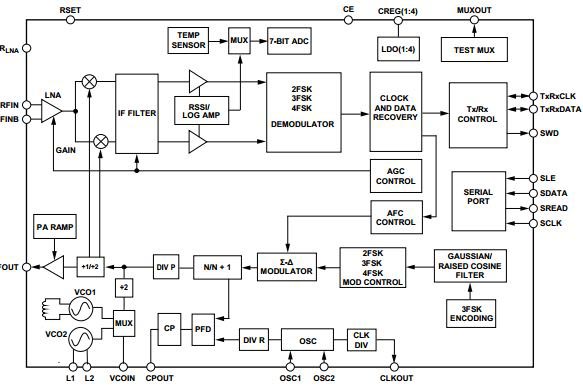 
A complete transceiver can be built using a small number of external discrete components, making the ADF7021 suitable for price sensitive and area sensitive applications.

The transmit section contains dual voltage controlled oscillators (VCOs) and a low noise fractional-N PLL with an output resolution of <1 ppm. The ADF7021 has a VCO using an internal LC tank (431 MHz to 475 MHz, 862 MHz to 950 MHz) and a VCO using an external inductor as part of its tank circuit (80 MHz to 650 MHz). The dual VCO design allows dual-band operation where the user can transmit and/or receive at any frequency supported by the internal inductor VCO and can also transmit and/or receive at a particular frequency band supported by the external inductor VCO.

The frequency agile PLL allows the ADF7021 to be used in frequency hopping spread spectrum (FHSS) systems. Both VCOs operate at twice the fundamental frequency to reduce spurious emissions and frequency pulling problems.

The transmitter output power is programmable in 63 steps from −16 dBm to +13 dBm, and has an automatic power ramp control to prevent spectral splatter and help meet regulatory standards. The transceiver RF frequency, channel spacing, and modulation are programmable using a simple three-wire interface.

A low IF architecture is used in the receiver (100 kHz), which minimizes power consumption and the external component count, yet avoids DC offset and flicker noise at low frequencies. The IF filter has programmable bandwidths of 12.5 kHz, 18.75 kHz, and 25 kHz. The ADF7021 supports a wide variety of programmable features including Rx linearity, sensitivity, and IF bandwidth, allowing the user to trade off receiver sensitivity and selectivity against current consumption, depending on the application.

The receiver also features a patent-pending automatic frequency control (AFC) loop with programmable pull-in range that allows the PLL to track out the frequency error in the incoming signal. The receiver achieves an image rejection performance of 56 dB using a patent-pending IR calibration scheme that does not require the use of an external RF source.

An on-chip ADC provides read-back of the integrated temperature sensor, external analog input, battery voltage, and RSSI signal, which provides savings on an ADC in some applications. For wireless lighting control systems using the 915 MHz ISM band, Silicon Labs has developed a fully integrated mixed-signal System-on- Chip microcontroller and transceiver that runs from 240 MHz up to 915 MHz, the Si1010. 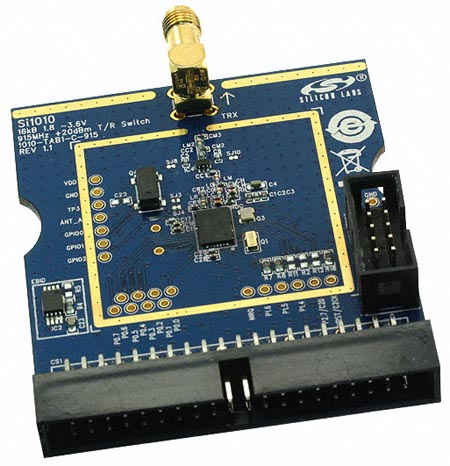 Figure 5: The Si1010 development board from Silicon Labs.


With on-chip Power-On Reset, VDD monitor, Watchdog Timer, and clock oscillator, the Si1010 is truly stand-alone to provide a simple system development. The flash memory can be reprogrammed in-circuit, providing non-volatile data storage and allowing field upgrades of the 8051 firmware. User software has complete control of all peripherals, and may individually shut down any or all peripherals for power savings. Each device is specified for 0.9 to 1.8 V, 0.9 to 3.6 V or 1.8 to 3.6 V operation over a temperature range of -40 to +85 °C for industrial applications. 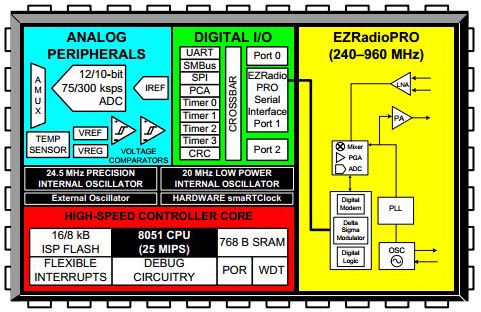 The range of protocols for wireless connections for industrial lighting systems provides the designer with a flexible set of choices to meet the cost and power requirements of a particular facility. Being able to easily integrate a wireless node into an industrial lighting fitting, or retrofit a node onto existing fittings, takes very different approaches and different protocols may be appropriate in these situations.