A look at utilizing linearly dimmed LED drivers with a wireless interface.


Despite the initial investment, solid state lighting (SSL) has proven to be a viable alternative over conventional technologies due to the combined savings in energy consumption and maintenance costs, as well as design flexibility. Furthermore, increased energy savings can be realized with active intelligence such as occupancy and ambient light sensors, as well as external dimming controls to eliminate excessive lighting. Since there are a wide variety of constant current LED drivers requiring a 0-10 V DC input for dimming control available, the focus of this discussion will be utilizing these drivers with a wireless interface.

The overall concept is relatively straightforward. A data stream containing the desired control voltage is transmitted and then received by a module that has been configured to act as a transparent RS-232 interface to a microcontroller. The microcontroller in turn interprets the data stream and loads the appropriate values into the data registers of a digital-to-analog converter to produce the desired control voltage.

Due to the widespread use of devices such as laptops, tablets, and cell phones, the Bluetooth connection protocol was selected for the transmission of the control voltage data stream. On the reception side, the 876-1005-ND evaluation board for the Panasonic PAN1555 was selected for its versatility and ease of use in prototyping.

The selection of the microcontroller was based upon 3.3 V operation and the requirements of having a USART, a programmable internal oscillator, and sufficient yet not excessive I/O. Due to the consideration of future implementations requiring PWM for control and the storage of non-volatile data, the features of PWM and EEPROM were added to the requirements. The PIC12F1822-I/P-ND was ultimately decided upon.

The DAC selection was based upon the requirements of a single supply, an output voltage of at least 10 V, a serial interface, 12-bit resolution, and an external reference input. The LTC1257IN8#PBF-ND proved to be a worthwhile candidate.

In order for the DAC to produce the necessary output range, a 10 V voltage reference is required. The LM4040CIZ-10.0/NOPB-ND was selected due to its ±0.5% tolerance, TO-92 package, and 15mA output current capability.

Several criteria were considered in selecting the power supply for the circuit. First, the supply voltage needs to be sufficient enough to allow the DAC to provide a 10 V output. According to the specifications of the LTC1257, VCC needs to exceed the reference voltage (10 V) by 2.7 V, making the selection of a 15 V supply appropriate. The desire for an enclosed board-mount supply with a minimal footprint and at least 200 mA of output current resulted in the selection of the RECOM Power 945-1068-ND power module.

While the DAC is powered directly from the 15 V supply, the Bluetooth module requires a 3.3 V supply, which will also power the microcontroller. As dropping down from 15 V to 3.3 V with a linear regulator would be inefficient, the 945-1648-5-ND was selected due to the fact that it’s a switching regulator having a small footprint, a maximum input voltage of 28 V, and a 500 mA output capability.

To facilitate powering external devices such as active cooling, the 945-1648-5-ND was chosen to produce a 5 V supply, again due to it being a switching regulator with a maximum input voltage of 28 V and a 500 mA output capability. In conjunction with this 5 V supply, the 296-6549-5-ND “Rail Splitter” was selected to produce a voltage equal to one-half of the DAC output to correspond with, and allow for linear control of the 5 V powered devices. Terminal block part number 277-1274-ND was utilized for connection to the 5 V supply and “Rail Splitter” voltages.

To accommodate connection to the AC power source and the constant current LED driver wires, terminal block part number 277-1247-ND was selected due to its 0.200” spacing, the accommodation of 14-30 AWG wire, and the capability of handling up to 10 amps of current.

The complete schematic using the aforementioned parts and support components is shown below in Figure 1.

The factory default settings on the Panasonic PAN1555 Bluetooth module on the evaluation board need to be reconfigured for use in this particular application. This is accomplished using AT commands sent via a wired RS-232 interface. The use of a “Smart” USB cable such as the TTL-232R-3V3-WE simplifies this task. There are two important considerations to take note of when using this cable. First, in order to make the FT232R in the cable appear as a virtual COM port, it is necessary to download the free USB drivers from FTDI. Secondly, despite the fact that the TTL levels on this cable are at 3.3 V, the cable VCC supply voltage is at the USB port voltage of 5 V. In order to power the evaluation board during configuration, this supply voltage must be regulated down to 3.3 V. Regulation requires nothing more than a couple of components such as the combination of the L4931CZ33-AP 3.3 V regulator and the EEA-GA1H2R2 2.2 μF capacitor, as shown in Figure 2.


The comprehensive step-by-step instructions for configuring the Bluetooth module are available on eewiki.com at the following link: Bluetooth Module Configuration.

Prior to delving into the specifics of programming the microcontroller to receive and interpret the control voltage data stream, the format of the data stream to be transmitted needs to be determined. In this instance, the format that was previously used for the Hotenda Weather Station was decided upon. The format consists of a transmission type character byte, followed by a type identifier byte, followed by three data bytes. Specifically, the character type byte is “D” for data, the identifier byte defaults to “1” as only a single percentage will be transmitted, and the three data bytes consist of the hundreds, tens, and ones values of the desired D/A voltage. As an example, a percentage of 75% would be transmitted as “D1075”.

Having decided on the format that the percentage data will be sent in, the microcontroller can now be programmed to handle the data stream accordingly. The programming process consists of setting up the configuration words (bits), defining variables and specific register bits, setting up the I/O configuration, and initializing the UART. Simplistic yet functional assembly source code to receive the data stream and utilize bit-banging to load the DAC is available on eewiki.com at the following link: Assembly Source Code & Hex File.

It should be noted that the program for this application was written to only interpret and load the DAC with percentages from 0% to 100% in 10% increments.

The transmission of the control voltage data stream using ubiquitous devices such as laptops and cellphones is a relatively simple task. Addressing the latter, one only needs to find an appropriate serial port profile app. In the case of Android OS devices, the Bluetooth SSP app located on Google Play is an excellent choice. Once the cell phone is paired with the PAN1555 Bluetooth module and connected, it allows the end user to select a “Keyboard mode” in which 12 keys can be labeled and configured to send a specific data stream, e.g. “D1050” (50%). An example screen image in which the keys have been labeled and configured is shown below. 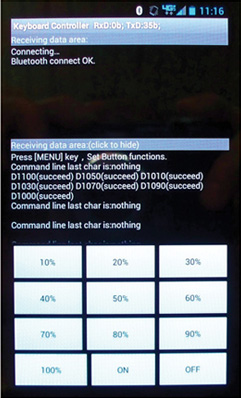 
The second aforementioned method of transmitting the control voltage data stream using a Bluetooth enabled laptop can be accomplished using Microsoft Visual Studio Express™. The first task is to pair the PAN1555 Bluetooth module with the laptop, taking note of the COM port number created on the laptop for the “Standard Serial over Bluetooth link”. Generating the wireless interface is accomplished by creating a Visual Basic TM Windows Forms Application such as the one shown below that utilizes a serial port, and contains buttons and resource images for initiating the transmission of the control voltage data stream. 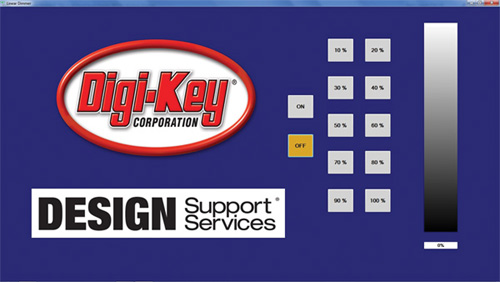 One applicable driver is the LXMG221W-0700034-D0-ND. Due to its compact size, universal input voltage range (90-277 VAC), 700 mA constant current output, wide output voltage range (14-48 VDC), and an input control range of 1-10 V, it’s an excellent choice. Most notable is its low power consumption mode which turns off the LEDs when the control voltage drops below 0.6 V (max).

In the interest of providing a complete pseudo luminaire for the wireless control, the remaining design criteria of an LED, a thermal interface material, a heat sink, optics, and interconnect have also been addressed.

The personal preference of utilizing a cool white LED array (5000K) with a luminous flux greater than 1000 lumens at a modest test current, and a forward voltage near the upper end of the driver output voltage, resulted in the selection of the CXA2011-0000-000P00J050H-ND.

The need for a thermal interface material with exceptional thermal conductivity, while bearing in mind the physical dimensions of the LED array (22 mm square), the 1168-2063-ND was chosen.

As the LED has a forward voltage of approximately 43.8 V @ 700 mA, a heat sink capable of handling a minimum of 31 W is required. The desire for a round form factor with active cooling as well as ease of assembly and installation resulted in the 1061-1088-ND, a 40 W universal heat sink, being chosen. To facilitate the active cooling of the heat sink, the 1061-1006-ND SynJet module, and wiring harness, the 1061-1050-ND, were selected.

The last two design criteria of optics and interconnect were addressed by using the WM4788-ND LED holder. From an interconnect standpoint, the holder not only eliminates the need for soldering to the LED array, it also fastens directly to the heat sink’s 4-40 hole pattern. While the lens cover may not qualify as true optics, it does provide some light dispersion as well as protection for the LED array. 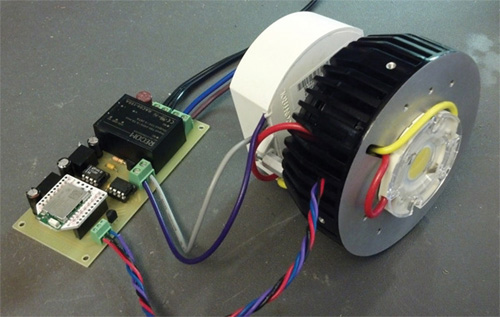 
While the overall goal of the wireless interface and receiver circuitry is to control the dimming of a given fixture, it can also serve as a test platform to allow the evaluation of different combinations of LEDs, interface materials, heat sinks, and LED drivers at various levels of drive current to ensure optimal performance.