The latest wrist-worn wearable computing devices based on the low-power Bluetooth wireless interface that can link to a smartphone or nearby base station.


Products such as smart watches and smart glasses are proliferating, and most of them provide various levels of functionality thanks to multiple sensors, low-power embedded processors, direct-view or virtual displays, and wireless communications links (Wi-Fi or Bluetooth) to connect to a smartphone, host system, or the Internet. Although many of these highly integrated systems provide the desired functionality, they are often “clunky” and lack the style appeal of fashion accessories. That is starting to change as companies such as Apple, Motorola, Google, Samsung, Timex, Pebble, and others introduce stylish smart watches (Figure 1). The same attention to style is also being applied to smart glasses, as well as bracelets, pendants, and even clothing (from sneakers to shirts, and even dresses) to give the products fashion appeal. 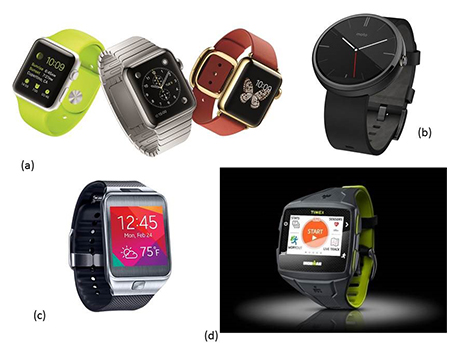 Figure 1: Four of the latest smart watches offer a broad mix of features. The three versions of the Apple iWatch shown (a) use the digital crown to zoom and scroll on the screen, while the Motorola 360 offers a circular face and voice control to send texts, set a reminder, check the weather, and ask for directions (b). Not to be outdone, the Samsung Gear 2 packs a camera and an IR blaster that can serve as a remote control for TVs and other IR-controlled appliances (c). Lastly, the Timex Ironman One GPS+ is targeted at fitness buffs and includes GPS positioning for tracking, an SOS preset message if something should go wrong on an outing, music player, and touchscreen display (d).

With the recent attention garnered by Apple when it released details of its iWatch in September of 2014, many other companies, most already offering first-generation devices, are readying their second-generation devices that will match the bar set by the Apple iWatch. According to Generator Research Ltd., a market research company in the U.K., there are over fifty-one companies already offering smart watches, and still additional companies plan to enter the market.

Making the wearable products fashionable will help ensure that the products will be worn since few people like to be derided for wearing products that lack eye appeal. Although that places a burden on the fashion industry to come up with cases that have eye appeal, it presses even harder on the design engineer to create highly integrated subsystems that occupy minimal space, thus giving the fashion designer more freedom. Additional design challenges are common to just about any portable device: reduce power consumption so that the internal batteries can last for days or weeks between charges. Also, since the goal is to have the final product look sleek, that places an extra challenge to shrink the size of the battery to reduce the system bulk, while at the same time, keeping the amount of energy the battery can deliver consistent.

To keep the sleek look, wireless connectivity built into devices such as the Bluetooth Smart (also referred to as Bluetooth low-energy, BTLE) and low-power Wi-Fi interfaces are the two dominant connections for transferring data between the wearable device and either a smartphone, tablet, or other platform. These wireless interfaces eliminate the need for a connector and cable that early devices used to download data. Wireless charging systems are also starting to appear, thus eliminating the last potential connector cable the device would need.

Additionally, pro-active power management algorithms and circuity must be incorporated into the power-frugal embedded processors and sensors. Additionally, low-power displays (most with touchscreen capabilities) based on technologies such as E-ink, OLEDs or LCDs must work in unison to minimize the power drain while providing a wide variety of functions for work or for play - email, appointment schedules, location information, phone call notifications, heart-rate monitoring, body temperature, GPS positioning, and much more.

What’s in the smart watch?

When you examine any of the smart watches, their basic internal functionality is somewhat similar. The active circuits in the device will typically include a low-power embedded processor, a wireless communications interface (BT Smart, for example), various sensors (motion, pressure, temperature), a battery to power the circuits, and some type of display, often with touchscreen capabilities (Figure 2). Of course, the components selected for each section of the wearable device will vary based on the required performance and functionality that device is designed to deliver. 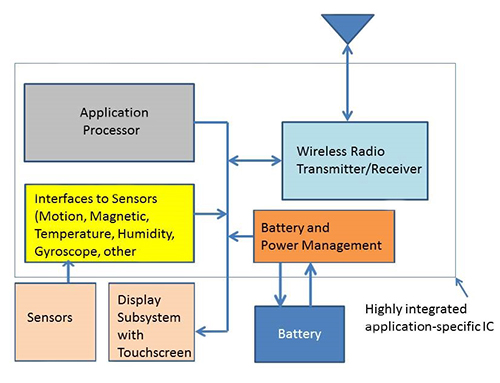 Figure 2: A typical smart watch requires a high-degree of integration. In this system diagram there are basically five major functions — an embedded processor that runs the application code, a wireless interface such as Bluetooth Smart or Wi-Fi, one or more sensors (gyroscopes, accelerometers, temperature, etc.) to collect the data, a display (typically color LCD or AMOLED), and a battery with power-management support.

As an example, let’s look at the user-customizable Pebble E-paper watch (Figure 3), which connects to iPhone and Android smartphones using Bluetooth, alerting users with a silent vibration to incoming calls, emails, and messages. 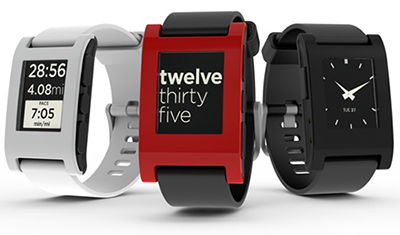 Other parts of note on the motherboard include: As previously shown in Figure 2, an applications processor is a key element of the connected smart watch. Consider, for example, the highly integrated processor STM32F437 from STMicroelectronics, which packs almost all the circuits needed for a smart device. This MCU and its cousin, the STM32F439xx, are based on the high-performance ARMCortex-M4 32-bit RISC core operating at a frequency of up to 180 MHz. The RISC engine features a single-precision floating-point unit (FPU) that supports all ARM single-precision data-processing instructions and data types. It also implements a full set of DSP instructions. Additionally, the processor includes a memory protection unit that enhances application security. System security is also supported by a true random number generator (RNG), and a hardware encryption/decryption engine.

The integrated processor is just one of many highly integrated off-the-shelf solutions applicable to the smart watch design. However, many companies are crafting their own application-specific IC solutions to achieve still higher levels of integration and performance by leveraging process nodes of 65 nm and smaller. This will allow the processors to operate at higher clock frequencies – typically over 250 MHz—without increasing power consumption. The higher clock frequencies, in turn, open up new feature possibilities since the processor has more compute cycles it can throw at more complex applications or run multiple applications simultaneously.

In conclusion, this article has provided a look at some of the latest wrist-worn wearable computing devices available to consumers. These are mostly used in fitness applications and employ body-area networks, based on the low-power Bluetooth wireless interface that can link the wearer to a smartphone or nearby base station, thus eliminating any wires. We have also examined some of the parts selected for these designs.

For more information on these parts use the links provided to access product information pages on the Hotenda website.