Wireless Connections Inside the Home Will Make the Smart Grid Smarter

Full implementation of the Smart Grid will require millions of wireless connections to monitor and control appliances in homes, office systems in businesses and industrial systems inside factories.


Full implementation of the Smart Grid will require millions of wireless connections to monitor and control appliances in homes, office systems in businesses and industrial systems inside factories. ZigBee has a head start in providing those connections but there is unlikely to be a single-technology solution. Meaning, all the alternatives – ZigBee, Bluetooth and proprietary solutions – will have to play together. Fortunately, vendors have provided a wide range of information, documentation, application notes, reference designs and evaluation kits to help you get started.

In the residential market, feeding the Smart Grid with data essential to optimizing a utility’s operations will involve short range communications inside homes and between homes and smart meters using wireless Home Area Networks (HANs). ZigBee appears to be well on its way to being the wireless technology of choice for HANs in the U.S. because more than 50 million ZigBee-based smart meters are already under contract.

ZigBee’s quick start is due to the ZigBee Alliance’s decision to align its Smart Energy Profile precisely with the OpenHAN specification as defined by UtilityAMI, an advanced metering infrastructure developed by a working group of the Utility Contractors Association (UCA).

Designers should take note, however, that ZigBee will almost certainly be required to exchange information with Bluetooth, Wi-Fi, and proprietary products such as Z-Wave, in the home-automation market. As in all technology rollouts, a winner-take-all scenario is highly unlikely and the use scenarios for home automation differ quite a bit in their networking requirements.

Nevertheless, the ZigBee Alliance has already certified about a dozen products that conform to its Smart Energy Profile, including products from Black and Decker, LG Electronics, and a ZigBee-to-Ethernet bridge from NetGear.

A good introduction to ZigBee design ideas is the Freescale Semiconductor video Product Training Module on Hotenda’s website. It provides an overview of IEEE 802.15.4 and ZigBee technologies and discusses their features and benefits. 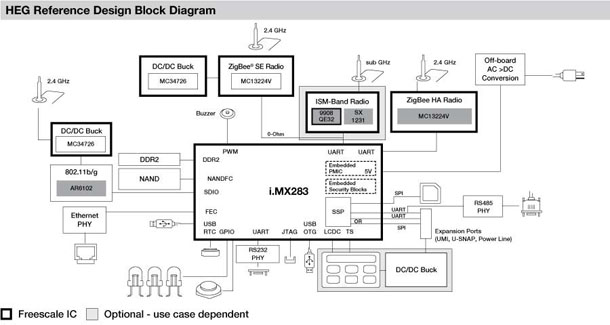 
The reference platform is aimed at jumpstarting design starts around the HAN. This consists of a control board based on Freescale’s i.MX283 applications processor running connectivity interfaces to the smart meter, home automation system, broadband IP network, user interface and a micro-grid generation unit.

Other companies that provide help with ZigBee smart home designs – but usually on a more modest scale – include Atmel, Jennic, and Microchip Technology. Their approaches may better fit the needs of designs of limited scope. NXP Semiconductors, through its recent acquisition of Jennic, offers several modules based on the ZigBee radio chip. The JN5139-001-M/00R1T, is one example that includes an antenna.

It would be a mistake, however, to think that ZigBee will be the only wireless protocol used in the home automation market.

Z-Wave, for example, is a proprietary system with chips and modules sourced by Sigma Designs that offers much of the same functionality as ZigBee. Its third-generation, single-chip solution, the ZW-0301, has the Z-Wave mesh network stack embedded. Flash memory also is available to original equipment manufacturers for embedding their own application software.

In addition to proprietary solutions, the HAN – where ZigBee holds a strong position – will be complemented by PAN (personal area network) use cases such as automatically turning on heating or air conditioning when a person enters a room. In these cellphone-initiated applications, Bluetooth low energy will have the upper hand.

Competition also will come from at least one wired technology. Specifically, the IEEE recently ratified its IEEE 1901 Broadband over Power Line (BPL) standard, which is practically immune to interference and RF barriers, such as walls. The broadband aspect (up to 500 Mbits/s) is, of course, far beyond what a HAN might need, but it also has low installation costs and no visible wires.
Supplier
Product Type
Industry
Function