Wireless technology can provide a convenient method for charging batteries in wearables that lack charging ports for design or aesthetic reasons. In the past, taking advantage of wireless charging methods required expert knowledge in custom RF design and electromagnetic-induction theory. Today, however, designers can implement wireless-inductive charging in a low-power wearable design using available standard parts from manufacturers including Freescale Semiconductors, TDK, Texas Instruments, and Toshiba, among others.

Wireless power traces its roots to the early 19th century when Michael Faraday described how a magnetic field can induce an electromagnetic force in a conductor. By the end of that same century, Nikola Tesla had turned the Faraday law of induction into practice, demonstrating the use of resonant-inductive coupling to light electric lamps wirelessly in his laboratory in New York City. Today, electromagnetic-induction principles already power products as diverse as RFID tags, contactless smartcards, and kitchen ranges and serve as the basis for wireless chargers for toothbrushes, smartphones, and an emerging class of wearables including the Apple watch.

In electrodynamic induction, the application of an electric current to a coil creates a magnetic field that induces a current in a second coil placed properly near it. In fact, the alignment and distance between the two coils is critical for achieving high efficiency. In consumer applications, wireless-charging implementations that require exact positioning typically provide guides to help the user properly align the mobile unit to the required position on the base unit. In contrast, so-called free-positioning wireless chargers typically use multiple coils built into the base station and respond to feedback from the remote unit to energize the proper coils.

Figure 1: A typical wireless-charging system comprises a power-transmitting base station and power-receiving receiver that use electromagnetically coupling principles for power transfer and communications. (Courtesy of Freescale Semiconductor)

Designers can use this communications pathway not only for control signals, but also to send application data back to the transmitter. Although the bandwidth for information is limited, it can be sufficient for purposes such as device authentication, device status, and communication of sensor data collected by the remote device.

The combination of features including power regulation, control, and communications translates into circuit designs with complex power and control logic requirements (Figure 2). For designers, however, semiconductor manufacturers offer a number of solutions that address these requirements and more. 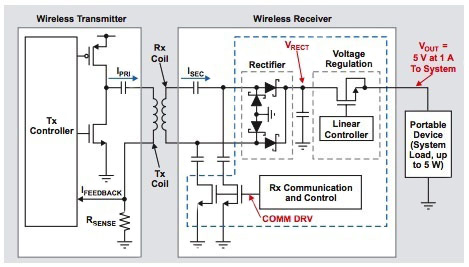 The emergence of standard off-the-shelf solutions for wireless charging builds on the growing acceptance of industry standards that specify base requirements for wireless-charging protocols. Intended to facilitate interoperability between users’ mobile devices and different vendors’ base stations, standard interfaces nevertheless build on one of two wireless-charging technologies — inductive charging and resonance charging.

Inductive charging requires close alignment between transmitter and receiver but typically offers higher efficiency than resonant charging. On the other hand, resonance charging permits greater freedom in alignment and distance between transmitter and receiver while offering the ability to charge multiple devices simultaneously. Industry standards groups including the Wireless Power Consortium (WPC), Power Matters Alliance (PMA), and the Alliance for Wireless Power (A4WP) are in the early stages of collaboration on creating mutually interoperable capabilities.

Designed originally with a focus on larger consumer applications, these standard approaches can nevertheless serve as the foundation for wireless-charging solutions for wearables. For example, although standards such as WPC’s Qi typically use larger A11 50 mm transmitter coils, designers can gain good performance with smaller coils that offer low resistance to avoid large power loss. For example, with its 30 mm diameter, the TDK WR303050 features 0.41 Ω DC resistance, offering a form-factor and power-transfer level more in line with many wearables.

For wireless-charging power control, devices such as the Toshiba TB6865FG and TB6860WBG offer a full complement of standards-based capabilities in readily available parts. As with others in this class, the Toshiba ICs integrate the broad set of capabilities needed to simplify design, requiring only a few external components to support a WPC Qi-compliant wireless charging system (Figure 3).

Figure 3: Devices such as the Toshiba TB6865FG transmitter and TB6860WBG receiver integrate the comprehensive set of features required to simplify implementation of a standards-based wireless-charging system. (Courtesy of Toshiba)

Freescale Semiconductor builds its MWCT1000 and MWCT1101 Qi-based transmitters around a 32-bit 56800EX core. Designed to deliver both MCU functionality and DSP processing power, the processor core enables a comprehensive set of capabilities while consuming less than 30 mA in active mode. The device requires only 30 mW standby power while retaining the ability to sense nearby placement of a receiver. During power transfer, the Freescale devices can exceed 75 percent efficiency. Along with the MWCT1000 and MWCT1101, Freescale offers its MWCT1001A and MWCT1003A targeted for automotive applications.

Texas Instruments offers a number of devices in its BQ50xxx transmitter series and its BQ51xxx receiver series. While the BQ51221 supports both WPC and PMA standards, the majority of devices in the TI receiver series are designed to support WPC Qi-compliant designs. Among these Qi-targeted devices, the TI series includes 5 W receivers with regulated output levels at 5 V (BQ51013A and BQ51013B), 7 V (BQ51010B), and 8 V (BQ51020 and BQ51021). Other members of the series including the BQ51050B (4.2 V output) and BQ51051B (4.35 V) integrate a lithium-ion charger — offering a comprehensive approach for power management in wearables.

Designed for low-power applications, TI’s BQ51003 is a 2.5 W receiver well-suited for wearable designs. By combining the BQ51003 with a low-power linear charger such as the TI BQ25100, designers can implement a complete wireless charging receiving subsystem with integrated Li-ion charge management. For Li-ion cell charging, the BQ25100 enables accurate control of fast-charge currents as low as 10 mA or as high as 250 mA along with precise charge termination down to 1 mA to support small Li-ion coin batteries.

On the transmitter side, the Texas Instruments BQ500211A and BQ500212A offer a full set of Qi-compliant features including the ability to continuously monitor the efficiency of an ongoing power transfer in order to provide foreign-object detection (FOD) and parasitic-metal-object detection (PMOD). Besides offering FOD and PMOD, the BQ500410 supports free-positioning designs built with a three-coil transmitter array. For low-power transmitter designs, the BQ500210 operates with a supply current as low as 8 mA.

For wearables, wireless-charging technology addresses the need for a compact solution that eliminates the size and reliability concerns of a wired power port. In the past, wireless-power methods required expert knowledge of electromagnetic theory and RF design techniques. Using off-the-shelf ICs, designers today can easily add wireless charging capability to even the smallest wearable.