Almost every system today is going wireless, and not just for connectivity to the Internet. Making systems wire-free for connectivity has almost become a mantra for companies producing laptop computers, tablets, flat-screen TVs, Blu-Ray players, audio systems, home medical systems, and even white goods (refrigerators, thermostats, air conditioning and heating systems, etc.). To connect all the devices, a plethora of wireless interfaces that are available include cellular radios (GSM, LTE, etc.), Bluetooth, the multiple forms of Wi-Fi (802.11xx, Miracast, WiDi, WiGig), ZigBee, Z-Wave, and yet other wireless interfaces such as WISA (wireless speaker and audio association).

Previous articles examined many of the developments taking place with Bluetooth interfaces (see, for example, the TechZone articles “Bluetooth Goes Ultra-Low-Power” and “Bluetooth Low-Energy Technology Isn’t Just Another Bluetooth Revision – It’s a Whole New Technology”), so this article will concentrate on Wi-Fi and other non-Bluetooth wireless advances.

In the Wi-Fi arena, the fifth-generation Wi-Fi is called 802.11ac.The ac standard defines the Wi-Fi interface operating at 5.4 GHz, with backward compatibility with the popular 802.11n standard, which is in wide use today. There are several options when implementing the 802.11ac interface depending on the data transfer speed desired – the maximum data rate when a 3 x 3 or 4 x 4 MIMO transmit/receive interface is implemented can hit about 1.3 Gbits/s, and that speed drops to 866.7 Mbits/s for a 2 x 2 channel system. Additionally, a 1 x 1 transmit/receive system can deliver a data transmission speed of 433.3 Mbits/s, which is almost triple the speed of today’s 802.11n Wi-Fi interfaces. Keep in mind, however, that as with all other flavors of 802.11 the actual throughput users will get with 802.11ac will be much less than the raw throughput. Table 1 offers a brief comparison of 802.11n and 802.11ac characteristics.

Wireless speed is the product of three factors: channel bandwidth, number of spatial streams, and constellation density. 802.11ac extends the envelope of each of these (Figure 1). Going from 40 MHz channels to 80 MHz channels doubles the single-stream maximum raw data rate from 150 Mbits/s to 300 Mbits/s. Moreover, while 802.11n supports 64 QAM modulation data rates, 802.11ac adds higher-order modulation (256 QAM) data rates. The higher-order modulation provides a little more throughput, bringing the raw rate of single-stream 802.11ac up to 433 Mbits/s. The majority of the improvement, however, comes from the increase in subcarriers and, consequently, signal bandwidth. 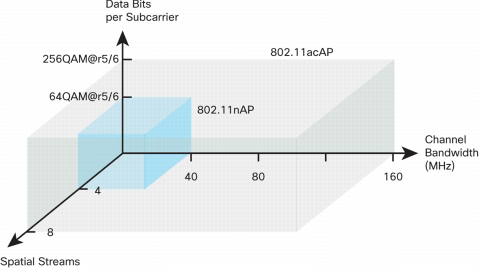 Another feature is expected to boost the reliability of 802.11ac – the much-improved “beam-forming” provides directional signal transmission and reception. Previous 802.11 standards can only receive and transmit omnidirectional signals, which can be subject to significant levels of interference, due to the fact that the signals are transmitted indiscriminately in every possible direction. With beam-forming, you have better control of the directionality of the reception or transmission of a signal, as the relative location of the device is taken into account and the signal is correspondingly strengthened in that direction.

A second extension of the 802.11 standard is the new 802.11ad specification, which formally standardized the 60 GHz WiGig interface. The 60 GHz WiGig interface was developed to provide cable-free video streaming of high-definition video between a laptop computer or media server and a flat-screen HDTV. WiGig devices will deliver data transfer rates up to 7 Gbits/s, about as fast as an eight-antenna 802.11ac transmission, and nearly 50 times faster than the highest 802.11n rate, while maintaining compatibility with existing Wi-Fi devices.

Although the WiGig specification defines protocols to deliver data transfer rates up to 7 Gbits/s, throughput and range will vary, as some products will be designed for high performance, while others will be optimized for low-power consumption. All products based on the WiGig specification will be capable of at least gigabit data-transfer rates. Built-in support for beam-forming will also enable robust communications at a range beyond 10 m.

In case you were wondering, WiGig is the consumer-friendly marketing name that will encompass 802.11ad and future revisions. It does come with a downside, however, due to its 60 GHz frequency. High radio frequencies tend to be poor at penetrating solid objects such as walls, so more often than not their usefulness is highest at shorter ranges. As a result, if you are looking to replace 2.4 and 5 GHz 802.11g/n and 802.11ac signals for your whole house, 60 GHz probably will not be the answer. Chances are you will still have 802.11n for the home network, while 60 GHz WiGig will be used as in-room or adjacent-room technology.

There is still plenty of life left in what now many people call the legacy 802.11 standards, such as a, b, g, n, and other versions. Not all applications require gigabit transfer speeds. That is especially true for many applications in the smart home, in which appliances, thermostats, security systems, vehicles, room lighting, and other devices can wirelessly transfer data and control information. Wi-Fi chips such as the BC57E687C (802.11 b/g and Bluetooth ) from CSR (Figure 2) or similar chips from other vendors that offer 802.11b or 802.11g wireless interfaces can readily handle the network traffic developed internally in the “smart home.” 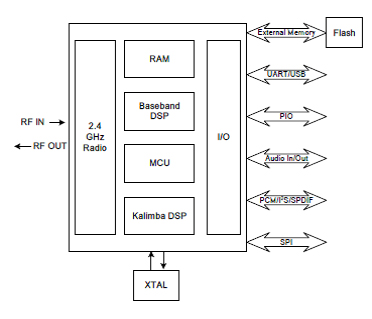 Many applications just transfer a few hundred bytes in a short burst to provide status updates or send a control command to turn on or off a light, start or stop the heating system, or open or close a door. To deal with many of these tasks, 802.11 Wi-Fi solutions are “overkill” and there are many simpler solutions to handle such control tasks. The two most popular interfaces, ZigBee (IEEE 802.15.4) and Z-wave are well suited for these applications, with ZigBee leaning a bit more toward industrial and building management applications, and Z-wave more heavily focused on consumer systems. In the ZigBee arena, many companies offer various chip- and module-level solutions. Some of the vendors include Atmel, CEL, Digi International, and Texas Instruments.

Atmel, for instance, offers a series of low-power 2.4 GHz transceivers for ZigBee, IEEE 802.15.4, 6LoWPAN, RF4CE, and ISM applications. To optimize usage of the radio transceiver in IEEE 802.15.4 and ZigBee applications Atmel offers its Transceiver Access Toolbox (TAT), which, as indicated by its name, is a low-level library that provides the engineer with an easy to use interface to the set of features of the RF transceivers. Basically, TAT is a tool to initiate the radio, look for a clear channel, select a channel, adjust the power level, and provide a register to submit Tx data and acquire Rx data. The TAT is about 2K of code and supports a wide range of microcontrollers such as AVR, AVR32 and Smart ARM devices. (For more on ZigBee, see the TechZone article “ZigBee: A Global Wireless Standard”)

In the Z-wave market, Sigma Designs is the lone vendor at the moment. The company provides a Product Training Module on Z-wave Technology. Tailored for the home, the Sigma Designs Z-Wave RF solution on a single chip provides frequency agility, a good set of peripherals, multiple speeds, and low communications latency. With Z-Wave’s mesh networking, every node becomes a repeater, providing a robust and self-healing network for the consumer that is easy to change. Because Z-Wave is very low power, it is well suited for battery-powered sensors. (For more on Z-Wave, see the TechZone article “The Basics of Z-Wave (And Why You Should Consider It.”)