LEDs are undeniably becoming bright enough to be used in all street lighting applications, while boasting the best available efficiency and lifetime. However, this statement is only true if the luminaire is well engineered. Currently, there are various mature solutions for the electronic and thermal design, but the optics remain a big challenge for many engineers. Conventional street light optical solutions rarely work well with LEDs. Many newcomers, and even some big players in the street lighting business, are working hard to find the best solutions which meet the relevant regulations. Street lighting regulations around the world share the same goals, and differ only in the specific metrics of their requirements. 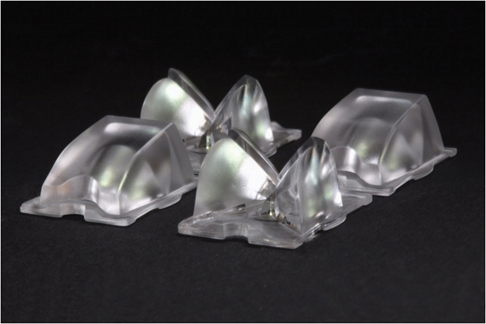 Because operation cost constitutes the largest share of the total cost of street lighting, the efficiency needs to be high. Optically speaking, this not only means the total optical efficiency of the lamp, but more importantly how efficiently the light is directed to the street and to other evaluated areas. For example, a luminaire with a simple reflective shade and a bare array of LEDs has great total efficiency, but because of poor light control, it might be difficult to fulfill the requirements of the existing street light configurations. So, instead of only focusing on how many lumens you can get out of the lamp, one should focus on how many useful lumens will reach the street surface. When using proper optics, you can achieve both: the best possible efficiency and light control.

Getting most of the light to the road is easy, but doing it uniformly is a challenge. You can often see LED street lights which have a so-called hotspot; a high intensity area right under the lamp, in which case the intensity farther away is much lower than at the peak. This will decrease one’s ability to notice contrasts. Ideally, street lighting should be as uniform and as visually pleasing as daylight, but it is enough — and in most installations more efficient — just to fulfill the given requirements. A luminaire producing a uniform light can be used more flexibly in installations, making the same lamp suitable for a wider range of pole distances and uniformity requirements.

Roads are commonly evaluated in two different ways, depending on the relevant regulations. Medium to high-speed roads with fewer interruptions, such as intersections with pedestrian traffic, are normally evaluated on the basis of luminance. This method evaluates how uniformly the driver sees the road evaluation area from a distance. This can be calculated, or, more conveniently, simulated with free computer software such as Dialux (see Figure 1). In order to make these calculations you also have to know the road surface category, since the amount of diffusion of different road surfaces varies. 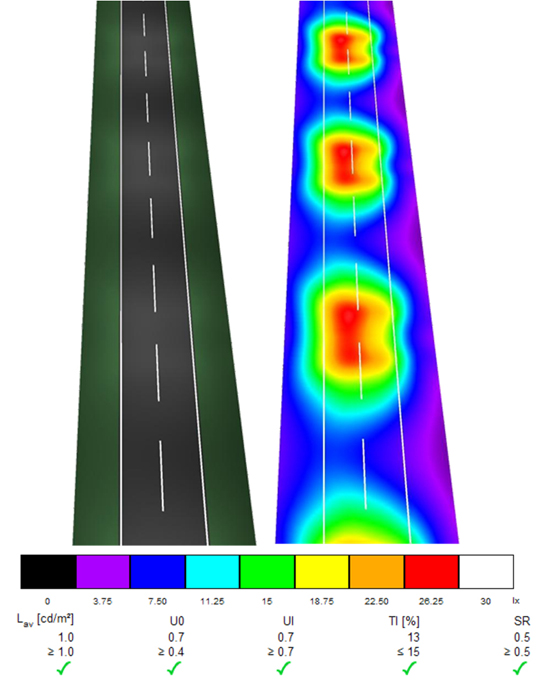 Figure 1: An example of a street lighting simulation, showing illuminance and luminance values.

On streets with low-speed traffic and more interruptions, the driver usually keeps an eye on a close distance and surrounding traffic. For these kinds of streets and other areas, such as pedestrian crosswalks, parks, and parking lots, the requirements are given in illuminance. This is a measure of the incident light which can be read with a lux or foot-candela meter at different points, without considering where it will reflect to and from the road. Luminance and illuminance uniformities do not go hand in hand, but, in general, more uniform incident light does seem more uniform from a distance.

Sometimes when the sun is shining from close to the horizon, sunglasses or a sun visor should be used to reduce road accidents and headaches. However, you cannot use road lighting as an excuse to wear your cool shades, because glare is also controlled by regulations. Glare is caused by the incident light coming from vertical angles between 75 degrees and 90 degrees. There are two types of glare: discomfort and disability glare. Disability glare affects visibility and safety.

Glare is regulated with cutoff classifications and glare index ratings, and, in many higher-speed roads, it is regulated with a threshold increment (TI percent), which calculates how the driver experiences the glare, taking into account the adapted light level.

Glare with upward light of over 90 degrees is considered to be light pollution; wasted light that could be directed to the road, not to the sky or to the bedroom windows of the neighborhood. The Illuminating Engineering Society of North America (IESNA) has categorized luminaires into four different cutoff categories from non-cutoff to full-cutoff. The categories are defined by the relative maximum peak intensity in the glare range, vertical angles from 80 degrees to 90 degrees, and the relative peak at skyglow range of 90 degrees and above. With many lens optics and luminaires having a spherical protection cover, some stray light may appear, making it hard to reach the most desired full-cutoff classification, which is becoming a more and more common requirement nowadays.

However, in many cases the glare can be blocked or reflected by integrating a shade into the lamp fixture. Non-cutoff luminaires are allowed to produce an unlimited amount of light pollution and glare, but they are mainly accepted in urban areas such as shopping streets and parks. Even if the glare is well controlled in the lamp, it should be noted that glare and light pollution are increased if the lamp head is tilted to direct more light to the street side. This can be prevented by using asymmetrical beam optics designed for lamps and installed parallel to the street (see Figure 2).

In addition to the effective lighting regulations, usage and existing infrastructure set further targets and market requirements. The requirements for the beam angle and the beam pattern come from the need to illuminate a specific road with a specific installation configuration. These configurations are often existing arrangements repurposed for conventional street lights which need to be replaced with LEDs. For new roads, the pole configurations can be optimized for existing luminaires. Some specific arrangements have become well established for the most common road lighting situations, creating a demand for street lights with a beam that works efficiently and flexibly in those popular arrangements. 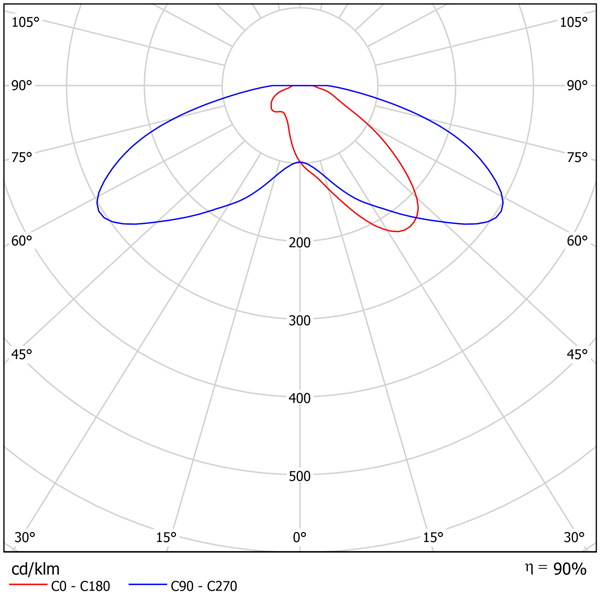 Beams for the busiest urban roads, highways, and expressways tend to be the horizontally narrowest beams requiring a shorter pole distance. One reason is that they are normally mounted higher to illuminate more lanes and keep the lighting extremely uniform with better efficiency. It’s easier and more efficient to ensure uniform light control when the poles are closer to each other. However, for practical reasons, the pole distances can be very long, until the view angle becomes too wide, causing too much glare.

Lamps for common roads normally need to work with a longer pole distance, and the height of the poles is normally about the same as the road width. This type of road needs a fairly powerful lamp that has a wide and uniform beam with good glare control.

Residential streets normally have the shortest poles and the longest pole distances. Here more glare is allowed and less uniformity is required. These lamps are typically the least powerful, as they are mounted low and are not required to be particularly bright.

For urban areas, and especially for parks, commercial streets, and parking lots, wide and symmetrical round and square beam patterns are quite popular. These luminaires are not always designed to be very efficient or powerful, but instead to constitute an aesthetically pleasing part of the city’s light architecture.

The IESNA has categorized beam patterns into five different types in order to facilitate light installation planning and marketing (see Figure 3). However, these classifications often dominate the decisions too much, because they are based on an ideal street light beam which many luminaires cannot attain. For this reason, the beam type number does not tell anything about the quality of the street light. For example, a type III medium beam, which is probably the most popular beam type, can have very non-uniform illumination and excessive glare which does not meet the regulations in a typical installation. 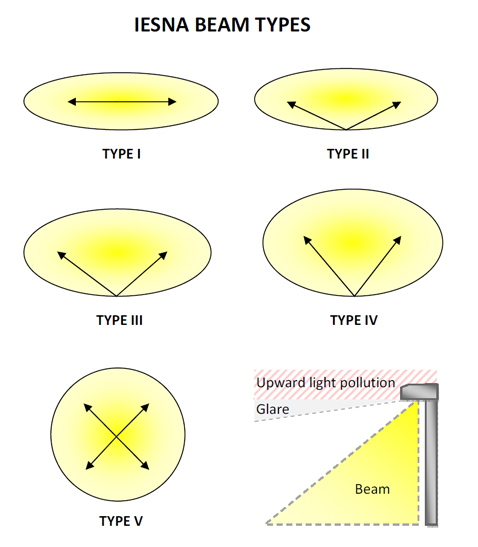 Ledil has a vested interest in providing optical solutions for different street lighting situations. We are happy to provide supportive illumination engineering for customers by email.

At the moment, we have a unique asymmetrical series of lenses, Strada-T, that are designed to be used alone or in different combinations. The Strada-T lens series (see Figure 4) is optimal for the most common street lighting situations. Ledil is also constantly growing its street light optics portfolio with new types of optics, such as sealable and modular lens arrays, so updates are to be expected shortly.