Learn about the Industry 4.0 revolution and how it’s being fueled by sensor advancement including products from Omron, SparkFun, and Freescale.

From about 1760 to 1840 a surge of industrial activity fueled by steam and water power brought people off of the farms and into the factories. This first industrial revolution eventually gave way to a second wave, characterized by assembly lines and mass production, where goods were made faster and cheaper than ever before, and where efforts were fueled by the ready availability of electricity. A third “revolution,” based on advances in electronic and IT systems, further automated production in the last century. Today, we’re at the junction of cyber-systems, physical systems, and networked communications, combining smart machines into truly intelligent distributed systems. Taken together these elements form phase four—often called Industrial Internet of Things (IIoT) or Industry 4.0—which will create smarter, more competitive factories by connecting machines and devices together to enhance the productivity, efficiency, and operation of our manufacturing facilities.

Front and center of the Industrial Internet of Things are the collection, delivery, and analysis of sensor data via an enterprise cloud. Advances in cloud technology, network infrastructure, and connectivity enable the delivery of sensor data to the cloud from industrial wide-area networks (WAN). Continuous monitoring and the rapid processing of this huge volume of data allows industry to perform predictive and preventive maintenance, as well as deliver streaming updates, alarms, configuration setting changes,  and command instructions. Many sensors are being developed to help meet the challenge of IIoT, including those tied to motors, industrial processes, and cloud communications. This article will look at some example sensors and discuss how sensor advances are fueling the revolution called Industry 4.0.

Challenges surround the sheer volume of data disseminated from a device to the cloud and back again. Data overload is a significant challenge as the number of data packets that must be handled in the WAN will be an obvious source of network bottlenecks. As a result, while sensors are in place to collect data, old methods of getting that data to the cloud just won’t work. To bring the data back to the enterprise, there must be flexibility in the network to pick and choose the data that is relevant and the number of packets processed by the network needs to be reduced.

Security will become a top priority as well; once products themselves are involved in communications, there will be greater chances for malevolent attacks.

However, opportunities are abound. According to the research firm marketsandmarkets, today’s Industrial Wireless Sensor Network (IWSN) is comprised of such sensors as temperature, pressure, flow, level, chemical and gas, motion and position, and image sensors, all of which can be monitored, controlled, and troubleshot remotely. Applications can be found in various industries, including mining, food and beverages, medical and healthcare, and power and utility. The IWSN system market, valued by marketsandmarkets at $401.23 million in 2013, is expected to jump to $944.92 million by 2020, representing an impressive CAGR of 12.96%.

A cloud-enabled sensor network allows multiple IWSNs to interoperate simultaneously for many applications. This cloud virtualizes the sensors and delivers sensing as a service to customers at a price that is much lower than would be possible using an ad hoc approach.

Unlike the CIM (computer integrated manufacturing) era of the late 1980s, the goal of Industry 4.0 is not to banish people entirely from the factory floor. Instead, factory jobs will become more flexible to match the flexibility in processes. Flexibility will also be of critical importance in production lines as all personnel and all machinery will be networked. Workers will also be more knowledgeable regarding each step in the process—from production of individual units of work through final assembly.

Recognizing that humans have an important role to play in overseeing the entire production system and acting as creative problem solvers,  Industry 4.0 is designed to bring people and advanced machinery together in a harmonious blend.  One new module that epitomizes much of the benefits of immediate sensor feedback and the real-time nature of the cloud is the Omron HVC-P Face Recognition module (Figure 1) with 10 OKAO Vision image-sensing algorithms. The Human Vision Components (HVC) module integrates a camera, processor, and external interface onto one PCB. The device uses a UART interface to deliver data on the person or people it sees.  This data capture is important where people and machines interact. 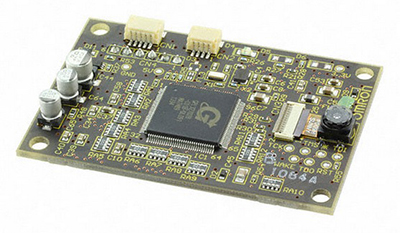 SparkFun Electronics SEN-12670 Evaluation Board for the MAG3110 (Figure 2) provides access to the Freescale MAG3110 energy efficient three-axis digital magnetometer. The board breaks out all of the pins for the MAG3110 to a standard 0.1" header and also supplies the necessary filtering capacitors. The small Freescale device can be used in conjunction with a 3-axis accelerometer for an orientation- independent electronic compass that can provide accurate heading information. 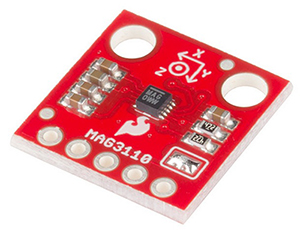 Figure 2: The SparkFun Eval Board for the MAG3110.

The MAG3110 measures magnetic fields with an output data rate (ODR) up to 80 Hz. The output data rates correspond to sample intervals from 12.5 msec to several seconds. The combination of the Xtrinsic MAG3110 magnetometer, MMA8451Q accelerometer and eCompass software enables a complete compensated electronic-compass solution to be realized. When the eCompass subsystem is coupled with a GPS or other location-aware subsystem, direction-dependent, location-based asset analysis can be performed. The ruggedized device measures only 2 mm x 2 mm x 0.85 mm with 0.4 mm pitch. 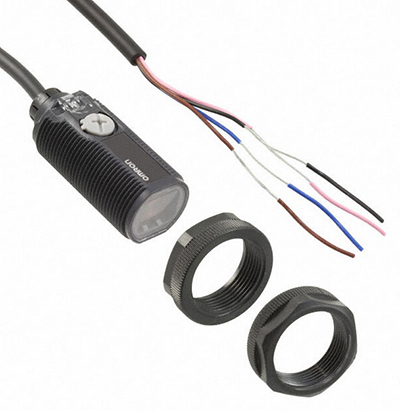 The place on today’s factory floor where intelligent sensors and complex software redefine industrial activity is changing rapidly. This is an entirely new dawn in manufacturing and within the next few years the results will most likely be unrecognizable from today’s industrial environment—and that’s what makes it a revolution. Industry 4.0’s smart factory will be the home of robots and machines that can talk to each other and deliver information regarding the next step in the production process. Sensor intelligence, autonomy, cloud-enabled networks, and the interaction of real and virtual worlds all describe the concept. Fueled by virtualization, miniaturization, embedded software, and rapid innovation, Industry 4.0 will combine these technological efforts and once again rewrite industrial history.