Red, green and blue LEDs are useful for indicators or decorative lighting, but are generally not suitable for mainstream lighting that requires "white" light, which is the result of mixing several different wavelengths.

Red, green, and blue LEDs are useful for indicators or decorative lighting, but are generally not suitable for mainstream lighting that requires “white” light, which is the result of mixing several different wavelengths.

LED manufacturers targeting the mainstream lighting market have come up with a novel technique to convert an LED’s monochromatic emissions into white light by employing phosphor to create a Stokes shift and alter the wavelength of the original emitted light to a spectrum of shorter wavelengths approximating white light.

Obeying the laws of quantum mechanics

LEDs produce light by the recombination of charge carries (electrons and holes) in the depletion region of the p-n junction making up the diode. During recombination, the electron-hole pair drops into a lower energy state by emitting a photon.

Because the laws of Quantum Mechanics govern the recombination, the emitted photon has a specific energy, and therefore wavelength and “color,” determined by the bandgap of the material making up the LED, as seen in Figure 1. The larger the bandgap, the shorter the wavelength of the emitted light. 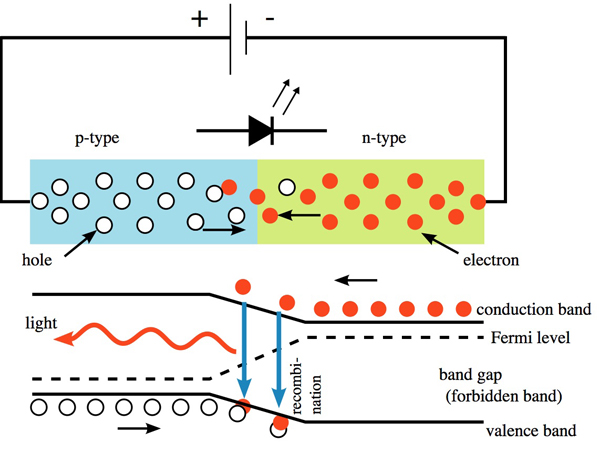 Figure 2[1] shows how the bandgap of various common semiconductors used for LED manufacture varies with the materials’ lattice constants, which is the distance between the unit cells in the crystal structure. The different colors of the emitted photons are listed at the top of the figure. 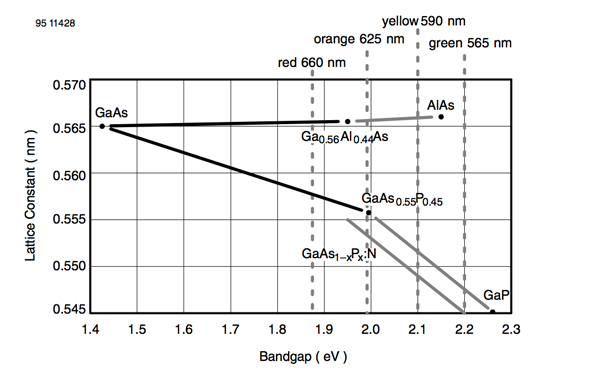 There are two techniques for producing white light. The first is an additive technique combining the light from red, green and blue LEDs, and is discussed in detail in a previous TechZone article. This is a relatively expensive method because it requires three LEDs each with their own driver circuitry. It is gaining popularity for backlighting LEDs such as those used in TVs (read more in this TechZone article) where the additional cost is justified because the “quality” of the emitted white light can be more easily controlled to optimize the TV picture.

The second technique uses blue LEDs combined with phosphor. Blue light from the LED is absorbed by the phosphor, which then re-emits it as white light. This is a popular technique with LED makers because only one LED is required instead of three for the additive method, ensuring a compact and cheaper solution with fewer thermal management challenges. There is one big downside: a reduction in efficiency.

The phosphor used for high brightness LEDs is the specialized material yttrium aluminum garnet (YAG) doped with the rare earth element cerium. [2] This phosphor absorbs some of the blue light from the LED and then re-emits it across a broad range of wavelengths comprising some green and red, and a lot of yellow.

The phosphor can be “fine-tuned” by doping with other materials until the light output closely matches the “warm,” “neutral,” and “cool” whites demanded by consumers of LED lighting.

The phenomenon behind the transformation of blue light to white light by absorption and re-emission from phosphor is known as the Stokes shift, named after Irish physicist George G. Stokes who described the effect in an 1852 paper.

Photons from the blue LED are absorbed by atoms or molecules in the phosphor, raising the constituent electrons to a higher energy level. The electrons rapidly give up energy by re-emitting photons of a lower energy, and hence longer wavelength, and some heat. Green, red and yellow photons have a longer wavelength than blue.

Figure 3 shows the emission spectrum from a white LED. The peaks from the LED’s unabsorbed light and the Stokes shifted photons are clearly visible. 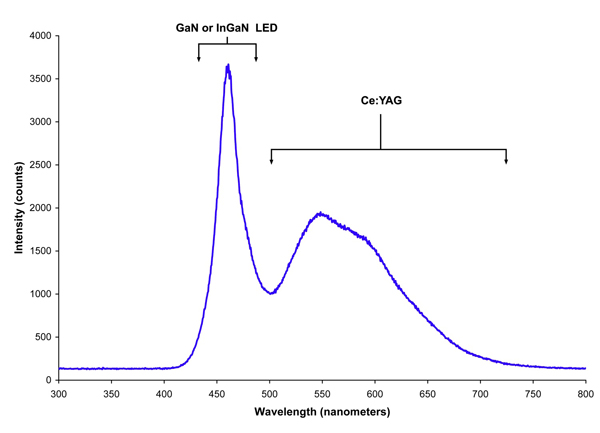 Loss of energy to heat during the Stokes shift, and the fact that many of the photons emitted from the phosphor travel back toward the die rather than outwards from the LED, reduces the efficiency of the device. Recent studies from research groups at Rensselaer Polytechnic Institute in the U.S. found that about 60 percent of the light is reflected inward from the phosphor layer. [3]

Because of this, manufacturers such as OSRAM, Cree, Seoul Semiconductor and Toshiba have worked hard to improve efficiency in white LEDs.

One technique used is novel LED packaging, such that light emitted back toward the die from the phosphor has an opportunity to escape from the sides of the device.

A second technique replaces the powdered phosphor layer with a transparent “monolithic” phosphor. Powdered phosphors are mixed with silicone to help adhere to the LED package, but this produces many phosphor and silicon interfaces that scatter photons back into the package. Monolithic phosphors eliminate these interfaces dramatically, reducing scattering and improving light output.

A third method is to add a multi-layer thin film selectively reflecting filter between the blue LED die and phosphor layer. This allows the blue light from the LED through while reflecting yellow inward emissions from the phosphor back out of the package. [4]

OSRAM has recently set a new laboratory record of 142 lumens per watt (lm/W) for the efficiency of a warm white LED light source (at a correlated color temperature of 2,755 K). The company explains that bright warm white light with high efficiency is particularly important for lighting applications in the residential sector. This efficiency was measured under standard conditions with a color perception that closely matched that of a traditional incandescent lamp.

This device, still in the laboratory stage, isn’t on the market today, but OSRAM’s OSLON SSL range of white LEDs is commercially available and features devices with efficiencies up to 77 lm/W.

For its part, Cree has reported an efficacy record of 208 lm/W for a white high power LED. The company says this performance was achieved at a correlated color temperature of 4,579 K. The tests were conducted under standard LED test conditions at a drive current of 350 mA at room temperature.

This level of performance is not yet available in Cree production LEDs; however, the company does offer its XLamp range with efficacy values of up to 125 lm/W. Other high-power white LED suppliers include Seoul Semiconductor and Toshiba.