Home » Media Library » Articles Library » What Is the Color Rendering Index and Why Is It Important?

What Is the Color Rendering Index and Why Is It Important?

A description of the Color Rendering Index, and a look at how some contemporary white LEDs stack up against the conventional competition.


In the middle of the last century, scientists reasoned that it would be useful to classify how well different types of illumination affected the perceived color of objects on which their light fell. It was thought that such categorization would help lighting engineers specify the type of lighting that would suit a given application. Therefore, the Color Rendering Index (CRI) was born.

The index allows lighting manufacturers to target their products at different markets. In a photographer’s workroom illumination of a high CRI is important, whereas for street lighting, CRI is sacrificed for the sake of efficacy.

LED manufacturers have embraced CRI in order to allow a direct comparison of their products with conventional lighting. The ability to compare light sources in this way is useful because it helps to convince consumers that solid-state lighting is a viable alternative for mainstream lighting. However, some have questioned the validity of CRI testing for white light LEDs formed from grouping red, green, and blue chips because consumers report the perception of color under such illumination is much more accurate than the low CRI would seem to suggest.

This article defines CRI, explains how products are tested and classified, and takes a look at some contemporary white LEDs to see how they stack up against the conventional competition.

CRI is a quantitative measure of the ability of a light source to reproduce the colors of various objects faithfully in comparison with an ideal or natural light source. The index was formalized by Commission Internationale de l'éclairage (CIE, or “International Commission on Illumination” in English) as “Color rendering: Effect of an illuminant on the color appearance of objects by conscious or subconscious comparison with their color appearance under a reference illuminant.”

CRI is calculated from the differences in the chromaticities (or ‘color appearance’) of eight CIE standard color samples when illuminated by the light source under test and then by a reference illuminant of the same Correlated Color Temperature (CCT). (See the TechZone article “Defining the Color Characteristics of White LEDs.”)

For CCTs less than 5,000 K, the reference illuminants used in the CRI calculation comply with the spectral power distribution (SPD) of black body radiators. For CCTs over 5,000 K, imaginary SPDs calculated from a mathematical model of daylight are used. These two reference sources were originally selected to approximate incandescent lamps and daylight.1 Figure 1 shows the SPD for daylight compared with some common light sources, including white LEDs. 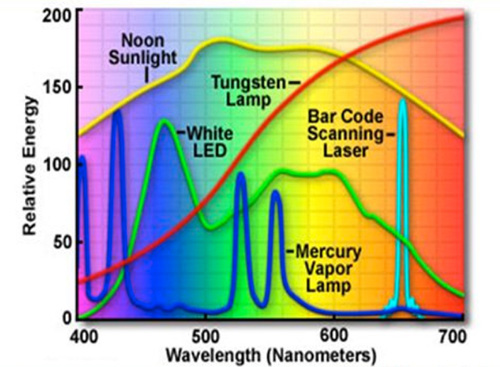 The smaller the average difference in chromaticities for the eight samples between the reference illuminant and the light under test, the higher the CRI. (The actual method used to perform the CRI calculation is complex and beyond the scope of this article, but interested readers can find more information on the technique in Reference 2. Proprietary software is also available to simplify the process.) The color samples cover the hue circle, are moderate in saturation, and are approximately the same in lightness. Data for six additional test color samples representing a strong red, yellow, green, and blue, as well as complexion and foliage colors are also available.

The CIE issued a technical report in 1995 detailing how to perform this “test-color method.”3

Natural light is classified as having a CRI of 100, the best possible. Lower CRI values indicate that some colors may appear unnatural when illuminated by the light under test. Incandescent lamps have a CRI above 95. This high value, meaning that colors under traditional bulbs render well (with the exception of darker blues), is cited as one of the reasons why consumers shy away from swapping these energy-inefficient devices for greener technology (Figure 2). 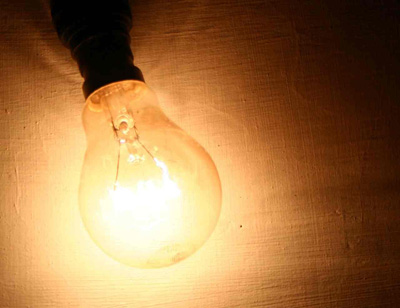 Measuring the CRI of LEDs

In general, the further the SPD of a light source deviates from the “full spectrum” of daylight, the worse the CRI. An extreme example is the light from a sodium-vapor streetlamp that emits around 90 percent of its light in the yellow part of the spectrum (around 589.3 nm). Consequently, sodium vapor lamps have a CRI of 0.

LEDs produce white light using two methods. The first is to use red, green, and blue (RGB) LEDs closely grouped together so that the light mixes to trick the eye into seeing ‘white’. A second technique (which has proved more popular for mainstream lighting) is to use a royal blue LED combined with an yttrium aluminum garnet (YAG) phosphor. The phosphor absorbs some of the blue light from the LED and then re-emits it across a broad range of wavelengths comprising some green and red, and a lot of yellow. (See the TechZone article “Whiter, Brighter LEDs.”)

Figure 3 shows the SPD for a white light LED consisting of individual RGB devices. Hardly surprisingly, the spectrum exhibits peaks corresponding to the red, green, and blue sources. Because this spectrum is very different from the full spectrum for daylight, this type of white light LED performs badly, recording a CRI of 27. However, this is not the whole story because consumers report that the white light generated by commercial RGB LED clusters is visually appealing and makes colors look natural. One possible reason for this reaction is that this type of LED typically tends to increase the perceived saturation of most colors without producing objectionable hue shifts.4 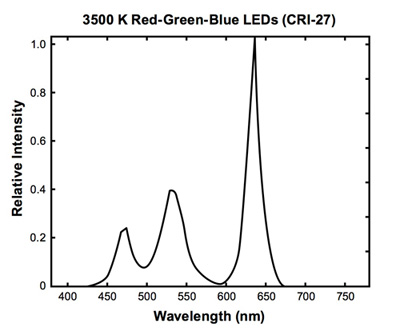 The more common royal blue LED/YAG phosphor white LED more closely approaches the full spectrum of daylight. Figure 4 shows the SPD for a Philips Lumileds LUXEON 3535 series LED across a range of CCTs. This device has an efficacy of 103 lm/W (at 100 mA/3.1 V). Manufacturers of phosphor-type white LED, including Philips Lumileds, spend a lot of dollars “tuning” their phosphors to emit a wider spread of wavelengths in order to improve the quality of light and the subsequent CRI. The Philips Lumileds’ device has a CRI of 82.

CRI has worked well as a benchmark for lighting, particularly in situations where it is important that artificial light renders colors accurately, such as factories and offices. Consumers have come to enjoy the benefits of high-CRI lighting, because the incandescent bulb, the mainstay of domestic lighting for over a century, performs well in this respect.

LEDs offer many advantages over traditional lighting, including efficacy and longevity, but consumers are only likely to consider changing to solid-state illumination if the emitted light is at least as visually pleasing as the older technology’s.

Significant investment by LED makers in the phosphors for white LEDs has resulted in CRIs for their products reaching 80 or more. RGB white LEDs lag, but engineers are currently assessing whether the current test-color method for calculating CRI, which was developed before white LEDs became a viable alternative for lighting, truly reflects the color-rendering properties of these modern devices. (See theTechZone article “Color Rendering of Light Sources.”)