With the average new vehicle containing 50 to 100 or more electronic control units (ECUs)—requiring as much as a mile of wire to connect them over several different networks—it’s no wonder that semiconductor firms are competing fiercely for a place in your car. 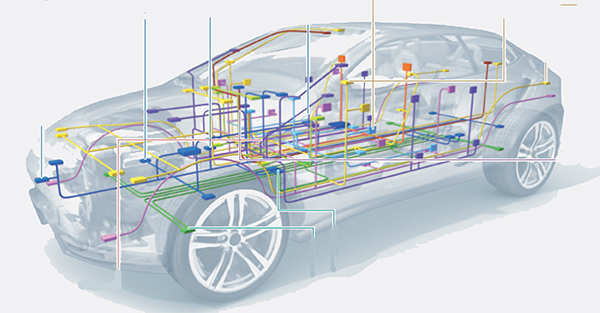 In addition to technical complexity there are serious technical and regulatory barriers to entry. There are scores of separate Society of Automotive Engineers (SAE) standards for electronics involved in engine control, driver assistance, drive train monitoring, passenger comfort, infotainment, and more. Any MCU that is “automotive qualified” is guaranteed to meet some pretty high standards, after which the choice depends primarily on the application.

Getting the MOST out of vehicle networking

Just as the poet observed that “no man is an island,” neither is there an isolated MCU in a car; all are part of one network or another, depending on their function. The primary networks are CAN, LIN, FlexRay, MOST, and Ethernet AVB (Figure 1).

The Controller Area Network (CAN) is currently the primary automotive network in the cabin, powertrain, chassis, and body systems. 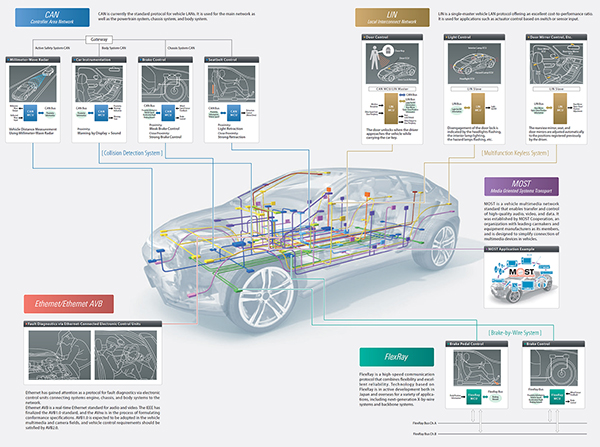 The Local Interconnect network (LIN) is a low-data-rate master/slave network that controls things like remote keyless entry, lighting, mirrors, and doors. Via the LIN network the doors may automatically lock when the car starts moving; an alarm sounds when seatbelts are not fastened or the car is turned off when the lights are still on; or the rearview mirror and seats automatically re-adjust to previous settings depending on who is driving the car.

In contrast to LIN, FlexRay is a high-speed, reliable protocol for next-generation application such as drive-by-wire. FlexRay systems provide greater accuracy in response to proximity alerts, adding the ability to consider acceleration angle to actively steer and brake a car to avoid a pending collision. This can be especially useful when a braking car starts to skid and slide on a rain-slicked street.

The Media Oriented Systems Transport (MOST) networks handle in-car multimedia, routing high-quality video, audio, and data within the vehicle. They are responsible for hands-free phone calls and playing your cell phone music over the car sound system.

Ethernet is too well established and trusted not to have made it into the car, where it generally provides the backbone for polling ECUs in the engine, chassis, and body systems for faults. Ethernet Audio Video Bridging (AVB) competes with MOST to provide high-fidelity digital audio to passengers.

In choosing between MCUs that are qualified for automotive applications, a glance at their datasheets will often reveal for which applications they are best suited. One or more CAN ports are common, as are Ethernet ports; though Ethernet AVB (IEEE 802.1Q) is harder to come by. FlexRay and MOST networks require MCUs that can handle high-speed packet processing; LIN is far simpler. These latter protocols are not often supported directly, though as long as the hardware is sufficiently capable this should not present a problem.

The Renesas V850ES/JG-3H is a low-power 48 MHz 32-bit RISC MCU developed for real-time control applications. The original NEC V850 has a long history in automotive applications, for which Renesas has further refined it. V850ES peripherals include DMA, LVD, PWM, WDT, A/D converter, D/A converter, and DMA, CAN, and USB controllers. The V850ES CPU executes almost all instructions such as address calculation, arithmetic, and logical operations and data transfer in one clock by using a five-stage pipeline. In automotive applications the V850ES targets engine control and antilock braking systems. 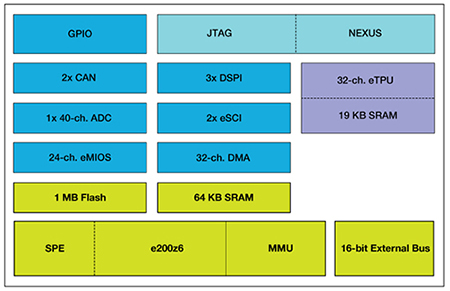 The Microchip MCP2561 and MCP2021A are CAN and LIN transceivers, respectively. The MCP2661 is a high-speed CAN transceiver that serves as an interface between a CAN protocol controller and the physical two-wire CAN bus. The device meets the automotive requirements for high-speed (up to 1 Mb/s), low quiescent current (5 μA typical), electromagnetic compatibility (EMC), and electrostatic discharge (ESD).

The MCP2021A is a LIN transceiver with voltage regulator. The MCP2021A/2A provides a bidirectional, half-duplex communication physical interface to meet the LIN bus specification Revision 2.1 and SAE J2602-2. The device incorporates a voltage regulator with 5 V or 3.3 V 70 mA regulated power supply output.

The Atmel AT90CAN32 is a 16 MHz 8-bit MCU based on the AVR RISC architecture. The chip combines 32 KB of Flash memory, 2K x 8 of RAM, an 8-channel/10-bit A/D converter, a byte-oriented two-wire serial interface, and an ISO 16484-certified CAN controller. By executing most instructions in a single clock cycle the device achieves throughputs approaching 1 MIPS per MHz, balancing power consumption and processing speed. The AT90CAN32 meets the requirements of ISO-TS-16949 Grade 1 for automotive use and is AEC-Q100 qualified.

The STMicroelectronics SPC564A80L7CFAR is a 150 MHz 32-bit MCU designed for automotive powertrain applications. The chip’s superscalar SIMD architecture and support for DSP and floating point instructions enables high-speed data processing and throughput. Serial channels include three eSCI; three DSPI; three FlexCAN with 64 messages each; and one FlexRAY module with up to 10 Mbps with dual single-channel and 128 message objects with ECC.

While the automotive semiconductor market is large and growing fast, getting an MCU qualified to operate in this demanding environment can be a challenging process, with the stringency of the requirements depending on how critical the application will be. After noting that an MCU you are considering is automotive qualified, see if it directly supports the networks to which it will be connected. If not, ensure that it has sufficient speed, communication ability, and I/Os to handle the application you have in mind.

Designers of devices intended for other challenging environments would do well to consider using MCUs that have been qualified for the harsh environmental conditions typical of automotive applications.

For more information on the MCUs discussed in this article, use the links provided to access product pages on the Hotenda website.