Microcontrollers suitable for use in the wearable technology market which have to be small in size and low in power consumption from suppliers including STMicro and Silicon Labs.


The wrist is in great demand, as are many other parts of the body. Even the clothes we wear are becoming part of the next big thing; technology is going (even more) mobile as the concept of wearable technology takes hold. As an emerging sector, it is dependent on a number of technologies but none more so than integrated electronics. Fortunately for developers, embedded electronics is arguably also the most mature aspect of wearable technology, and as such offers many opportunities for OEMs to help shape this new phenomenon.

Wearable technology is expected to include electronics, fabrics, biologics, biochemicals and renewable energy in a way that has never been seen before. It provides an opportunity for immeasurable innovation in a market that will likely be in a state of flux for many decades, as it augments and merges with other aspects of modern life. We are already taking the first tentative steps on a journey that could change modern life forever.

The humble fob watch appeared during the 16th century and remained largely unchanged until the First World War, when it was moved to the wrist predominantly for convenience. This could be considered the first ever example of ‘wearable technology’ and it has endured for an entire century as, fundamentally, a method for keeping time. Of course, since the introduction of integrated electronics the functionality of the watch has changed immensely and so it is logical that it would be the target for some of the first modern examples of wearable devices.

Market analyst IHS Electronics & Media defines this class of device as being worn for extended periods of time, with the user experience being significantly enhanced as a result, while having advanced circuitry, wireless connectivity and independent processing capability. It further defines the categories for wearable technology as being: Fitness and Wellness; Healthcare and Medical; Industrial; Military; and Infotainment. Predominantly, these five categories comprise various forms of the acquisition, processing and displaying of data, which reiterates the need for local processing capability.

Of course, at a more technical level, other key attributes of any device intended to be worn for extended periods during various levels of activity will be size and power; in both cases, the smaller the better. These are requirements that Integrated Device Manufacturers have observed for many years, furthered by Moore’s Law and developments in fabrication and packaging technologies. The challenge now is to combine advanced semiconductor technology with emerging ‘smart’ solutions in fabrics, sensors and energy. Every aspect of wearable technology will rely on the combination of the most optimal point-solutions; luckily there are already a number of microcontrollers available in volumes that effectively target this exciting new sector.

Following the introduction of the Cortex-M0+ core by ARM with lead-partner Freescale Semiconductor, a number of IDMs have adopted the core for their ultra-low-power product offerings. The Cortex-M0+ offers a combination of features and low-power operation that perfectly matches a number of applications, and when delivered in the latest space-saving packages it represents a capable solution for wearable technology.

The Kinetis KL02 from Freescale Semiconductor, for example, is available in a 20-pin WLCSP (wafer level, chip-scale packaging) option that measures less than 2 mm on each side and less than 0.6 mm high. Apart from being the smallest ARM-powered MCU available in volume, the KL02 features nine low-power modes and every device has a unique 80-bit identification number.

Unique features help differentiate devices based on a common processor core such as the Cortex-M0+; illustrating this point, the LPC81XM family from NXP Semiconductor features a Pin Interrupt/Pattern Match Engine (Figure 1) that allows levels present on defined I/O to be assessed using predefined Boolean expressions to generate an interrupt. This could be useful in applications where the processor is required to spend extended periods in a deep-sleep mode, in order to preserve battery power. 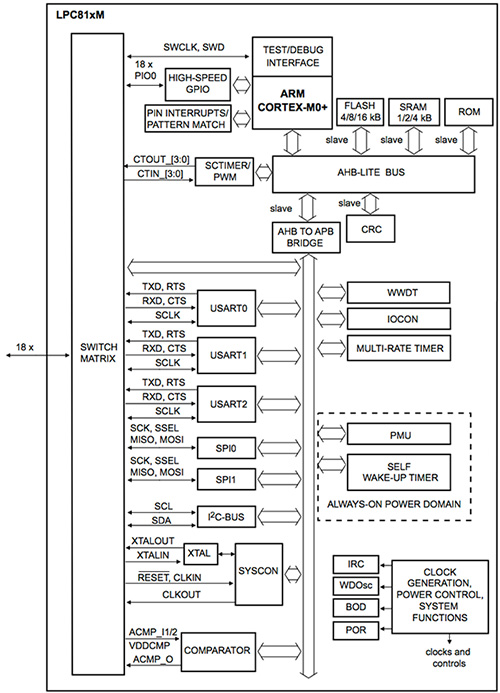 The Zero Gecko family from Silicon Labs integrates a similar but more sophisticated feature with its Peripheral Reflex System; peripherals are able to communicate with each other while the core remains in a low-power sleep mode. The Gecko devices also employ Low Energy Sensor Interface (LESENSE) technology developed to allow the devices to control up to sixteen analog sensors without CPU intervention (Figure 2). It works in the 900 nA deep-sleep mode and can interface to capacitive, inductive and resistive sensors. This could be particularly relevant in wearable technology developed for health monitoring or home care, where sensors will be used to monitor physical conditions over long periods of time. 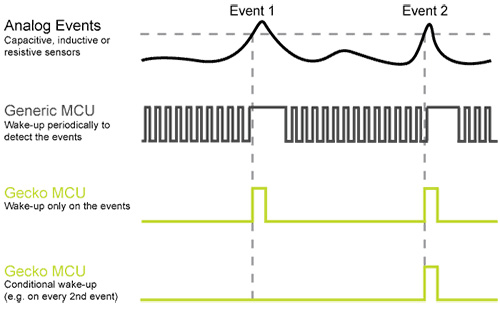 Figure 2: The LESENSE interface in the Gecko Devices from Silicon Labs enable peripherals to interact with analogue peripherals without using the CPU.

As an emerging market, the word ‘typical’ can’t be applied to any wearable technology, however, as it is predominantly intended to be active only when worn, it would be reasonable to expect any device to spend a significant amount of time inactive. However, as any user will appreciate, when a device is needed it is always needed ‘immediately’, so time spent recharging depleted batteries is never welcome. For this reason, ultra-low-power modes will be crucial to ensure the device is always ready to go, and while the Cortex-M0+ core is designed to be low power, it is often down to the IDMs using it to implement the overall low-power strategy. To this end, the STM32L0 series from STMicroelectronics provides a Standby mode that consumes just 0.27 μA when the Real Time Clock is switched off (if the RTC remains on, the power rises to 0.65 μA at 1.8 V). The device takes just 60 μS to wake from Standby mode, although only data held in the Standby registers is retained.

Although only offering two low-power modes, the Cortex-M0+-based ATSAMD20 family from Atmel also implements an intelligent peripheral approach to minimize core activity. The Event System allows peripherals to directly send and receive signals (events) that can be acted upon without waking the core. It operates in both asynchronous and synchronous modes and the Event System provides eight configurable channels comprising up to fifty-nine event ‘generators’ and fourteen event ‘users’ (Figure 3). 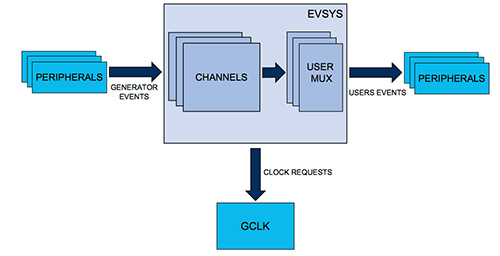 One element of wearable technology that has yet to be comprehensively addressed is providing the (admittedly small) energy the devices will require. Batteries remain the primary solution, but they are relatively large, so it will inevitably become necessary or desirable to power smaller devices with sustainable sources. Here, the concept of energy harvesting is gaining ground rapidly.

Wearable technology is evolving quickly and analysts predict rapid growth with huge potential for innovation. As a result, it is likely to change the way we live forever.