Wearable Technology at Work, for Health and Safety

This article discusses sensors from STM, TI, and Fairchild that enable wearable technology to provide users with information such as location and medical data.


Think wearable technology, and images of a future augmented by devices such as smart glasses, fitness watches, tele-health monitors or color-change clothing may spring to mind. While these innovations are trialed to drive consumer interest in the benefits of wearables in day-to-day life, steady progress is being made in the use of wearable technology in the world of work. Without the need for novelty value, and free of demands to deliver ever-more immersive experiences, various projects involving leading European universities, and with EU funding, have been studying the potential for wearables to improve the effectiveness and safety of workers, and particularly first responders in the emergency services.

Considering the example of a firefighting team, the value of information that communicates the location and vital signs of individual team members to the mission coordinators, and that provides warning of any changes in environmental conditions, can be easily understood. With real-time location information, mission control can keep an overall picture to coordinate the team more effectively.

As far as location information is concerned, a reliable GPS fix may not be possible inside a building. Pedestrian Dead Reckoning (PDR) algorithms are becoming increasingly accurate using the latest tiny precision inertial modules that integrate multiple MEMS sensors to generate a combination of accelerometer, magnetometer and gyroscope readings. A barometric pressure sensor such as the STMicroelectronics LPS331AP may also be used to enhance accuracy by providing altitude sensing enabling the floor level to be detected.

An ecompass module, such as the STMicroelectronics LSM303DTR or Freescale FXOS8700CQ, combines a 3-axis digital linear acceleration sensor and a 3-axis digital magnetic sensor, and is able to provide an accurate compass heading by detecting the direction and magnitude of external magnetic fields and using accelerometer measurements for tilt compensation. Supporting ecompass software available from the device vendor assists design with MEMS ecompass modules, including providing help to implement features such as tilt compensation and magnetic calibration. Freescale’s Xtrinsic Sensor Fusion software provides processor-agnostic source code and includes simulated sensor drivers, enabling developers to run the software immediately on their chosen processor platform. The simulated drivers are simply replaced with real sensor drivers when physical sensors are connected.

In a consumer mobile application, PDR algorithms need to use contextual data from the ecompass, and additional sensors such as a MEMS gyroscope, to prevent unpredictable changes in device orientation from causing inaccuracy in the calculated position. In a professional wearable application, the device orientation will change relatively little during normal use. Instead, contextual data may be used to detect exceptional conditions such as if the wearer has fallen or become trapped and is in need of rescue. ST’s iNEMO family of inertial modules integrate multiple sensors giving up to nine degrees of freedom (9DOF) with 3-axis accelerometer, 3-axis magnetometer and 3-axis gyroscope in a compact 4 mm x 4 mm x 1 mm LGA-24 package.

Demand for a wearable solution

For professional first responders, a wearable solution is ideal, and may be embedded into clothing such as a protective jacket or boots. This gives hands-free convenience and can relieve the operative of the responsibility to actively manage a device in their hands. Integrating technologies such as voice recognition can also help support hands-free operation by enabling voice control of critical system functionality.

A number of projects have been initiated to research and develop wearable technology for emergency services and other industrial applications. Some examples include SINETRA (Smart INtEgraTion for Rescue TeAms), which has EU-level funding and consists of various commercial organizations as participants, as well as research bodies including the Fraunhofer Institute and universities such as the University of Tampere in Finland. Wearit@work is a similar project, founded by the European Commission, to develop wearable computing for improved service and safety in a number of applications such as emergency response, aircraft maintenance, automotive production and healthcare.

Monitoring vital signs such as heart rate or respiration can indicate if a team member is becoming over-stressed and should be instructed to withdraw. Traditionally, heart rate has been measured by attaching electrodes to the body in one or more locations or, in the case of sports heart-rate monitor (HRM), by attaching a chest strap containing a piezoelectric sensor. Neither approach is satisfactory for use by firefighters or other responders, being inconvenient, uncomfortable, and potentially easily dislodged during the mission.

Optical pulse-wave sensors have been developed, which require only skin contact and hence may be integrated into a wristband or earpiece, providing a more easily wearable means of monitoring heart rate. As outlined in Figure 1, the sensor comprises an optical emitter such as an LED and a detector. This may be a photosensor such as the Fairchild QTLP610CPDTR phototransistor, and provides a means of monitoring the wearer’s heart rate by detecting changes in the volume of blood flowing through a blood vessel such as an artery. As the volume of blood peaks with each heartbeat, more of the light from the emitter is absorbed causing a corresponding fall in the response of the phototransistor. In addition to heart rate monitoring, a body-temperature sensor can also be easily integrated into the wristband or earpiece. This can provide additional data to help coordinators identify if a team member is encountering difficulties or should be withdrawn from the operation for safety reasons.

Monitoring the environment inside the building during an operation can further enhance the safety of the team, and can provide valuable information to direct the operation. If dangerous chemicals or the potential for explosion are encountered, a change of tactic or special equipment may be required. An ambient temperature sensor, as well as sensors for gases such as carbon monoxide or flammable gases, may also be integrated into the wearable sensor pack.

Low-power operation is a critical requirement for wearables across a wide range of applications. In the consumer sector, the need to achieve an acceptable battery-recharge interval is a key factor that calls for a focus on low-power design all the way from component selection to software-based power management. In an application such as emergency first-responder wearables, low-power design is predominantly needed to minimize the size and weight of the battery and associated power components. A heavy and bulky battery is difficult to site, and may be cumbersome and tiring for the wearer, ultimately hindering completion of tasks and endangering the mission.

Designers seeking to integrate sensors as part of a low-power lightweight wearable system can look to the portable medical applications sector for helpful solutions to various challenges. Texas Instruments has the AFE4400 single-chip analog front-end module for a pulse oximeter, which integrates all the circuitry needed to connect to an optical pulse oximeter sensor and an SPI port for connecting to an external microcontroller or host processor. The AFE4400 has a low-noise receiver channel featuring a transimpedance amplifier and sigma-delta ADC to capture the signal from the photodiode, and also integrates a current-control DAC and driver to control the LED intensity.

Operating along similar principles as the pulse-wave sensor described earlier, the pulse oximeter is able to measure not only pulse rate but also the blood oxygen level by monitoring the light detected at the phototransistor. The blood oxygen saturation (% SaO2 or % SpO2) is measured by comparing the attenuation of the light at two different wavelengths, taking advantage of the fact that oxygenated haemoglobin and reduced haemoglobin offer significantly different absorption. 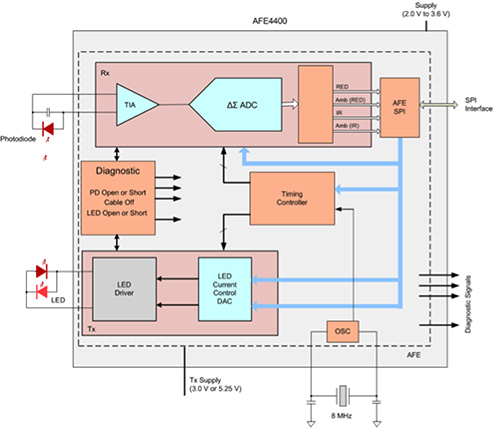 Figure 2: TI’s AFE4400 integrates all the circuitry needed to control a pulse oximeter sensor as part of a wearable heart-rate monitoring application.

As an aid to system development, the AFE4400SPO2EVM evaluation module is available, featuring an AFE4400 IC and MSP430 microcontroller on-board. It has a DB9 connector for a pulse oximeter sensor cable, and includes demonstration software with a GUI for accessing all the AFE4400 registers. Using this evaluation module can help accelerate development of a low-power wearable heart-rate monitoring application.

A large variety of sensors for detecting location, movement, environmental conditions and vital signs such as heart rate and body temperature now offer low power consumption, small size and ease of use, making them suitable for use in wearable devices. A large number of consumer applications are emerging. However, wearable technology has important benefits in professional applications and particularly the emergency services, including improved safety for first responders and the opportunity to gather extra data in real-time to help coordinate teams and ensure a successful conclusion to each mission.