Watch Out for Counterfeit Cables

Counterfeiting goes beyond semiconductors, evidenced by a rise in counterfeit cable incidents in recent years. 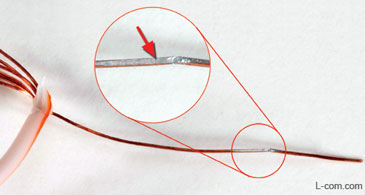 A copper-clad-aluminum (CCA) cable results in higher data loss and low transmission speeds, according to L-com Global Connectivity.It's no secret that semiconductors are the most widely counterfeited parts in the supply chain. A 2012 IHS iSuppli report found that the top five part types counterfeited—analog ICs, microprocessors, memory ICs, programmable logic and transistors—accounted for roughly two-thirds of all counterfeit incidents in 2011.

But these aren't the only components causing major counterfeit headaches for buyers. Any obsolete component or part in short supply is fair game to counterfeiters. This means resistors, capacitors, cables and other passive devices and interconnects aren't immune to counterfeiting.

As an example, L-com Global Connectivity Inc. has reported that the number of counterfeit cable incidents has increased over the past few years, although it has been a major issue in the industry for some time. Dave Gallagher, product manager for enterprise cabling infrastructure at L-Com in Andover, Mass., says the key reason for the uptick is "the rise in commodity materials costs."

"Copper, gold and oil are major contributing costs to cable assemblies and as we all know, it costs more to fill our gas tanks today than it did five years ago. But that is only part of the story," says Gallagher. "The Internet has allowed companies to shop globally for products. Many sources here in the USA are nothing more than a warehouse of an importer. Either way, these potential sources are presented as a blind buy to the end user."

Earlier this year, UL warned of potentially hazardous communications cables, marked on the box as Startech.com and Monoprice, which both bear counterfeit UL Marks for the United States. The communications cables are missing required flame retardant elements, which increase the risk of fire.

"When was the last time you cut up a cable you just purchased to make sure it was built correctly?" asks Gallagher. "Most just plug it in and figure that if the light turns on it must be good. Unfortunately, the reality is often different. It's what you don't see that makes a huge difference in performance."

Gallagher puts part of the blame on buyers because they "are more incentivized to reduce component inventory cost. This is done in two ways; first reduce unneeded stock and secondly reduce the cost per unit. The concept of taking the lowest bid pushes us to the lowest cost provider regardless of product quality." 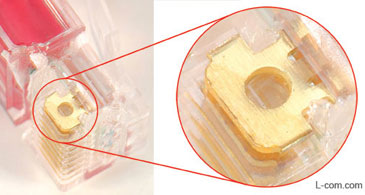 Connectors with 50 microinches of gold do not degrade.

A lack of communication between the purchasing and engineering teams also contributes to the problem.

"In some companies, buyers are deliberately separated from the engineers who design systems," says Gallagher. "This prevents the simple verification of the final product through engineering. It also prevents the buyer from being more directly involved with the folks who actually use the parts. When a problem comes up it might even get handled only through a QC process and the buyer is left out of the loop."

In the end, a bad cable can reduce network performance by 50 percent or more, according to Gallagher. This can be the result of materials substitutes, such as copper-clad- aluminum (CCA) for pure copper or gold flash instead of 50 microinches of gold plating.

Problems arise when the manufacturer or reseller tries to pass CCA cable as pure copper cable and gold flash as gold plating. However, many connector makers agree that the one way to deal with the rising cost of materials, for example, is to use lower gold content, but only if the applications can use, as an example, 15 microinches instead of 30 or 50 microinches of gold plating. Particularly in mil/aero and some telecommunications applications, specifications do not allow for reduced gold plating. 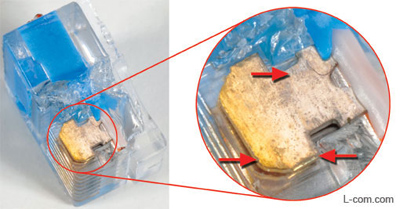 The gold flash on a RJ45 contact has degraded, resulting in poor connections.

So what can buyers do to ensure they receive what they ordered? Gallagher provides four tips to help buyers protect themselves from bad cable buys:

Upshot: Buyers need to make sure they're purchasing from trusted sources.