The amount of semiconductors in vehicles will increase 15 percent to $350 in 2011, as more high-tech electronics safety and communications systems get designed into mid-range car models, according to researcher IC Insights. 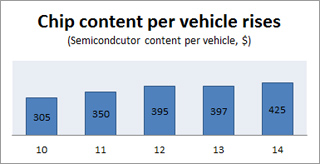 Government mandated safety systems will help boost the amount of chips used in vehicles.The average semiconductor content in vehicles will continue to grow through 2014, when there will be $425 worth of semiconductors in the average vehicle, reported IC Insights.

Driving content are sophisticated communications and entertainment features, safety, and telematics systems, some of which are government mandated. Such systems use a variety of semiconductors including sensors and microcontrollers, among other chips.

Airbags, curtain restraint systems, and tire pressure monitoring systems are required on most new vehicles sold in the U.S., Europe, and Japan. Tire-pressure sensors will be a requirement on all new cars sold in Europe after November 1, 2011. This will increase demand for tire-pressure monitoring systems, as it did when the U.S. instituted the requirement in 2006, according to IC Insights.

Connectivity and onboard telematics will be featured in more cars, appealing to new car buyers who want to smoothly transition content from their portable media devices to their car, home, or office. Center-stack displays that replicate the driver's smartphone screen and onboard charging pads for phones and portable electronics will soon be standard equipment on many new cars.