From blood pressure monitors to weight scales, the quality, reliability and accuracy of sensor output often defines the performance of an end device.


From blood pressure monitors to weight scales, the quality, reliability and accuracy of sensor output often defines the performance of an end device. Even when sensor output is not a critical element of a product’s operation, the current state and status reports they enable provide a valuable snapshot of what a product is doing at a given moment. Status reporting can be very important, for example, in determining position in navigation systems. If a sensor is not giving an accurate report of position or direction, nav device instructions are essentially worthless.

Products that use the best available sensors for the job run efficiently, effectively, and can provide a better end-user experience, helping to assure that an end product performs “as advertised.”

When A.J. Smith, director of product marketing at Honeywell Sensing and Control, was asked about the role of sensors in determining product performance, he said, “For rapidly developing end products, or those that contain new or experimental technologies, sensors often help overcome some of the deficiencies or idiosyncrasies of system design, when some device elements are suboptimal due to lack of time to refine them in the design cycle. Having sensors that are more precise, or gaining additional product or environmental feedback by adding more sensors, can help overcome design gaps, so they are a very good option to achieve rapid development.”

Among other things, sensors can reduce the “unknowns” involved with software algorithms that determine product performance, Smith added, noting that sensors “reduce the complexity involved with creating the best customer experience.”

Honeywell’s Smith further stated that, “The features that promote easy differentiation for a given sensor are dependent on the industry served. When products go through rapid iterations, backward compatibility and modularity of package design might be the best way to differentiate. In an industry where weight and comfort are a concern, size and miniaturization of the sensor might be a key to differentiation.“

Harsh environments are another area where sensors can shine. In this case, quality is determined by the resilience of the sensor. Similarly, when safety is the primary goal, the most reliable sensor is the correct choice. What this really means is that sensor manufacturers must focus on the specific requirements of customers in a market or industry when designing sensors that help the end-product producer differentiate its line-up.

Honeywell’s TruStability pressure sensor (Fig. 1) is an example of a potentially differentiating sensor family. The sensors were developed around two key characteristics – stability of output and a modular platform design. “The stable output allows customers to eliminate cost from their manufacturing and end product because they do not have to build in systems that re-calibrate the product as they have to wither alternative sensors. Sensor output is stable over time and adverse conditions, eliminating this need,” said Smith. 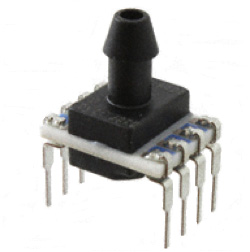 The modular platform aspect of TruStability sensors means they can be quickly placed into a design via a physical implementation that is easy for engineers to work with. An optimized electrical output also speeds the design timeframe and reduces the level of effort needed. Speed to market is a distinct advantage in most industries so having this modular product available gives the design team a real head start.

Mobile communications and automotive are two industries where sensors play a key role in product differentiation. In a typical smartphone, for example, there are 14 or more sensors, many of which make premium functions possible: When a compelling advance takes place in any of the 14, it gives the smartphone manufacturer the ability to tout that enhancement, setting itself apart from the pack.

Today, almost all automotive systems are electronic. The market has mushroomed since engine management sensors first were introduced in the 1960s along with electronic ignition systems and early emission controls, followed rapidly by electronic fuel systems and on-board diagnostics.

Safety became a major focus for automakers based on public demand. Airbag passenger protection and such vehicle stability advances as antilock breaking systems (ABS) emerged. These were followed by driver assistance systems and electronic monitoring for environmental and engine purposes that included such elements as temperature and pressure of air intake, brake fluid pressure, fuel tank pressure, and exhaust gas composition. Automotive sensors needed to work in a particularly demanding and harsh environment with wide temperature swings, vibration levels, and exposure to such elements as salt, detergents, gasoline and other chemicals.

More recently advancements in sensor integration and the introduction of sensor fusion (the combining of sensor data such that the resulting information is in some way better than would be possible using sensor data individually) is driving a new generation of automotive safety systems. For example, when a driver steps on the brakes, the hydraulics engage and the car slows or stops. The act of stepping on the brakes also should cause the cruise control to disengage and the brake lights to go on. Two separate sensors in the past performed this function, so the lights would go on by stepping on the brakes, but the cruise control did not necessarily disengage. Now, reed sensors by MEDER, such as those found in the MK21P-KIT, have solved this challenge. The kits contain three reed sensors in three different sensitivity classes along with one mating actuator magnet in a matching sensor housing.

The EVK2160A Evaluation Kit by Atmel facilitates development of touch and gesture capabilities for use in automotive applications. It is based around the Atmel AT42QT2160-MMU (Fig. 2), which is designed for use with up to 16 keys and a slider. There are three dedicated General Purpose Input/Outputs (GPIOs),which can be used as inputs for mechanical switches etc. or as driven outputs and eight shared General Purpose Outputs (GPOs) (X0...X7) which are driven outputs only. There is PWM control for all GPIO/GPOs. 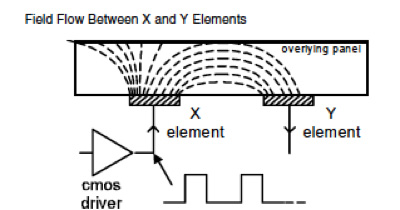 Figure 2: The Atmel AT42QT2160 uses transverse charge-transfer (QT) sensing, a technology that senses changes in electrical charge forced across two electrode elements by a pulse edge. It allows a wide range of key sizes and shapes to be mixed together in a single touch panel.

The underlying QMatrix technology employs transverse charge-transfer sensing electrode designs that can be made very compact and is easily wired. Charge is forced from an emitting electrode into the overlying panel dielectric, and then collected on a receiver electrode. This directs the charge into a sampling capacitor, which is then converted directly to digital form, without the use of amplifiers.