A look at the use of energy harvesting in the design of unmanned aerial vehicles (UAV’s). Using solar cells allows for substantially extended air time.


Unmanned aerial vehicles (UAVs) are increasingly being used for a wide range of applications, from monitoring weather and bush fires to traffic analysis. As the electronics and material technologies improve, there is increasing interest in powering these UAVs from solar energy using banks of solar cells on the wings for both propulsion and sensors. This has already been demonstrated in aircraft that can stay aloft for days at a time, but the challenges of designing to the power budget from the solar cells is key. UAVs are increasingly used for monitoring, and increasing the range of sensors that can be carried by the craft adds to the usability.

One example comes from researchers at the Queensland University of Technology in Australia who are working on a solar-powered unmanned flight system for round-the-clock surveillance. The 2.5 meter wingspan Green Falcon uses the most up-to-date energy-harvesting and sensor technologies with a next-generation warning system complete with remote sensing and visual data capabilities to detect bush fires in Australia, saving lives and millions of dollars in damage. The university is aiming to make the UAV available commercially within the next two years.

The craft weighs 8.8 lbs without a payload and can be launched by hand and is powered by twenty-eight monocrystalline solar cells generating 0.5 W, backed by a maximum power-point tracker, custom energy management system, and a lithium-ion battery. 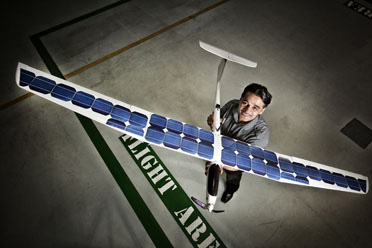 Figure 1: The Green Falcon hand-launched UAV developed at the Queensland University of Technology.

Unlike manned aircraft, the UAV is designed to operate 24 hours a day, so it uses the solar energy during the day and stores the excess in an onboard battery pack to power the aircraft after dark. The craft is fitted with infrared cameras for nighttime search operations to find missing people, relaying the information to emergency services on the ground, and all this needs to be powered from the solar cells and the battery system.

Even though it is small, the researchers are working on swarming capabilities so that several units can communicate with each other directly via wireless links to cover the maximum possible area. Other researchers are working on unmanned UAVs for monitoring traffic with additional sensors. Phastball-0 has been developed at West Virginia University (WVU) in the US to provide high-resolution images that could be used in work-zone management, traffic congestion, safety, and environmental impact studies. Compared to fixed-position ground sensors, airborne sensors offer mobility and measurements from multiple perspectives.

The hand-launched UAV was custom built for remote sensing for highway applications and has a 96 inch wingspan and a takeoff weight of 21 lbs, including 7 lbs of remote-sensing payload. The aircraft is remotely piloted with a 9-channel R/C radio system and is powered with a pair of brushless electric-ducted fans. The use of an electric propulsion system simplifies the flight operations and reduces the amount of vibrations on the on-board sensors.

The UK’s defense research company Qinetiq is working on a larger unmanned UAV called Zephyr. This high-altitude long-endurance (HALE) aircraft has flown for over three days non-stop and is aiming for longer time in the air. Like other UAVs, it is also launched by hand and uses amorphous film solar cells to provide power during the day. At night the power comes from lithium-sulphur batteries. 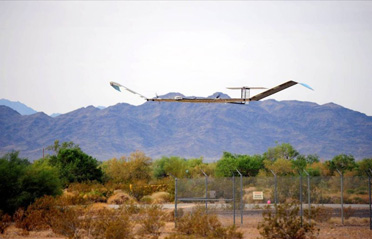 The UK Ministry of Defense has funded the development of Zephyr to date and has partnered with the US Department of Defense (DoD) under their Joint Capability Technology Demonstration (JCTD) program, which is designed to move urgently-needed technologies rapidly into the hands of US forces in the field. The US DoD funded the demonstration flight under the program and this was the first time the two governments have participated in a joint demonstration of a HALE UAV.

The governments see potential applications such as earth observation and communications relay in support of a range of defense, security, and civil requirements.

Titan Aerospace, however, is offering another alternative with its Solara unmanned high-altitude aircraft that is intended to serve as an “atmospheric satellite”. 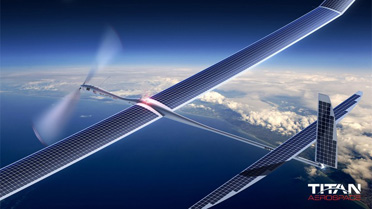 Figure 3: The Solara 50 solar-power UAV from Titan Aerospace aims to stay up in the air for up to five years to act as an aerial mobile phone base station.

The craft is powered by 3000 solar cells across the upper wing, elevator, and horizontal stabilizer to provide up to 7 kW, storing the excess in lithium-ion batteries in the wing. This provides enough power to keep the UAV in the air for up to five years at 65 mph and a cruising altitude of 20 km (65,000 feet). Each aircraft takes off at midnight using battery power and then has all day to re-charge from the solar cells.

Solara 50 uses an autopilot that can fly, takeoff, and land the plane autonomously; and alongside a variety of on-board sensors in the payload, it has high-speed radio links that transmit telemetry data back to the ground station. Titan even sees the aircraft being used to provide cell phone coverage for an area of over 6,500 square miles (16,800 square km), replacing over one-hundred base stations.

Solar cells are vital to the development of these UAVs, and there are three different types: crystal silicon, amorphous silicon, or compound semiconductors.

Unlike crystal silicon, amorphous silicon features irregular atomic arrangements, and the resulting reciprocal action between photons and silicon atoms occurs more frequently, allowing much more light to be absorbed. This means ultra-thin amorphous silicon film of less than 1 µm can be produced and used for power generation. This thin cell, coupled with a lightweight plastic substrate, makes amorphous silicon solar cells, such as Panasonic’s Amorton technology, ideal for producing the energy needed for unmanned UAVs.

Amorton is an integrated amorphous-silicon solar cell, which has been developed by the SANYO division of Panasonic using silane (SiH4) as its source gas and is fabricated using plasma chemical vapor deposition (CVD). The CVD process builds three amorphous silicon layers, p-, i-, and n-layer, on a glass substrate. This p-i-n junction corresponds to the p/n junction of a crystal-silicon solar cell. In the process of this junction formation, a number of cells are connected in series on a substrate at one time. This allows any desired voltage to be obtained. 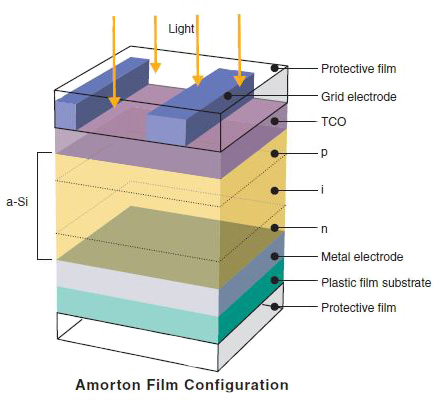 Figure 4: The layer structure of the Amorton solar cell.

This is very different to crystalline silicon where the cells are cut apart and then connected, as it allows multiple cells to be connected in series at the same time as the cells are formed, creating cells with a variety of voltages that can be optimized to the UAV power requirements.

The methods used to form amorphous films have special features that allow other substrates, such as plastic films, to be used in place of the usual glass substrate, creating an energy-harvesting source that is just 0.3 mm thick. 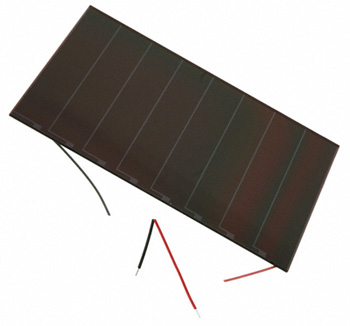 Power management is vital for both the propulsion and sensor systems on the UAV. For the sensors, the eZ430-RF2500-SEH solar energy-harvesting development kit from Texas Instruments helps create a wireless sensor network within a UAV based on the ultra-low-power MSP430 microcontroller. 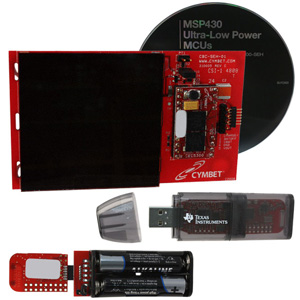 It includes a high-efficiency solar panel (2.25 x 2.25”) that provides enough power to run a wireless sensor application with no additional batteries. The system also manages and stores additional energy in a pair of thin-film rechargeable EnerChips from Cymbet, which are capable of delivering enough power for over 400 transmissions. The EnerChips act as an energy buffer that stores the energy while the application is sleeping and has light available to harvest. The batteries are environmentally friendly and can be recharged thousands of times. They also have a very-low self-discharge, which is vital for a no-power, energy-harvesting system.

The eZ430-RF2500 is used to run the energy-harvesting application. It is a complete USB-based MSP430 wireless development tool and provides all the hardware and software necessary to use the MSP430F2274 microcontroller and CC2500 2.4 GHz wireless transceiver. It includes a USB debugging interface that allows for real-time, in-system debugging and programming for the MSP430, and it is also the interface to transfer data to a PC from the wireless system.

The eZ430-RF2500-SEH sensor monitor is a complete open-source application that includes an example energy-aware project for hardware testing and may be used as a framework for an energy-harvesting project. Firmware is provided for the MSP430, as well as a PC demo application to display the data samples from the network. Managing the power to all the systems in the UAV is vital within the tight budget provided by the solar cells. The bq25504 is the first of a new family of intelligent, integrated, energy-harvesting power management from Texas Instruments that is specifically designed to efficiently acquire and manage the microwatts (μW) to miliwatts (mW) of power generated from a variety of DC sources such as solar cells.

The design of the bq25504 starts with a highly-efficient DC-DC boost converter/charger that requires only microwatts of power to begin operating, and, once started, can effectively extract power from low-voltage output harvesters such as single- or dual-cell solar panels. The boost converter can be started with VIN as low as 330 mV, and once started, can continue to harvest energy down to an input voltage of 80 mV. 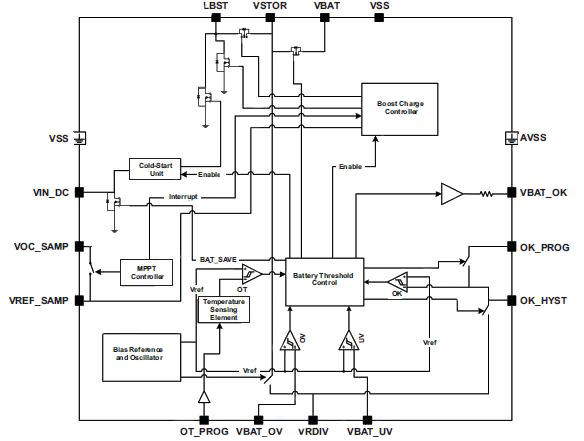 The bq25504 also implements a programmable maximum power-point-tracking sampling network to optimize the transfer of power into the device. Sampling of the VIN_DC open circuit voltage is programmed using external resistors, and held with an external capacitor (CREF).

For solar cells that operate at maximum power point (MPP) of 80% of their open circuit voltage, the resistor divider can be set to 80% of the VIN_DC voltage and the network will control the VIN_DC to operate near that sampled reference voltage. Alternatively, an external reference voltage can be provided by a microcontroller to produce a more complex MPPT algorithm.

The bq25504 was designed with the flexibility to support a variety of energy storage elements and battery technologies used in these UAVs, from the lithium-ion to lithium-sulphur. The storage element makes sure constant power is available when needed for all the systems on board the UAV and also allows the system to handle any peak currents that cannot directly come from the solar cells. 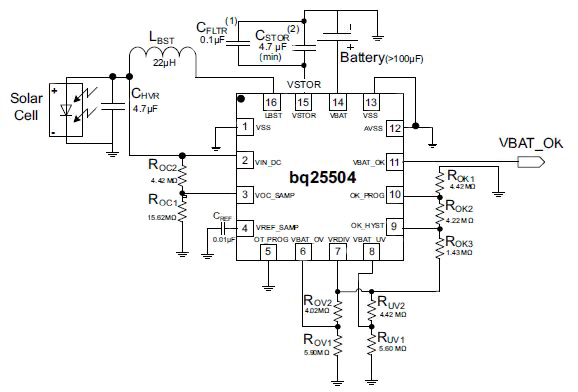 Figure 8: Connecting the bq25504 to a solar cell array to provide power for a sensor network in a solar UAV.

To prevent damage to the batteries and extend the flight time of the UAV, both maximum and minimum voltages are monitored against the user-programmed undervoltage (UV) and overvoltage (OV) levels. To further assist users in the strict management of the energy budget from the cells, the bq25504 toggles the battery-good flag to signal an attached microprocessor when the voltage on an energy storage battery or capacitor has dropped below a pre-set critical level. This should trigger the shedding of load currents to prevent the system from entering an undervoltage condition. The OV, UV, and battery-good thresholds are all programmed independently. The bq25504 is packed into a small footprint, 16-lead, 3 mm x 3 mm QFN package, making it suitable for smaller UAV systems.

Both small and large solar-powered unmanned aerial craft such as UAVs are becoming more interesting for many kinds of monitoring tasks. With initial prototypes staying up in the air for a few hours, the new generation of UAVs is optimizing solar cell technology and power management to spend years in the air in operation, opening up all kinds of new opportunities.

Carefully managing the power of the system extends the battery life and allows the craft to fly for much longer periods, allowing more monitoring of roads and weather, and more search patterns for critical situations. The additional power from optimizing the solar cells and power management also supports more sensor systems such as inertial navigation and infrared cameras to improve the utility of the UAV and improve the business case. The additional power available is also now becoming sufficient to power advanced algorithms for swarming to increase coverage with small aircraft, and even reaching suitable levels for operating cellular base stations.
Supplier
Product Type
Industry
Function