Brushless DC (BLDC) motors are now replacing traditional brushed DC motors due to higher reliability, efficiency, and lower noise. These are popular in almost every field such as consumer electronics, home appliances, and industrial controls. Development of high performance BLDC control systems requires higher accuracy. This is achieved by using closed loop control in a majority of BLDC control systems.

The advantages of BLDC motors over brushed DC motors are: BLDC motors are more efficient than brushed DC motors. For the same input power, a BLDC motor converts more electrical power into mechanical power than a brushed motor because of the absence of friction due to brushes. In a brushed motor design, the brushes are used to change the poles of the electromagnet in order to keep the motor spinning. Due to this lack of brushes, there is nothing to mechanically handle the polarity changes. As a result, an electronic controller is required to continuously switch the phase of the winding which will keep the motor spinning. To do this, the stator windings are energized in a particular sequence as seen in Figure 1. BLDC motors have three phases. With this topology, to move the motor, two phases are driven during each commutation cycle. One phase is driven high (VMotor) and the other is driven low (GND). The remaining phase is left floating. With every commutation step, the motor will move 60 degrees. Upon completion of all cycles, the motor will have moved a complete 360 degrees.

To implement this sequence, it is important to know the rotor position. This is done by using sensors, such as Hall Effect sensors (sensored control), or by sensing back EMF (sensorless control). Hall Effect sensors are embedded in the stator. When the rotor magnetic poles pass near the hall sensors, they supply a high or low signal, indicating that the north or south poles are passing nearby. The position of the rotor is derived from the exact combination of the three hall sensor signals.

Sensored BLDC is introduced in this application note. Three position sensors provide the current position of the rotor. Position sensors toggle each at 180 electrical degrees of electrical rotation. A timing diagram of sensor output and the required motor driving voltage is shown in Figure 1. The optional use of pulse-width modulation (PWM) provides speed or torque control as shown on Phases A, B, and C in Figure 1. The duty cycle of the modulated output control signal (PWM) is varied to change the speed and torque of the motor. 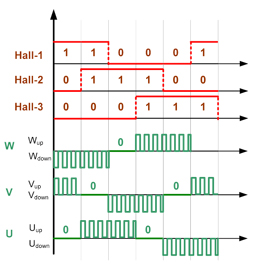 The CY8C3866AXI device is in the PSoC 3 family. A block diagram of the device is shown in Figure 2 with the blocks used in the BLDC application highlighted. 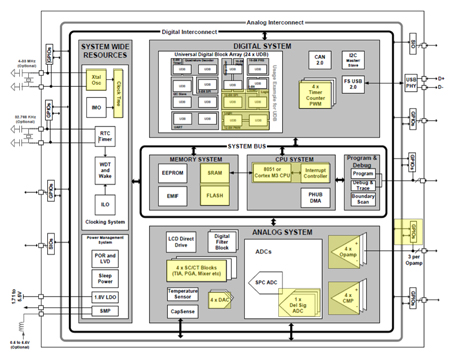 The PSoC 3 digital subsystem provides unique configurability of functions and interconnects. The subsystem connects digital signals from any peripheral to any pin through the digital system interconnect (DSI). It also provides functional flexibility through an array of small, fast, low power universal digital blocks (UDBs) and small blocks targeted to specific fixed functions.

For optimal flexibility, each UDB contains several components: Fixed function timer blocks in PSoC 3 devices are of 16 bits and configurable to act as timers or PWM that play important roles in embedded systems. PSoC 3 provides up to four instances of the Timer block. If additional Timer blocks are required, they are configured in the UDBs. Timer blocks have various clock sources and are connected to the general-purpose input/output (GPIO) though the DSI.

The PSoC 3 analog subsystem provides the device, the second half of its unique configurability. All analog performance is based on a highly accurate absolute voltage reference with less than 0.2 percent error over temperature and voltage. The configurable analog subsystem includes analog muxes, comparators, analog mixers, opamps, voltage references, analog-to-digital converters (ADC), digital-to-analog converters (DAC), and digital filter blocks (DFB). All GPIO pins can route analog signals into and out of the device, using the internal analog bus. This feature enables the device to interface up to 62 discrete analog signals.

The analog system on the CY8C3866AXI device contains: BLDC motor control based on PSoC 3 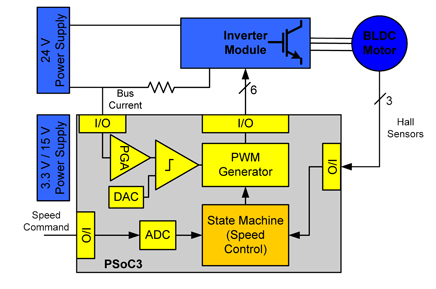 Input control signals to the PSoC 3 are: Outputs from PSoC 3 are power device driver signals. 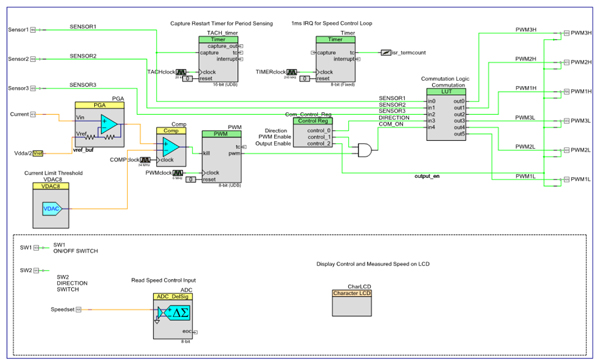 The three Hall Effect sensors are fed into a lookup table (LUT), which is created using the PLD capabilities of the UDB, and uses the data from the sensors to determine the motor position. The LUTs programmed logic will then pass the appropriate PWM signals to the GPIO at the proper time. The GPIO pins are connected to an external power driver module which will directly drive the BLDC motor by gating the high voltage supply. The LUT will also control the direction of the motor and control the starting and stopping of the motor based on what is read by the LUT from Com_Control_Reg. This digital logic will work together to produce the commutation sequence to turn the motor as seen in Figure 1.

Speed control is accomplished by reading a potentiometer from an analog input pin with the DelSig ADC. Every time isr_termcount triggers, the firmware will check the ADC and see if any changes to the motor speed are required based on the voltage measured. The current speed of the motor is measured with TACH_timer, which is a 16-bit timer. Once a falling edge of Sensor 1 occurs, we know that the motor has made a complete revolution. This rising edge will trigger a capture on the timer and move the current timer value to a register which we can then read and determine the current motor speed. The calculated motor speed will then be fed into a control loop to compare the measured and expected motor speed. Based on this calculation, the duty cycle of the PWM may be adjusted to more accurately match the desired motor speed.

This design also implements hardware based over current protection which is explained in greater detail in the next section. The comparator output of the over current detection system is tied directly to the PWM kill signal. When over current triggers, the PWM output is killed which will stop all control signals to the external driver module. This will occur regardless of the current CPU process or state.

This is implemented in hardware on the PSoC 3. The block diagram is shown in Figure 5.

Motor current is measured with a shunt resistor in the ground path of the power inverter module (R1 in Figure 5). This voltage is level shifted on the board and connected to an analog input pin on PSoC 3 (labeled CURRENT).

This input voltage is fed into a PGA implemented with an analog continuous time block. The PGA multiplies the difference between the input voltage and reference voltage (a buffered voltage at half the analog supply, VDDA) and connects the output to a clocked comparator. The voltage level is compared to the current limit. The current limit value is set in a register and converted to an analog voltage with an 8-bit voltage DAC. The output of the comparator is connected to the PWM block and kills the PWM output when the current limit threshold is exceeded. This provides cycle-by-cycle current limiting to the BLDC motor. The implementation of the over current protection in PSoC Creator is shown in Figure 6.

The over current protection mechanism implemented in PSoC 3 hardware is an on-chip low cost solution.

The control increment is output, which is added to the current control input. This drives the PWM to adjust the speed of the motor. MCU implementation also becomes easier with the incremental speed control.

There is one main loop and one interrupt service routine, the Timer ISR. The Timer ISR generates an interrupt every 1 ms and triggers the speed control function. A flowchart of the firmware operation is shown in Figure 8. 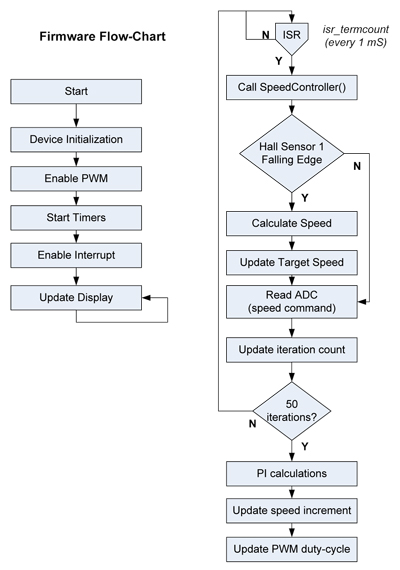 The ADC samples the speed setting voltage (on analog pin SPEEDSET). If the setting has changed, it steps the speed command by one value towards the new target for noise filtering. Every fifty iterations through the speed control loop (50 ms), the difference between the measured speed and the speed command is used to calculate the step adjustment to the PWM duty cycle using Equation 4. The step based adjustments to the PWM, measured speed, and speed setting dampen the instantaneous changes and produce smooth transitions in speed in response to changes in setting or rotation.