Use Wireless Power to Improve Convenience for Wearables


The wearable device is fast emerging as an important market sector for electronics. A key requirement of these devices is convenience, not just in the ability to access data on the move but to ensure that it has enough battery life to last an entire day, and do so every day.

If a user has to plug a device in to recharge it overnight, there is a high probability they will forget on some occasions and wake up to find the product is unable to remain active for the rest of the day. Wireless charging offers a more convenient way of charging electronic devices. Instead of having to plug a mini-USB or similar cable into the device, it can be placed on a charging mat that the user can keep in an easily accessible location. If the wireless-charging system is designed appropriately, multiple devices can be charged on the same mat, reducing duplication and making it easier for users to take the device and charger when they travel.

Wearables are not the only types of electronic device that can benefit from wireless charging. The technology is already widely used for electric toothbrushes and is even being scaled up to recharge the batteries in electric vehicles.

Inductive charging works on the same basis as a power transformer. An induction coil in the mat creates an alternating electromagnetic field that is picked up by a secondary coil in the device to be charged where it is converted back to a usable electrical current. Like a conventional transformer, basic inductive charging requires close proximity between the coils to provide high efficiency. Otherwise, substantial losses can build up through resistance in the primary coil.

The efficiency of energy transfer over longer distances can be improved through the use of resonant inductive coupling using two coils that are tuned through the combination of inductance and capacitance loading to resonate at the same frequency. This resonance allows significant power to be transmitted from one coil to the other over distances of up to a few times the diameter of the coil. 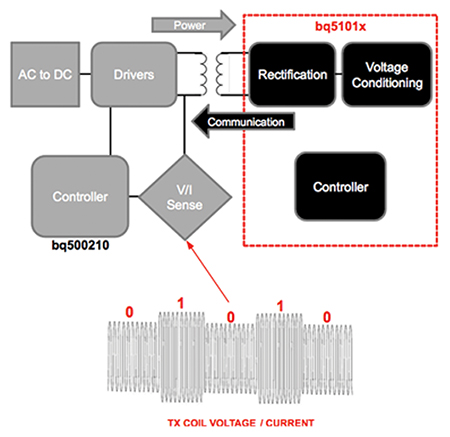 Figure 1: Load modulation is used to encode data that crosses the transformer coupling.

The Q of the coil circuit can be tuned to be high so that a relatively intense field is built up over multiple cycles. The power in this oscillating signal is higher than that being fed into the coil at any one time. As the secondary coil can receive a fraction of this oscillating field and convert it, the amount of power delivered is higher than with a conventional transformer. The use of capacitance turned for resonance cancels out stray inductance and magnetizing inductance in the transmitter, reducing the losses primarily to the winding resistances of the coils, which are generally between 10 and 100 times lower than the inductance-related losses.

To provide higher Q than a conventional transformer, the coils frequently employ a solenoid design, which also helps minimize the skin effect. Dielectric losses are typically minimized through the use of low-permittivity insulators, or just air.

In practice, the coils are not always tuned to a precise resonance frequency. Loosely coupled systems can transfer power as long as the secondary intersects a reasonable number of field lines. Tighter coupling by matching the coils more precisely can deliver greater power but it is not possible to keep tightly coupled coils that are designed to work together in resonance at the same time. These circuits can be designed to operate just off-resonance, where the resonant frequency of the receiver is slightly different to that of the transmitter.

Unfortunately, tightly coupled coils are also sensitive to misalignment, which is a problem for consumer applications where the user simply wants to place the device on a mat without having to check the best orientation and position for successful recharging. So, the transmitter used for charging may employ multiple coils. This increases the complexity of the design but provides greater freedom for positioning. The coils do not need to overlap, which simplifies assembly during production, although overlapping coils provide greater density and therefore more freedom in receiver placement.

To address the problem of letting a single transmitter charge different devices, standards are needed. There are two main standards in use today. The Powermat system promoted by the Alliance for Wireless Power is designed around a loosely coupled system based on a single transmitter coil. The Wireless Power Consortium’s Qi system allows for a number of different configurations, including both loosely and tightly coupled operation. Most existing transmitters use a multi-coil, tightly coupled configuration.

The standards also take care of energy management, to ensure that the charging mat is not activated if there is nothing to charge. For example, the Qi system used a communications protocol to relay signals across the coils to check for the presence of a device and that it is Qi compatible. The standard allows the transmitter to vary switching frequency across the coil between 110 kHz to 205 kHz as the primary mechanism for controlling power delivery.

The Qi uses simple load modulation of the coils’ voltage to send data to the unit on the other side of the air gap. Communication from the secondary coil uses a differential bi-phase bit-encoding scheme operating from a fixed frequency of 2 kHz, with a start bit added before each 8-bit transmission. The transmission is followed by parity and stop bits.

There are a number of control packets that can be sent. The most commonly used packet types are: signal strength; control error; end power request; and rectified power level. Signal strength is used to help align the device on the charging mat that, when used with a visual or audible signal, provides guidance for the user to move the unit around the mat until the signal is good enough to indicate good power transfer.

The control-error packet indicates the degree of error between the input voltage seen by the receiving coil and what it requires. The transmitter typically uses a control loop to adjust the voltage supplied to its coil. If the error is large, the frequency of the error packets is set to a higher amount. A packet will be sent every 32 ms until the error is reduced to within a threshold. From that point, the packets are sent every 250 ms. The control-error packet is useful for tuning power delivery. At light loads, the receiver may request a higher voltage to be able to cope with a current transient – if the wearable device wakes from sleep, for example. At higher load currents, the portable device may request a lower voltage to avoid power losses across an LDO regulator.

When the device is fully charged or senses an internal fault that might damage the battery, it sends an end-power request. Power delivery is also controlled by the rectified-power message. This relays the amount of power that the wearable device receives at the output of its rectifier circuit. The transmitter uses this information to determine coupling efficiency and also work out whether the receiver is reaching its maximum power limit. Sent every 350 ms to 1800 ms, the transmitter uses the absence of the packet to determine whether the device has been removed from the mat. The rectified-power message also helps with foreign-object detection.

Chipsets to support the Qi protocol and control power delivery have been introduced. One example is the Toshiba TB6865AFG for transmitters. This high-integration part includes an ARM Cortex-M3 processor to run custom code and PWM controller to support an external H-bridge circuit for power delivery. The controller can control power for up to two devices and supports foreign object detection according to the Qi standard specifications.

The bq51013 from Texas Instruments is designed for the secondary side, providing AC/DC power conversion and regulation together with the digital control needed to send commands to the transmitter. Members of the overall bq5101x family employ a low-resistance synchronous rectifier, LDO and voltage and current-loop controllers.

As well as controllers, manufacturers offer readymade coils that support the Qi protocol, designed to function as transmitter, receiver or both. For example, the AWCCA-50N50 series from Abracon supports both transmitter and receiver applications. The coil has a diameter of just under 50 mm with a high-permeability shield to protect the electronics within the device. The designs provide a choice of Q factors: either in the range of 70 or 160, offering DC resistance of around 20 mΩ or 70 mΩ, respectively.

For smaller wearable devices, TDK has the WR303050 coil, which reduces coil package size to 30 x 30 mm with a thickness of just 1 mm. DC resistance is 0.41 Ω at room temperature.

The Vishay Dale IWAS-3827 provides receivers with the option of a rectangular rather than square footprint for design flexibility, measuring 38 mm on its long side and 27 mm on the short side. Thickness is 1 mm and the coil offers a DC resistance of 0.18 Ω with a typical Q of 30. 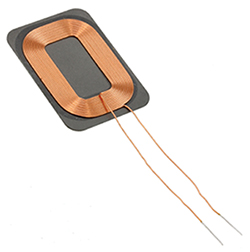 To provide a more integrated solution, TDK’s TMx-66-2M7 and TMx-58-2M7 can be packaged with a TI receiver chip, for a total length of 66 mm and a thickness of just 1 mm.

As the ecosystem around protocols such as Qi expands, we can expect more integrated solutions to appear to ease the job of designing an easier method for charging into wearable devices.