Distributed power architectures (DPA) are popular in modern telecom and datacom equipment, as well as in datacenter servers.


Distributed power architectures (DPA) are popular in modern telecom and datacom equipment, as well as in datacenter servers. The DPA topology traditionally uses a front-end AC/DC converter module that generates a high-voltage DC output from the AC mains. Designers generally prefer an intermediate bus architecture (IBA) because of the challenge of efficiently converting the front-end high DC voltage (normally 48 V) to a low voltage needed at the point-of-load (POL) to power electronic loads on a system board. The IBA-based power system converts the front-end high-voltage input bus to an intermediate level voltage, such as 9 or 12 VDC and lower, using an isolated DC/DC converter module referred to as the intermediate bus converter (IBC) or simply bus converter (Figure 1).

The lower intermediate bus voltage makes it easy for system designers to use very efficient, high-density, nonisolated POLs (niPOLs) to further drive microprocessors, memory modules, and other electronic devices on the system boards. Over the years, the bus converter modules used in such IBA schemes have evolved tremendously. These converters now are available in a variety of industry-standard formats – such as open-frame, bricks, and surface-mountable modules – for upgrading the current IBA schemes implemented on system boards. While the majority of bus converter outputs are semi-regulated, some also offer fully regulated outputs.

Depending on the space and power requirements, Vicor offers two types of bus converters, namely IBCs and bus converter modules, or BCMs, which are both fixed-ratio and isolated DC/DC converters. Both types employ sine amplitude converter topology with zero-voltage switching (ZVS) architecture to realize high efficiency and density along with flexibility. While IBCs are rated for output power over 300 W, the BCMs deliver below 300 W.

To ease the task of selecting the most appropriate intermediate converter module for the end system, Vicor has readied a new DC/DC selection tool, which is part of the company’s online PowerBench design center (see the TechZone article “Design Tool Helps You Select the Right DC/DC Module for Your Application” ). A useful feature of this design center is a simulator. That means, an engineer can interactively model the electrical and thermal performance of the DC/DC converter in application-specific operating conditions and thermal environments before committing to the selected product. Currently, however, the simulator is available only for fixed ratio IBC series parts; efforts are underway to include BCMs in the near future.

Speaking of Vicor’s IBCs,¹ the brick version VI BRICK delivers peak efficiency of 98 percent in an open frame style to facilitate airflow above and below the module to minimize the temperature rise of downstream components. In fact, the manufacturer now gives the option of attaching a quarter-brick IBC to a heat sink or a cold plate for thermal management. Also, Vicor’s quarter-brick and eighth-brick IBCs are pin compatible with industry standards. Eighth-brick power rating is up to 500 W from 36 VDC input and up to 850 W for quarter brick from 55 to 60 VDC input.

The company has added low-profile members measuring 2.30 x 1.45 x 0.42 inches to the IBC050 series, which are available as quarter-brick drop-in upgrades for industry-standard, 5:1 and 4:1 fixed ratio converters. The series provides output power ranging from 600 to 850 W to yield maximum usable power in thermally constrained systems, while freeing up valuable board space for high-value components.

For example, the IB050Q096T70N1-00 quarter-brick IBC can provide up to 750 W of output power and serve as a drop-in upgrade for industry-standard 5:1 fixed-ratio converters. It operates from a 36 to 60 VDC input voltage range, with 9.6 VDC output and 2,250 VDC isolation from input to output. Rated at up to 70 A output current (max), it offers 98 percent peak efficiency. The quarter bricks allow designers to conserve valuable board space and achieve full-load operation at 50°C with 400 LFM airflow.

Similarly, Vicor’s eighth-brick IBC converters deliver power levels up to 500 W and can replace competitive quarter-bricks in the market for space constrained systems. IB048E120T40N1-00 in an eighth-brick footprint (Figure 2) is one such bus converter that is rated for up to 500 W from 50 to 55 VDC input. The output is 12 VDC with 1,500 VDC isolation. Thanks to 1 MHz bandwidth operation, the IBCs cut transient response time by a factor of 10, eliminating the need for bulk capacitors across the intermediate bus to save additional space. 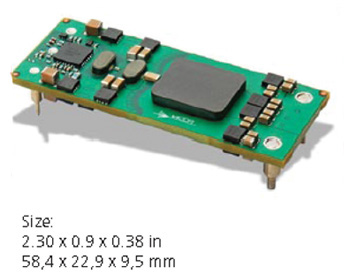 For applications that require bus converters below 300 W, Vicor has readied surface-mountable products labeled V•I Chip BCM. With 1,000 W/in³ power density and more than 96 percent peak efficiency, BCMs (Figure 3) offer significant benefits when used as bus converters. Plus, they are an order of magnitude quieter and faster than hard switching IBCs. Both, full- and half-chip BCMs are compatible, with standard pick-and-place and surface-mount assembly process. 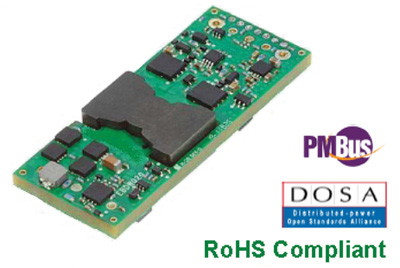 Two newly added wide range quarter bricks are the QBDW033 and QBVW033. The QBDW033A0B operates from an input voltage range of 36 to 75 VDC and provides up to 33 A output current at output voltages from 8.1 to 12 VDC, and 400 W output power in a DOSA-compliant, standard quarter brick. The converter incorporates digital control, synchronous rectification technology, a fully regulated control topology, and innovative packaging techniques to achieve efficiency exceeding 96 percent peak at 12 VDC output. GE’s QBVW033 is an analog version.

Other suppliers improving bus converter modules include Power-One and Texas Instruments. Power-One’s high-performance 20 A SQE48T20120 bus converter provides high-efficiency single output in an eighth-brick package with industry-standard quarter-brick pinout for easy upgrade. It is specifically designed for operation in systems that have limited airflow and increased ambient temperatures.