LEDs have a well-deserved reputation for high-efficiency operation, not to mention high reliability. Properly specified and implemented, LEDs should and do satisfy virtually every lighting application.


LEDs have a well-deserved reputation for high-efficiency operation, not to mention high reliability. Properly specified and implemented, LEDs should and do satisfy virtually every lighting application. Still, there are times when actual device lifetimes fall short of the specified ideal. LEDs are wide-bandgap semiconductor devices. As a result, they have far more complex and varied failure modes than the incumbent technologies. Unlike an incandescent lamp, where failure is fairly simple (the bulb produces light until the filament breaks), with an LED, the failure modes range from mechanical and electrical to material.

First, a quick review of the basics

At the chip level, an LED consists of semiconductor materials doped to form a p-n junction. Biasing the junction with a forward current pushes electrons from the n-type conduction band to the p-type conduction band. In a large percentage of cases, this recombination is a radiative process that generates a photon whose wavelength is defined by the bandgap of the material.

Once a wafer of LEDs has been patterned, it is diced and the individual die are connected and packaged. In order to generate the forward current required to get light out of the LED, it must be connected to the leads with ultrathin wires, typically gold (Figure 1). The die may be bonded in place with silver paste, which provides both electrical and thermal conduction. Another option is to apply a viscoelastic damping material for protection. The vast majority of LEDs are then encapsulated in an epoxy resin which provides mechanical stability, optical diffusion, and a certain amount of environmental protection. 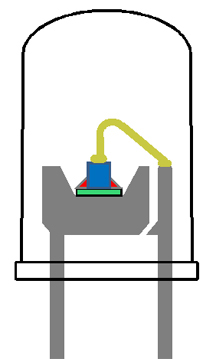 Figure 1: The wire bonds (gold) that connect the LED die (blue) to the leads can be fractured by the stresses of thermal expansion. Moisture or caustic chemicals absorbed by the epoxy envelope can corrode the leads (gray).

LEDs have two primary classes of failure: gradual and catastrophic. With rare exceptions, LED failure tends to be rooted in gradual degradation rather than catastrophic change. Vendors don't define failure as a binary condition but rather as a designated point in a continuum. According to studies, the output of a lamp can degrade as much as 30 percent in luminous flux before the human eye can detect the change. Accordingly, most manufacturers define the lifecycle of a device by the time at which its output luminous flux drops below 70 percent of the initial value.

That isn't to say that catastrophic failure never happens. In fact, the more extreme the operating conditions, the greater the likelihood that your devices may experience failure at some point. There are, however, ways to mitigate many of the causes to ensure the success of your application.

The quality of the material in an LED has a direct impact on its performance and lifetime. The larger the number of defects in the material, the greater the likelihood that electron-hole recombination will give rise to nonradiative decay. Gallium nitride LEDs, which form the basis of most white-light LEDs, are currently grown primarily on sapphire substrates coated with a layer of GaN. Lattice mismatch between the two materials introduces strain that causes a type of defect known as a threading dislocation. These are fine cracks that propagate vertically from the GaN film into the active region, causing nonradiative decay. The greater the percentage of nonradiative decay, the lower the output of the lamp. These defects can propagate, especially if the material undergoes thermal cycling.

Structural defects introduced a different kind of loss by creating paths for leakage current, opening the way for reverse-bias current flow. This injection of carriers through the active region can generate new defects or cause existing defects to propagate. The resultant defect density reduces breakdown voltage which can impair performance.

Similarly, high current can create defects, especially on the p-side of the junction. Indeed, in tests of ultraviolet LEDs, electrical stress degraded performance more than thermal stress. If you have an ultra-high-brightness application, consider a product such as the W724C0-D cool-white LED from Seoul Semiconductor. The surface mount device can tolerate a forward current of as much as 2.8 A for an output of 900 lm (Figure 2). 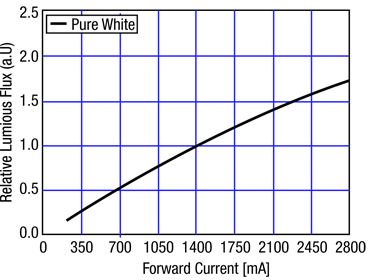 Figure 2: Driving an LED excessively hard can introduce defects that ultimately compromise output and lifetime. For high brightness applications, ensure that you specify a device that can do the job, like this cool-white LED that can generate up to 900 lm of output when driven at 2.8 A. (Courtesy of Seoul Semiconductor.)

The active media is not the only potential source of fault in LEDs. Epoxy encapsulate is designed to protect the die, but it can actually create problems of its own. The material is inherently absorptive, which means that in humidity or even corrosive environments, it can transfer moisture or caustic chemicals to the die. This can cause the contacts to corrode, leading to shorts or voltage spikes. Although passivation can help mitigate this effect, it is important to try to protect devices if they are being used in hot, humid conditions.

In the presence of an electrical field, metals such as the silver in the paste used to adhere a surface-mount LED to the board may spontaneously form filaments in a phenomenon known as electromigration, a spontaneous process exacerbated by humidity or wet conditions. For LEDs that are not encapsulated, and they do exist, this can be a problem that should be guarded against.

LEDs exposed to a high voltage electrostatic discharge run the risk of catastrophic failure. Unfortunately, ultra-high-voltage spikes do not represent an unusual condition. Depending on the humidity and your shoes, you could accumulate an electrostatic charge of as much as 1.5 kV by walking through a carpeted room. When applied to a die, that kind of shock can overcome the electrostatic resistance of the material semiconductor material. The discharge takes the form of extreme localized heating, which can create perforations in the active media, leading to a short-circuit failure.

A transient-voltage-suppression diode (TVS) with a breakdown voltage of around 50 V, such as the 5KP series from Littelfuse, can help protect the device. The diode can tolerate a 5,000-W peak pulse with a response time better than 1 ps.

The wire bonds that connect to the die can be very fragile. The epoxy resin encapsulation generally protects devices from shock and vibration. That said, the packaged LED incorporates a number of different materials—conductors, insulators, semiconductors, nearly all with different coefficients of thermal expansion. As a result, temperature swings can introduce variations in material expansion, leading to mechanical stress that can fracture the wires or otherwise compromise the contact, typically causing catastrophic failure in the form of an open circuit. Stabilizing the device from thermal extremes and rapid thermal cycling using good heat management practices is essential. Consider conductive or even active cooling to address the issue. If heat promises to be a problem, take care to seek out components rated for temperature extremes.

Open circuits can be a problem, particularly for LEDs wired in series with other components. If one device goes open circuit, it can take the whole string with it. The LSP0900BJR-S shunt protector from Bourns can tolerate a breakover current Ibo of 75 mA and a breakover voltage Vbo of 33 V. The RoHS-compliant device provides protection against an LED that has failed open circuit, allowing the current bypass the fault and continue to the rest of the string. If you're working with a high-reliability application, it's a good approach to ensure performance.

The foregoing represents a jumping off point for your discussions with your vendor. Other failure modes for LEDs exist, of course, including thermal degradation, which has been covered previously in a TechZone Lighting article Overall, probably the most important thing you can do is to be clear on the requirements for your application and the trade-offs you are willing to make, and then work with your vendor to find a product that fits your specifications. Properly chosen and integrated, LEDs can provide robust, high-efficiency sources for a wide range of products.