Twelve-inch Wafers are Not Just for High-End Chips Anymore

Production of semiconductors on twelve-inch wafers will double as more products are built on the larger wafers. 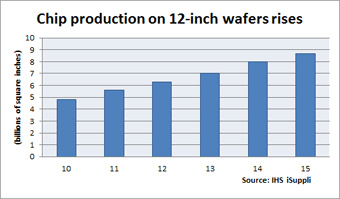 The transition to larger wafers should be good news for semiconductor buyers. Suppliers get more usable chips per wafer on twelve-inch wafers than eight-inch, which should increase supply.

However, while there will be greater use of twelve-inch wafers over the next four years, some chip suppliers are discussing transitioning to eighteen-inch wafers.

From a wafer manufacturer’s perspective, the transition to eighteen-inch represents the most logical approach to achieve the cost reductions necessary to stay on track with Moore’s Law, according to IHS iSuppli. Moore’s Law stipulates that the number of transistors that can be placed inexpensively on an integrated circuit doubles every two years.

There are serious questions concerning the benefits and costs of adopting the next-generation larger wafer size. For instance, it is uncertain whether semiconductor manufacturers, tool suppliers, and silicon suppliers can profit from eighteen-inch wafers, said Jelinek.

IHS iSuppli reported that the transition to eighteen-inch wafers will begin in 2015. Several industry leaders are building facilities in preparation of alpha tool installation.