A leading automaker steps into the re-shoring ring by repurposing a U.S. plant and committing to make more cars on American soil. Will others follow? 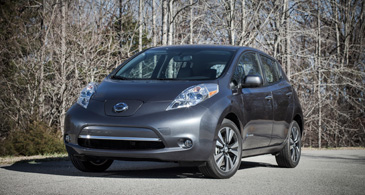 Billed by the manufacturer as the "largest lithium-ion automotive battery plant in the U.S.” the facility could foreshadow a new trend for Nissan, which up until this year handled all of its Leaf production in Japan. The facility is one of three of its kind in the world operated by a major automaker.

"Opening this U.S. plant is an important milestone in Nissan's overarching strategy to foster sustainable mobility around the world," said Carlos Ghosn, Nissan’s president and CEO, in a press release.

"Nissan is the zero-emissions vehicle leader, and we are making significant strides as one of the largest producers of electric vehicles and batteries in the United States,” Ghosn continued. “The opening of this facility in Tennessee supports our goal of making zero-emissions mobility a reality through American jobs and American manufacturing."

Nissan’s re-shoring efforts (aka, the return of previously offshored manufacturing activities to American soil) go beyond LEAF production. According to the company, by 2015 it aims to have 85 percent of all Nissan and Infiniti products that are sold in the United States produced in North America. These efforts are part of a larger trend and represent a significant reversal over the early-2000s, when the U.S. trade deficit with China alone cost U.S. manufacturing over 2.8 million jobs between 2001 and 2010, according to the Alliance for American Manufacturing.

Bringing the jobs back

In a 2012 report, U.S. Manufacturing Nears the Tipping Point: Which Industries, Why, and How Much, Boston Consulting Group explored the idea of re-shoring. BCG credits improved U.S. competitiveness and rising costs in China as the key drivers of the trend, which it expects to add 2 million to 3 million jobs and about $100 billion in output across a range of industries. Businesses that are leading the charge include transportation goods, appliances and electrical equipment, furniture, plastic and rubber products, machinery, fabricated metal products, and computers and electronics.

BCG also predicts that by around 2015 — when higher U.S. worker productivity, supply chain and logistical advantages, and other factors are taken fully into account — it may start to be more economical to manufacture many goods in the United States.

“An American manufacturing renaissance could result,” BCG concluded. “Companies that continue to treat China as the default low-cost option for supplying U.S. markets on the basis of wage rates alone could soon find themselves at a competitive disadvantage.”

Jason E. Piatt, president at electronic controls designer and manufacturer Praestar Technology Corp. in Waynesboro, Pa., says the automotive sector may be ripe for re-shoring due to the reliability and safety issues that surround the industry. Growth in unmeasured costs and overhead (including travel to and from foreign plants) could also push manufacturers to rethink their existing offshoring strategies.

“Automakers can gain real value by having production nearby,” says Piatt, “versus thousands of miles away overseas.”

But re-shoring can pose challenges for firms that moved operations to foreign countries before words like “ObamaCare” even existed. Beginning in 2014, for example, companies with 50 or more employees will either have to sponsor a health plan for 100 percent of their workers or pay $750 per worker in penalties to the federal government.

“The new regulations may take re-shoring off the table for some manufacturers that choose to outsource or offshore some or all of their operations in order to keep headcount below the threshold,” Piatt says.

Paul Blom, executive vice president and COO at global electronics manufacturing services provider SMT Corporation in Ontario, says product lifecycles could also stem the re-shoring flow as companies wait out their current cycles—some of which could be as long as three years or more—before shifting production to American soil.

“Some firms may wait to come out with their next generation of product,” Blom explains, “and then launch that new generation onshore while letting the prior [versions] fade out offshore.”

From his vantage point, Blom says the re-shoring trend has legs and will likely continue over the next few years as companies look to the United States, Canada and Mexico when selecting new or replacement sites.

“Given the increasing costs of [manufacturing] in China,” says Blom, “I think we will continue to see more firms moving production to all three countries.”