The use of oxygen and methane gas sensors to detect low to deadly levels of toxic gases in mines. Sensors include Parallax's MQ-2 and Honeywell's KGZ-10.

According to a U.S. Department of Labor Mine Safety and Health Administration (MSHA) report1, mining safety has been dramatically improved. Coal mining fatalities alone, tracked from 1900 through 2014, confirm the claim; in 1900, for example, there were 448,581 miners and 1,489 fatalities, while in 2014 the number of miners totaled approximately 120,000, but there were only 16 fatalities.

Toxic gases are very often released in underground mines and cannot easily be detected by human senses. Gas in mines is naturally produced during the conversion of organics to coal. It is not only in the mine’s atmosphere, but is also absorbed into coal’s inner surfaces. When released during mining, fire and explosion are a potential result.

Carbon monoxide (CO) is an example of a possibly deadly gas that is devoid of color, taste, or smell and can form underground during a mine fire or after a mine explosion, so miners who survived the initial effects of a mine fire or explosion still face the risk of carbon monoxide asphyxia. Today’s coal miners rely on carbon monoxide detectors and monitors to recognize its presence underground. However, before the availability of modern detection devices, miners turned to Mother Nature for assistance. Canaries – and sometimes mice – were used to alert miners to the presence of the poisonous gas. Following a mine fire or explosion, mine rescuers would descend into the mine carrying a canary in a small wooden or metal cage. Any sign of distress from the canary was a clear signal that the conditions underground were unsafe, prompting a hasty return to the surface.

A sudden rise in highly toxic CO, the inherent flammability of methane (CH4), and insufficient oxygen are still a reality in mining. Federal regulations require the use of methane monitors on all mining machines. When blasting is used in the mining process, carbon monoxide occurs in large quantities along with hydrogen sulphide (H2S) and nitrogen dioxide (NO2). The inhalation of an overlooked black damp in mines, which is a mixture of dust, carbon dioxide, and nitrogen, gradually overcomes and destroys the body’s blood system, which may result in chronic diseases as a consequence of exposure to toxic gases.

It isn’t only a specific event, such as an explosion, that causes concern for miner safety. Low levels of toxic gases are harmful when there is chronic exposure.  In order to dilute both low and high toxic-gas levels and make the mine environment safer, ventilation air systems are now installed that ventilate mines at high flow rates. This air is then typically vented to the atmosphere. Concern, however, remains as to the safety of the gas as the ventilation systems dump the methane into the atmosphere, potentially posing an environmental threat.

Two types of sensors, infrared and catalytic heat of combustion, are commonly used for measuring combustible gases such as methane in non-mining applications. Each sensor has its own advantages and constraints; for example, some sensors are better for sensing toxic gases and some are better for combustible gas detection. In underground applications, only heat of combustion sensors are used.

Regulations now exist that govern methane discharge levels, and the regulations necessitate both accuracy and stability often provided by an infrared sensor for CH4 detection. Regulation is likely to become even more stringent going forward.

One sensor used in equipment that detects methane in mines is the Parallax MQ-2 series (Figure 1).  The sensor considers not only the presence of methane, but also the influence of temperature and humidity on its measurement accuracy. In addition to methane detection, these devices are also suitable to detect LPG, i-butane, propane, alcohol, hydrogen, and smoke. 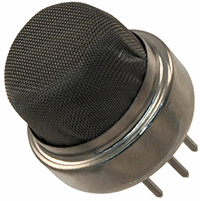 The sensor is made from a small alumina tube, a tin-dioxide sensing layer, and an electrode, while a heater maintains the components at a specific operating temperature compared to the cold ambient air of the mine.

While toxic gases are of greatest concern, the monitoring of oxygen is also critical. Sensors such as the KGZ-10 oxygen sensor series by Honeywell Sensing and Control (Figure 2) provides a highly accurate oxygen reading without the use of additional reference gas requirements—important in a highly combustive environment. 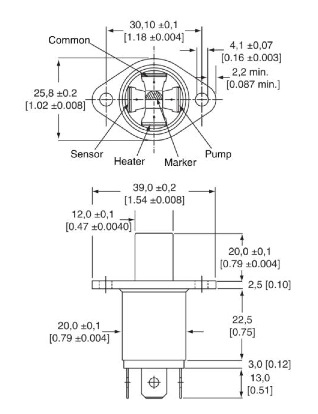 The sensor uses two zirconia-based oxygen (ZrO2) discs separated by a small hermetically-sealed chamber. One disc functions as a reversible oxygen pump, used to successively fill and empty the chamber. The second measures the ratio of the partial pressure difference, generating a corresponding sense voltage.

The Analog Devices EVAL-CN0234-SDPZ (Figure 3) is a single supply, micro-power toxic gas detector using an electromechanical sensor. Electrochemical sensors offer several advantages for instruments that detect or measure the concentration of many toxic gases. Most sensors are gas specific and have usable resolutions under one part per million (ppm) of gas concentration. They operate with very small amounts of current, making them well-suited for portable, battery-powered instruments. Gas detectors are either portable devices or fixed gas detectors. 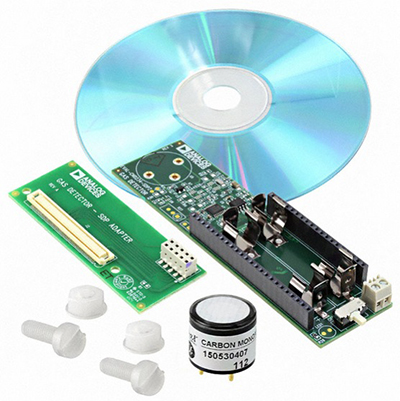 While gas sensors measure the concentration of such toxic and dangerous gases as CO2, carbon monoxide, NO2, NH3, and the absence of sufficient oxygen, these devices are just one of a variety of sensors used in mining operation. Others include:

It should be noted that all sensors used in the mining industry must function under conditions involving strong caustics, high temperatures, and harsh industrial environments. They often come with rugged, sealed sensor assemblies designed specifically for these applications.

Highly integrated and computer-controlled mine safety-monitoring systems are based on subsystems that provide real-time monitoring and rely on gas, negative pressure, temperature, and wind-speed sensors. The communication subsystem delivers wireless communication and maintains contact with a central control computer located on the surface. Real-time data regarding monitoring and communication is transmitted to the management center and mobile devices. Wireless transmission eliminates laying lines and maintaining them, while speeding up the transmission of data and improving efficiency and accuracy.

Great strides have been made to provide safety far underground for mine workers. While sensors have replaced canaries and mice alerting workers when air quality conditions are dangerous, mines remain an extremely hazardous environment: in addition to harmful and explosive gases, particles that are a result of coal mining, for example, have resulted in miners developing black lung, aka pneumoconiosis. This occupational lung disease is caused by inhaling coal dust over time so that the lung is damaged, air-sac walls are inflamed, and the lung stiffens from scarring of the tissue between the air sacs. My own grandfather, a coal miner, suffered from the condition.