The chipmaker hopes to reduce oversupply and stabilize prices. 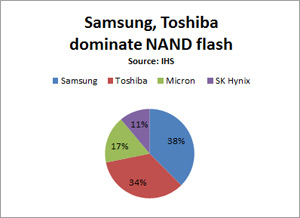 The reduction is designed to reduce inventory in the market and improve the balance between supply and demand.

Demand for computers and smart phones is expected to rise in the second half of the year. With the cutbacks of NAND flash production, supply is expected to align more closely with demand in the third and fourth quarters.

Toshiba reported it would monitor supply conditions and re-examine its production of NAND flash as necessary.

NAND flash prices have been falling for over a year, according to researcher DRAMeXchange. For instance, the average price of 32 GB 4 x 8 chip dropped from about $5.10 in June of 2011 to about $4.80 at the end of June 2012, the researcher noted.

Some suppliers reduced prices of NAND flash in an effort to spur demand. However, demand has remained sluggish for several reasons. The increase in cloud storage devices has weakened consumer demand for flash drives. In addition, shipments of the new smartphones, media tablets and ultrabooks have been delayed. The good news for NAND suppliers is production of those new devices will begin in the third quarter and will stimulate flash demand, according to DRAMeXchange.