Data-acquisition systems that use energy harvesting (EH) for all of their operating power are increasingly popular.

Data-acquisition systems that use energy harvesting (EH) for all of their operating power are increasingly popular, made possible by a combination of extremely low-power components for power management, energy storage, data processing, sensor interfacing, and the wireless radio link.

However, designing a viable energy-harvesting system is difficult and takes more than just extensive use of energy-efficient components. It needs careful planning, analysis of operating sequences and timing and understanding of trade-offs, as there are two different, asynchronous, uncorrelated processes occurring. First, collecting and storing random clumps of energy (joules or Whr), which is primarily a random process; then, spending energy via a set schedule, mostly in short bursts of power (W), the rate at which the energy is used. Of course, the total energy used must be less than the amount of energy you have accumulated, and the peak power needs must be within the capacity of the system to deliver it.

How much energy, anyway?

It is simplistic but misleading to think that using harvested power as a source is obtaining "something for almost nothing." First, both the amount of energy impinging on the transducer, and the amount it can actually produce is low, even if 100% efficient.

Second, the reality is that not only are most such sources sporadic, but also the transducers are very inefficient at converting the impinging energy into electrical energy, and this does not take into account losses within the electronics themselves. Generally, less than 10% of the energy reaching the transducer actually ends up in an energy-harvesting battery or supercapacitor for later use, whether the energy is from wind, solar, vibration, sound, RF, or thermal transducers. Table 1 shows some sample numbers. (Note: These are just order-of-magnitude approximations.)

Table 1: The amount of available power from various harvesting sources is very low, and the net power harvested is far lower.

A major up-front part of the design is working through the power and energy budget. While this seems to be an obvious statement, it is both more complicated and more important in energy-harvesting design than for many other types of design. There are several reasons for this: 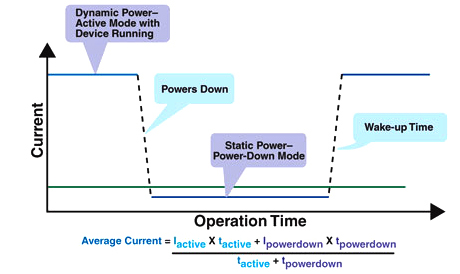 Be tough, but also open-minded when looking at the budget. Ask yourself what is available and what is needed. Certainly go with the lowest power affordable components that will meet your needs, but also balance this factor against the time period of use. If the active/sleep mode power-use ratio is 100:1, for example, and the duty cycle is 1%, that is the same power usage as 200:1 ratio and a 0.5% duty cycle (there actually is a small difference between the two if you do the math carefully and take into account the round-off approximation, but our example is deliberately a simplification). Transitions between operating phases then become critical parts of the analysis.

When doing the budget, do not ignore the obvious: many ICs characterize their cycles by current needed, but designers must look at both energy and power used, since the energy-harvesting supply must have the capacity to provide the overall energy and at the burst-power levels needed.

A typical EH-based wireless application will need a few hundred milliseconds or less to complete the sensor data collection and transmission phase. For most applications that monitor real-world processes, it is more likely that readings are actually needed every few minutes or hours, rather than every few seconds. Consequently, wireless sensors exhibit an activity profile characterized by prolonged quiescent/deep-sleep states interrupted periodically by bursts of activity.

A budget and energy/power analysis can start with a basic spreadsheet containing two sections. The simpler side shows the energy-collection budget, including losses in accumulation, storage, and management. The more complex side defines minimum/maximum values for power consumption in various operational stages, and evaluates what-if analysis versus time in each mode. Use this activity profile to assess the trade-offs of using lower-power parts and modes versus time in each mode, for both performance responsiveness and energy use.

In general, lower-clock-speed operation also implies lower energy/power consumption, and so may seem attractive. But go through the numbers carefully: with a higher clock speed, the system may be able to wake up, complete the data analysis and transmission, and go into its extreme low-power sleep mode more quickly and with less overall energy use.

A look at a representative microcontroller shows some of the numbers involved. The EFM32 Tiny Gecko family from Energy Micro AS (Figure 2) is based on the 32-bit ARM® Cortex™ architecture and includes various combinations of Flash and RAM memory. 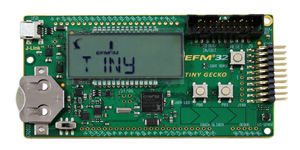 Figure 2: The EFM32 Tiny Gecko family from Energy Micro (shown here as part of a starter kit) demonstrates the extreme low-power operation of EH-compatible microcontrollers, with various operating modes to allow custom tailoring of the power profile to the application requirements.

The base unit typically consumes 180 μA/MHz when executing code (note how vendors characterize this parameter to facilitate speed/power tradeoff analysis). In deep-sleep mode, current drain is 900 nA, and in shutoff mode, it is just 20 nA. The wakeup transition is also fast and thus power stingy, registering at just 2 μs.

Other representative units are in the PIC family from Microchip Technology Inc. The PIC24F32KA304 microcontroller, for example, needs just 20 nA in deep sleep, 25 nA in sleep mode with RAM retention (note that even 5 nA is considered significant), and 500 nA in sleep mode with the real-time-clock (RTC) and calendar functions enabled. Further, it wakes up in 1 μs and uses just 500 μA/MHz.

Budgeting and subsequent planning are essential, of course, but normally must be verified by testing and confirmation. For energy-harvesting designs, however, testing is so challenging that extra effort in the up-front stages is even more important. Testing is difficult for several reasons:

Therefore, it is important to work out a test plan and budget for the design if your bench does not have the specialty instrumentation needed, nor the techniques used for extreme-low current, burst-mode current drain and power use.

Energy harvesting – perhaps better described as "scavenging"– is now a practical way to provide long-term power for data logging and other low-rate, limited-range applications. However, while it may appear to offer something for "almost free," a successful harvesting design requires careful budgeting of collected energy, power use, duty cycle, and operational modes of the overall circuit and design. This article examined some of the numbers and described how to balance the budget for a successful implementation, as well as presented some of the trade-offs and choices the designer faces.