Tips for Optimizing Performance and Energy Use of ZigBee Radios

ZigBee transceivers are a popular, and in some cases, indispensable element of modern energy management and building automation systems.

ZigBee transceivers are a popular, and in some cases, indispensable element of modern energy management and building automation systems (Fig. 1). However, not all ZigBee systems are created equal and the differences in their performance and battery life can mean success or failure for your product. A power/performance optimized design requires careful selection of host system and radio system components, but even the best reference design requires an engineer’s touch to fine-tune it for a particular application. As we’ll see shortly, design issues such as radio power management, antenna diversity, intelligent management of outbound and inbound data, and careful attention to tuning the system’s sleep modes all play a role in designing a robust, long-lived energy management device. 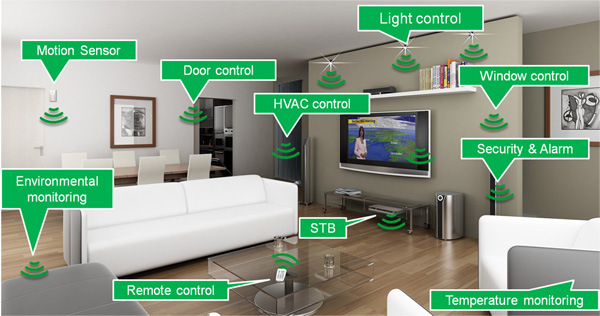 Although all commercially-available ZigBee transceivers are compliant with the standard’s simple, well-defined air interface, a system’s actual performance (i.e. how closely it matches the data rate, range, and resistance to interference of a so-called ideal system) is still dependent on the designer’s skills. Many issues involve the radio subsystem, including receiver sensitivity, transmit power, and its ability to cope with the interference, fading, and multipath conditions found in most real-world environments. These factors affect a system’s range, data rate, and how much of its theoretical capacity is consumed by dropped packets or other transmission errors. Any re-transmission of lost or garbled packets impacts the overall performance and efficiency of the communication network in terms of latency, power consumption, and increased radio activity that creates additional channel interference.

One of the simplest ways to reduce a ZigBee’s power consumption in extended networks like cluster tree or mesh is to use the protocol’s optional beacon mode. In beacon mode, special nodes called ZigBee Routers communicate with other network nodes using a time-slotted protocol in which the Router signals each node with sequential “beacon messages” that confirm its presence and, if needed, initiates a data exchange. Operating in beacon mode allows the other nodes in the network to conserve their battery power by sleeping between beacons and only waking at a pre-determined time when there is no other node attempting to access the Router. Beacon intervals may be adjusted according to the application’s minimum required response time and desired data rate, ranging from as low as 15.36 milliseconds to as long as 786.432 seconds. The ZigBee beacon mode can dramatically reduce packet error rates, but may not be appropriate for applications whose nodes produce infrequent events or do not need to be polled on a regular basis (such as wireless light switches or window position sensors). In addition, the low duty cycle operation used in systems with long beacon intervals usually requires a more precise external clock or other stabilized timing source, which may increase BOM costs.

For many applications, it is more practical to use the standard un-slotted, carrier-sense, multiple-access/collision-avoidance channel access mechanism (CSMA/CA - also known as “listen before talk”) to support a so-called heterogeneous network. In this type of network, the ZigBee Routers’ receivers remain active continuously, allowing the remote nodes to remain in a low-power state or completely unpowered until an event that requires the network’s attention occurs. Un-slotted networks rely on the CSMA (listen before talk) to minimize the inevitably higher packet losses that occur when two nodes attempt to transmit at the same time.

Both slotted and un-slotted networks can use a transceiver’s receiver signal strength indicator (RSSI) to optimize a link’s performance. When used in conjunction with packet error statistics, RSSI can serve as a mechanism to determine the optimum combination of receiver gain and transmitter output power to deliver the best levels of packet loss and power consumption. Tests conducted by Texas Instruments show that a typical system can cut its transmit mode power consumption by as much as 10 mA using RSSI measurements to adjust its RF output from 0 dBm to –12 dBm. The on-chip MCUs, used in many advanced ZigBee transceivers such as TI’s 2.4 GHz ZigBee/IEEE 802.15.4 CC253 family and Freescale’s MC13224V integrated 2.4 GHz 802.15.4 transceiver, have sufficient processing power and memory to support RSSI-based power optimization algorithms (Fig. 2). In applications which use a “dumb” transceiver, the algorithm may be run on the host system’s processor. 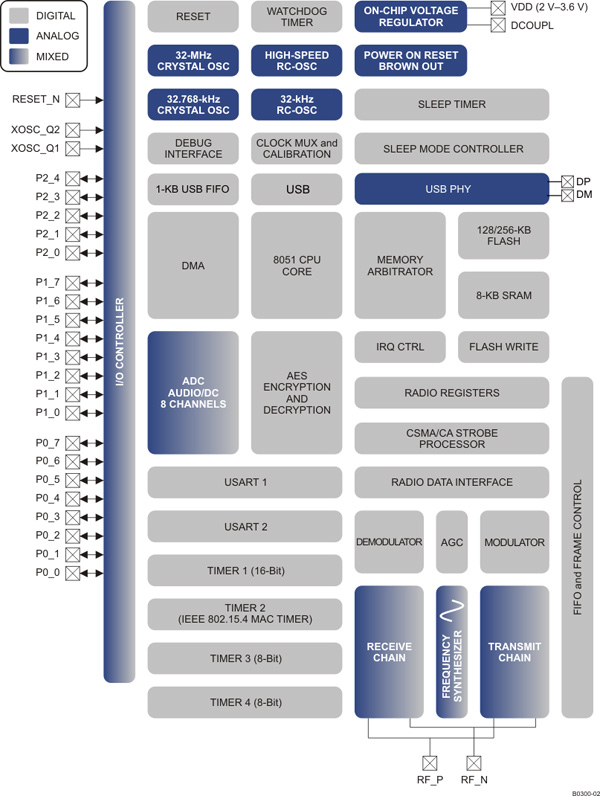 Figure 2: Texas Instruments' CC253x family of ZigBee transceivers incorporate a hardware CSMA/CA MAC, encrypt/decrypt and other logic cores to free the on-chip processor for non-routine tasks such as housekeeping functions and managing the transmit power and receiver gain settings for optimum performance.

Antenna diversity can be another extremely effective method of maintaining transceiver performance in indoor environments where random fading and other multipath issues are common. If properly-located and oriented, two antennas can insure that at least one of them is less affected by the local channel impairments. Antenna diversity is commonly-used in other wireless protocols such as Bluetooth and Wi-Fi because the protocol’s long packet headers provide a relatively long interval in which to determine the antenna that has the best signal. ZigBee’s short 4-bit preambles give the receiver a much shorter interval in which to determine each source’s signal quality.

ZigBee’s short preamble meant that until recently, transceivers could offer only limited, software-based antenna diversity, where the radio receives packets on a default antenna, and only switches to its alternate source when it detects a series of dropped or garbled packets. The first devices to offer true per-packet antenna diversity were developed recently by GreenPeak Technologies. Their receiver architecture uses a specialized DSP to analyze the quality of the signals at both antennas during the short preamble period and select the input which is most intelligible. This feature enables significant reductions in operating power by reducing packet re-transmits and lower transmit power settings. Per-packet antenna diversity also adds 9 dB to a typical link budget, allowing ZigBee’s 0 dBm signals to deliver the range and coverage normally enjoyed by much-higher-powered Wi-Fi networks.

It’s also important to understand how hardware and software affects the way your system enters and emerges from its energy-saving sleep modes, and how they can be adjusted to meet the demands of a particular application. The ZigBee transceiver and its associated MCU must spend as much time as possible in a low-power snooze or sleep mode, but also be able to respond promptly to any critical event it’s expected to encounter. Striking the right balance between system response time and energy consumption avoids wasting part of the ZigBee channel’s limited channel capacity on lost time slots or retransmission of dropped packets.

It is also often useful to consider alternatives to the deep sleep mode that do not retain any data and require a long boot and warm-up sequence to bring the transceiver back to life. Unless your system is expected to spend days or weeks in a completely dormant state, putting the system into a light sleep which has a short wake-up time can produce a lower power profile than using a deep sleep mode. For example, devices like Green Peak’s GP500 transceiver have a warm start period of 1 µSor less. In comparison, most transceivers require 2 mS to 10 mS for a cold start. Likewise, Energy Micro’s recently-introduced EFR4D “Draco” series of ZigBee transceivers is based on their EFM32 “Tiny Gecko” family of energy-efficient 32-bit ARM Cortex MCUs support a highly-granular set of sleep modes which allow various levels of memory retention and peripheral activity (Figure 3a). Additional energy savings are provided by the EFM32’s Peripheral reflex system (Figure 3b) which allows the MCU’s timers and I/O devices to function autonomously while the CPU remains in a low-power sleep state. 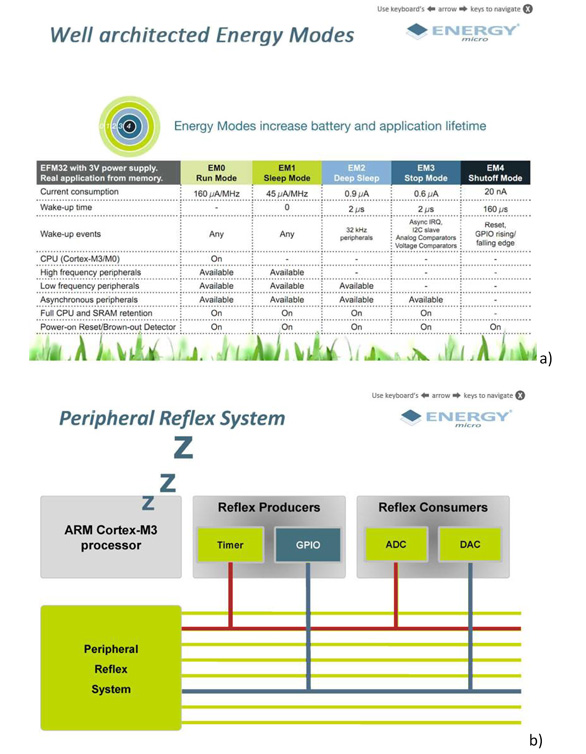 Figure 3: Energy Micro’s EFM32 MCUs feature a highly-granular set of sleep modes (a) and a “peripheral reflex system (b) that allows the devices’ timers, I/O and other peripheral functions to function while the CPU sleeps.

Since each application’s requirements are unique, it’s tough to find any absolute rules for optimizing a particular design’s energy consumption. Nevertheless, there are some useful guidelines that should be applied to nearly any ZigBee-based development effort. These include: