White LEDs and the result of temperature changes including chromaticity changes along with the change in commercial chips.

LED manufacturers go to great lengths to ensure their high-brightness chips operate efficiently, last a long time, and provide aesthetically-pleasing illumination. However, solid-state lighting is complex, adhering to the counter-intuitive laws of quantum mechanics, and getting the same results from a product in the field, as those recorded under test at the factory is difficult.

A major part of the challenge is due to the LEDs’ sensitivity to temperature changes. The chips naturally run hot, and without adequate thermal management, overheating occurs and performance rapidly degrades. However, even with reasonable measures to encourage the heat away from the p–n junction at the device’s core, it is all too easy for the temperature to creep up during operation. Just a few tens of degrees is enough to change the output spectrum, altering the chromaticity (color) and potentially disappointing a consumer who has grown up with the consistent glow of incandescent bulbs or fluorescent tubes.

This article explains why increased temperature changes the light output from white LEDs in the short-term, describes the magnitude of the change in commercial chips, and looks at how far the temperature can rise before chromaticity changes become noticeable to the human eye.

LEDs are cool. Their compact size allows designers to create fashionable lighting fixtures that were previously impractical with bulky and fragile incandescent or compact fluorescent bulbs. However, solid-state lighting, despite its deserved reputation for high efficiency, is only figuratively cool. In operation, the chips generate plenty of heat.

Incandescent bulbs also run very hot, but the heat is dissipated as infrared (IR) radiation over a wide area so there are no hotspots. In contrast, LEDs generate heat where all the action takes place, at the junction between the p-type and n-type semiconductors. This junction is tiny, dramatically increasing the power density, as well as making it difficult for the resultant heat to escape.

This heat comes from the recombination of electrons and holes in the semiconductor lattice. Ideally, the recombination results in a photon that exits the LED and contributes to the overall illumination. Unfortunately, much of the time that desired outcome does not occur. For example, sometimes the recombination results in a photon, but it fails to escape from the crystal due to internal reflection and is reabsorbed, generating a tiny amount of heat; and at other times a phonon (a quantum of energy analogous to a photon) results from the recombination leading to a vibration of the crystal lattice and yet more heat (see the TechZone article “Understanding the Cause of Fading in High-Brightness LEDs”). Despite the valiant efforts of the major LED makers to improve the efficiency of their devices, some 70 to 80 percent of the electrical energy applied to the device is still converted to heat rather than light.

If the LED consistently runs hot, its lifetime is severely compromised1 (see the TechZone article “ABCs of LED Thermal Management”). Figure 1 illustrates how longevity is affected by operating temperature. In this example, the device substrate temperature (Tb) is recorded, but this is proportional to the junction temperature. Note how a difference of 20°C reduces the LED’s life from 32,000 hours to just 7,000 hours. 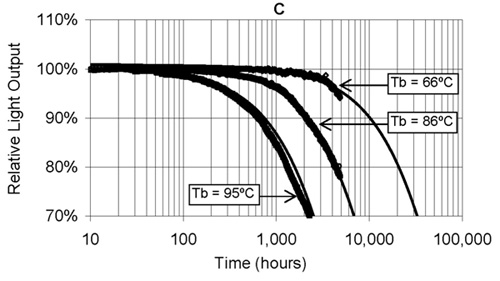 Figure 1: The effect of board temperature on white LED lifetime. (Courtesy of the Lighting Research Center.)

While high temperatures are fatal for an LED in the long run, some lesser short-term effects can also undermine consumer confidence in solid-state lighting as a replacement for traditional illumination sources. Chief among these is the influence temperature has on LED chromaticity.

The CCT is defined using the Commission Internationale de l'Eclairage (CIE) chromaticity space (CIE 1931 x, y, z). The LED’s output lies on or close to the Planckian locus that corresponds to the color that an incandescent “black body” would appear to radiate with changes in temperature.

In the majority of cases, a ‘white’ LED combines a blue chip with a yttrium aluminum garnet (YAG) phosphor. A proportion of the blue light from the LED is absorbed by the phosphor, which then re-emits it as white light due to a phenomenon called Stokes shift (see the TechZone article, “Whiter, Brighter LEDs”). Manufacturers spend a lot of time and money on the LED and phosphor to ensure that the emitted light matches the specification and consumer’s expectations.

But the LED’s color is (typically) specified at an operating temperature of 25°C. When the temperature rises, the color changes. The reasons for this change are complex, but in simple terms, it is due to the change in the LED’s p- and n-type semiconductor lattice constants, which are the distances between the unit cells in the crystal structure (Figure 2). 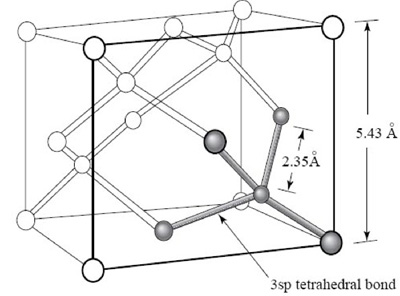 Semiconductors are characterized by a level of conductivity that falls somewhere between metals and insulators. Conductivity in materials is governed by the “band gap.” The band gap is the energy differential between electrons that are constrained to the outer shells (or outer “orbits”) of the parent atoms (the valence band) and those that have gained sufficient energy (usually by thermal excitation) to escape the parent atom to become mobile and hence free to act as charge carriers (the conduction band).

In an LED, near the p-n junction, electrons in the n-type material conduction band can “drop” into holes in the p-type valence band by emitting energy corresponding to the energy differential across the band gap. If the energy is released as a photon, its energy (and hence wavelength and color if in the visible part of the electromagnetic spectrum) is proportional to the band gap.

The net effect is that the output from the blue LED shifts slightly to the red end of the spectrum, and the Stokes shifted photons emitted from the phosphor are in turn slightly affected. The output of the LED is a combination of the spectra from these two sources and is in turn altered slightly.

Commercial LED vendors such as Cree, OSRAM, and Seoul Semiconductor do include information about chromaticity shift for their white LEDs in the data sheets. Plotting the CIE 1931 x, y, z chromaticity coordinates is sometimes used to illustrate this information. Figure 3 shows part of the datasheet from a device in Seoul Semiconductor’s Acrich Multi-Junction Technology (MJT) LED range. The warm white version of the chip from this range produces 50 lm at a forward current of 25 mA (this is a high-voltage (21 V) device) with an efficacy of 119 lm/W.

An alternative method of showing how the color of a white LED changes with temperature is to plot the device’s CCT directly. Figure 4 shows such a plot for Cree’s XP-E XLamp®. The warm white version of this chip (XPEWHT-L1-0000-00AE7) is a 91 lm device (at a forward current of 350 mA) with an efficacy of 81 lm/W. 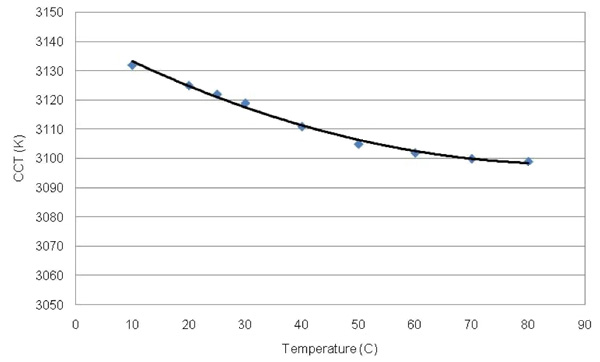 For its part, OSRAM chooses a different technique to quantify the chromaticity shift for its high-brightness LEDs. The company includes individual plots for Cx and Cy against junction temperature in the datasheet. Figure 5 shows such a graph for OSRAM’s warm white OSLON SSL LED. This particular chip is a 109 lm device (at a forward current of 350 mA) with an efficacy of 100 lm/W. 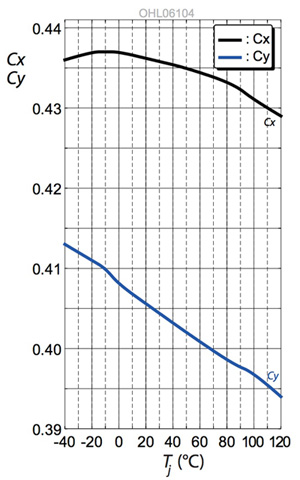 Figure 5: Chromaticity shift with temperature for the OSLON SSL LED.

The color of a white LED will change with temperature no matter from which company the product hails. However, because the major manufacturers have elected to use different graphical representations of the chromaticity shift for their respective LEDs, it is difficult to draw direct comparisons between devices.

So how does an engineer make that direct comparison, and how big can the change become before the consumer notices? The answer is to plot the chromaticity shift on the CIE color space. Figure 6 shows such a plot for the Cree XP-E LED shown in Figure 4 above.

(In this particular example, the chromaticity shift is not the plotted on the CIE 1931 x,y,z color space, rather a variant of the color space topology called the CIE 1976 L u'v' color space. This was created to correct for the CIE 1931 x, y, z color space distortion by distributing colors roughly proportional to their perceived color difference. A region that is twice as large in u'v' will therefore also appear to have twice the color diversity - making it far more useful for visualizing and comparing different color spaces.3) 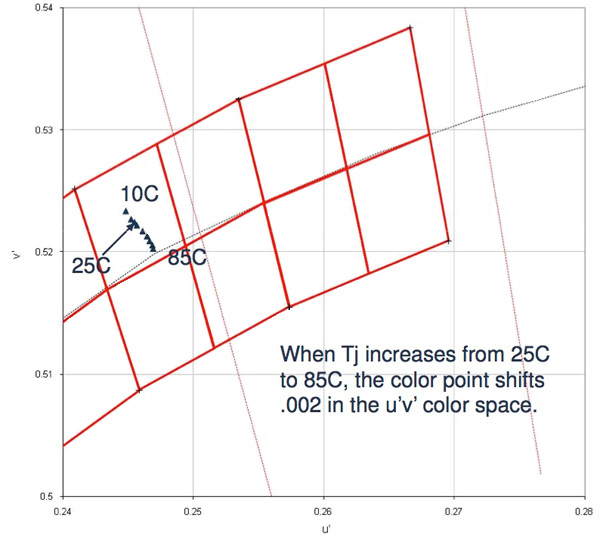 Over the range of 25-to-85°C, the LED’s color point shifts about 0.002 in the CIE 1976 L, u’, v’ color space. The shift is confined to a single bin defined by the red quadrilateral; the bins are sized such that devices grouped therein appear to be the same color to the human eye. So for this example, the chromaticity shift would be imperceptible to the consumer.4

It turns out that the smallest color difference that the human eye is able to sense is approximately 0.003 in the yellow and orange regions of the color space and 0.004 in the red region.5 And while 85°C is hot for an operating LED, it is by no means exceptional. OSRAM, for example, specifies that the maximum acceptable temperature for the junction of the OSLON SSL 80 is 135°C. Operating the device at this temperature would likely cause the chromaticity shift to become noticeable.

Although the shift in chromaticity due to short-term exposure to high temperature is quite small of itself, it is not the only influence on color change. For example, the color of the light emitted from an LED also changes as the device ages, and if the device is dimmed using analog techniques then the device’s color can vary as the output is dialed down (see the TechZone article “Digital Dimming Solves LED Color Dilemma”). These small effects, combined with the temperature-induced chromaticity shift, can add up to a significant change in color – leading to consumer disappointment.

Heat is the LEDs enemy in both the short- and long-term. Not only will high temperatures detrimentally affect the color of the LED, it will degrade both the chip and phosphor, causing a rapid tail-off in luminosity, and eventual failure (defined as the point at which the LED delivers only 70 percent of its luminosity when new).

The answer is to design the luminaire with due consideration to thermal management. Fortunately, there are plenty of products that can help the engineer manage the problem ranging from substrates for mounting the LED die such as Bergquist’s board for Cree XLamps to heatsinks such as Nuventix’s 47 W spotlight cooler (Figure 7). For more information on cooling, see the TechZone article “Cooling Solutions for LED Lighting”). 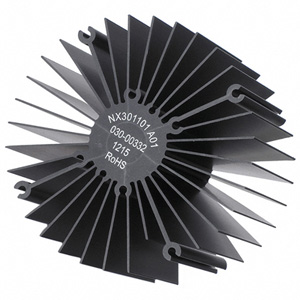 For further information on the parts mentioned in this article, use the links provided to access product pages on the Hotenda website.