The Z8 Encore!® MCU as an LCD Driver

Driving a multiplexed, 4-segment LCD is a straightforward matter using an 8-bit MCU, a small BOM, and the downloadable code provided in this article


Driving a multiplexed, 4-segment LCD is a straightforward matter using an 8-bit MCU, a small BOM, and the downloadable code provided in this article.

Directly driving an LCD can be accomplished without a dedicated LCD driver on the microcontroller, and requires few additional resources. There are two types of LCDs — static and multiplexed. This article discusses the programming of the multiplexed LCD in conjunction with Zilog's Z8 Encore!® microcontroller.

A static LCD features a separate pin for each segment of the LCD and a common backplane pin. A requirement for illuminating a segment is to bias the segment in opposition to the backplane. An additional requirement is that LCDs cannot allow direct current (DC) to be present on a segment.

To prevent DC on a segment, the backplane is driven with a low-frequency square wave, and the segments are toggled with respect to the backplane.

The next engineering task is related to the voltage required to illuminate a segment. The ON drive level of a multiplexed segment is reduced because the segment spends most of its time in an IDLE state and is only asserted 25 percent of the time. In effect, this statement means that at lower operating voltages, a segment may not illuminate.

A further complication is that the segment can perceive a voltage potential while in its OFF state as the shared segment pin is being asserted by the currently active backplane. These contrasting problems may become worse as more backplanes are added to the display, because with each additional backplane, the available ON voltage is reduced, and the residual OFF voltage is increased.

Figure 2 displays how contrast decreases with each backplane, due to the fact that there is less difference between an ON segment and an OFF segment. In Figure 2, a static display with one backplane receives 100 percent of its available Vcc for an ON voltage and 0 percent for an OFF voltage. In the three-plane example, one-half of the Vcc is available for ON voltage and an OFF segment receives one-quarter of the Vcc. LCDs vary from one manufacturer to the next, but the typical threshold voltage is 2.3 V RMS. 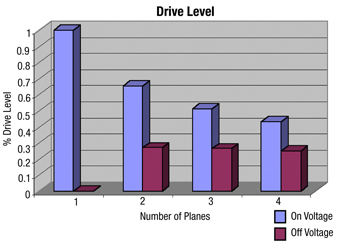 With only one-half of the Vcc available for ON voltage, it is easy to see how a 3.3 V microcontroller is unable to directly drive a multiplex LCD. The purpose of this article is to show that you can drive a multiplexed LCD on the 3 V Z8 Encore! MCU.

To drive a multiplexed LCD with a 3 V MCU, the drive level must be boosted. To reduce gate count and complexity, only the backplanes are boosted. Segment drive voltages swing above and below one-half Vcc; therefore, a boosted backplane signal must perform in the same manner by using the Z8 Encore! MCU's port pins as two charge pumps referenced at one-half Vcc. IC1, the 4050 buffer is used to provide the level-shifting function.

Each backplane is driven high, and idled while the other planes are driven. The process is inverted to remove any DC component, as shown in Figure 3. 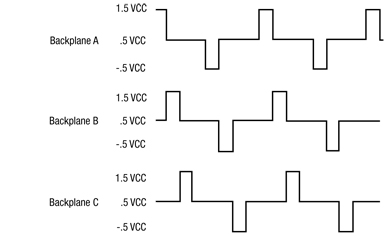 Due to the additional speed and memory of the Z8 Encore! family, it is assumed that development occurs in the C programming language. Applications written in C can be easily ported to different environments, if the software is written to allow easy porting.

With this in mind, macros are used for the I/O-specific operations so that the bulk of the software will remain untouched if the code is ported to another device.


/*Charge pump definitions
The charge pumps boost the segment drive voltage and are serviced each timer interrupt. The Positive pump is pulled Low to charge and floated to an input state. The negative pump is floated when charging. The cap is referenced at 1/2 VCC and the charge on the capacitor appears to be VCC +/- the reference. The macro also initializes the port mode for the port so it is always refreshed.
*/
#define ChargePumpsPDADDR=PxHD;
PDCTL|= B3|B4; PDOD&=~B3;
PDOD|=B4; PDADDR=PxOC;
PDCTL&=~(B3|B4); PDADDR=PxDDR;
PDCTL&=~(B3|B4)
#define FloatPumpsPDADDR=PxDDR; PDCTL|=B4|B3

The following macros manage the backplane drive. These macros are complex, as only one pin is required per backplane, but two pin states are required for each backplane.

Finally, the macros for driving the segments.


/*This next macro takes the individual segments stored in the display buffer and places them on the ports. It could have been done without the macro but this makes it more generic. There will be six planes with two buffers because there are more than 8 segments*/
#define DisplaySegmentsPAOD&=~0xF8;
PAOD|=(buffer[plane]&0x00F8); PCOD=0;
PCOD|=((buffer[plane]&0x7F00)>>8)

As mentioned earlier, the difficult programming involved in multiplex LCDs is a rather unusual multiplexing scheme. The previous macro simply places the previously decoded segments from the buffer onto the ports. As the decoding process is so involved, it is not performed in the Interrupt Service Routine (ISR). ISRs must be kept as short as possible; all that is required in the ISR is to set the backplanes and drive the segments. The buffer is an integer array which holds the 12 segments used in our display. The single dimension in this array is the plane. There are six planes in this dimension, one for each backplane state: A, B, C, A', B', and C'. When the decoding process is complete, the buffer must be loaded with the 12 segments of data across the six planes.

The first step in decoding is to define how the characters are displayed. This definition is universal for all seven segment displays. Therefore, the following code segment can be reused.

The segments are scattered across three separate backplanes, and must be arranged in a single byte as three packets of three bits. The last bit is unused. This arrangement mirrors the physical layout of a display digit (see Table 1).

Our goal is to place the segment data into three integers — one for each display backplane. The software must split the single byte representing the seven-segment character into the three segments by three planes. Table 2 indicates how the integer array stores the individual segment bits.

As each digit of the LCD requires three segments, addressing the correct segment pin requires shifting the data over three bits for each digit. Finally, the correct physical pin of the microcontroller must be addressed. The assignments in the following code segment can change based upon the board layout and other resources.

The following code segment determines which segments turn ON for a particular character.


Storing the correct segment to turn ON requires testing each individual bit. The advantage is that the code becomes very portable, as shown here:

/*We have an assignment here rather than setting a single variable in the statements above because a timer IRQ occurs while the segments are being gathered and that will cause the display to flicker. The last three buffers are simply complements of the first three. */

The actual code required for directly driving an LCD is not very complex. The time required to decode the individual segment planes in this C example is only 141 µs. The advantage is the ability to drive very large displays directly without an additional LCD driver, or the use of a microcontroller with a dedicated driver. The only disadvantage is the additional pins required for the charge pumps and backplane drive, but in most cases the additional pins are cheaper than a dedicated driver.

Figure 4 shows the schematic diagram for an LCD drive using the Z8 Encore! MCU. Code for this project is available on Zilog's web site at www.zilog.com/docs/z8encore/appnotes/an0162-sc01.zip. 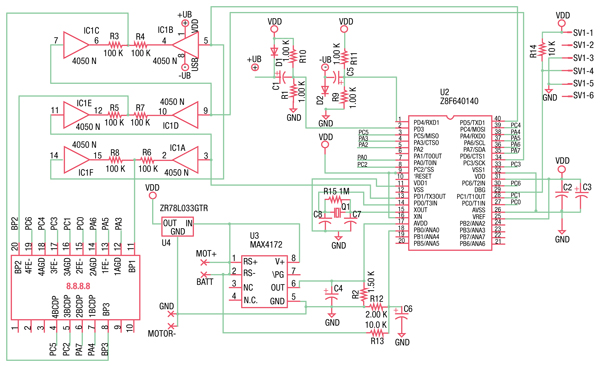