The Use of Sensors in Commercial Lighting Applications

The commercial lighting sector is becoming more complex as new lighting sources are introduced and people's expectations of what they can do grow.

The trend towards ‘green’ buildings, which are designed to reduce the energy used during their construction and operation, is pushing contractors to find more efficient ways to control the amount of energy used in commercial lighting. One obvious way to do this is to use motion sensors to check whether a room or open-plan space is occupied, and adjust the lighting accordingly.

Pyroelectric devices, such as passive infrared sensors, are often used for this type of occupancy sensing, as well as in the more familiar context of burglar alarms.

For commercial premises, the sensor needs a reasonable sensing range. Parallax, Inc. makes the 555-28027 passive infrared (PIR) sensor with a sensing range of about 20 feet, depending on the operating conditions. It is a simple three-wire device, with a single-bit output indicating when motion is sensed. The sensor usually needs a ‘warm-up’ time to adapt to its operating environment, but this won’t be an issue in commercial applications in which the lighting control system is always on.

Zilog takes the PIR sensing strategy a step further with its ZMotion family of detection and control products. The difference here is that the ZMotion parts include a microcontroller, rather than having to be connected to one like the Parallax parts, and are available with a variety of lenses to match the sensor’s region of operation to a particular application. The local microcontroller can be programmed with a variety of sensing algorithms, again to tune the way the sensor works to the application. The result, according to Zilog, is a more sensitive and stable sensor, which should lead to fewer false positives.

The Fresnel lens options shape the area over which the ZMotion sensors work. An ‘Animal Array’ version is designed for use very high up on warehouse walls, or mounted where two walls meet. Mounted 2.1 meters up a wall, Zilog says the Animal Array can sense an 88° arc in front of it, out to a radius of 15 meters. 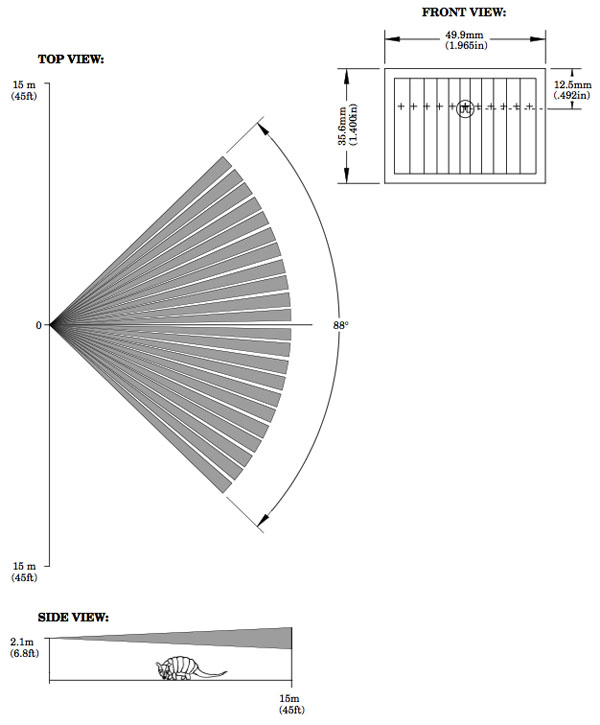 The company also offers a number of versions of a ceiling-mounted sensor, in which windows cut in the Fresnel lens create a conical sensing pattern. Different versions of this pattern affect the shape of this cone so that the user can choose whether the sensor focuses most strongly on movement directly under it, or it at the perimeter of the cone. There are also versions of the ceiling-mount lens that create a rectangular sensing footprint suitable for monitoring corridors, and others which have an adjustable sensing footprint that depends on the position of a tab on the sensor housing. 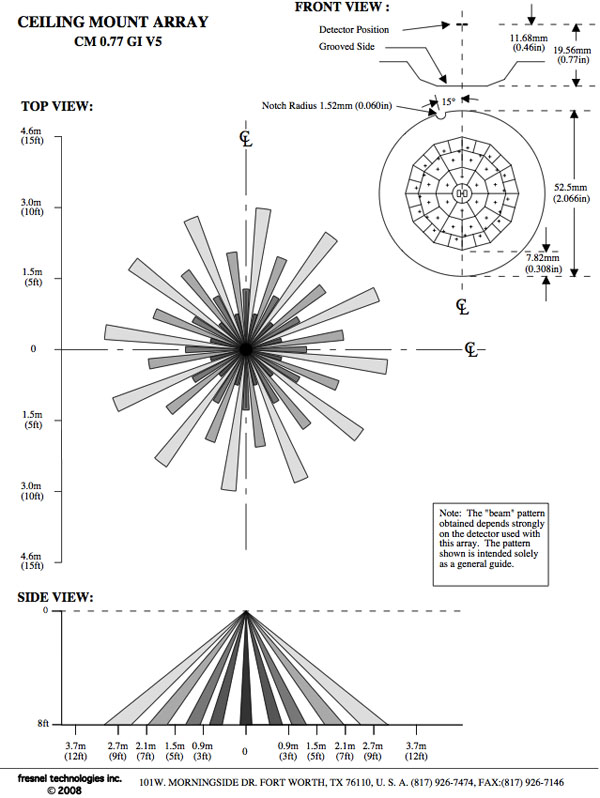 Figure 2: Other versions of the Fresnel lens covering shape the sensing area of the ceiling-mounted version of the ZMotion PIR sensor.

The onboard microcontroller has 4 Kbyte of Flash memory for application code, and a ‘PIR Software Engine,’ controlled through onboard registers, which sets up the part to work with each combination of lens and sensor. The part also offers sensitivity and range control, as well as detecting the direction of motion of something intruding into its sensing area.

The desire for more efficient buildings, plus their increasing technical content, means that a number of building management standards and systems have been introduced to connect and coordinate building functions such as lighting, heating, ventilation and air conditioning systems, security, and access control. A separate standard for controlling lighting, known as DALI (Digital Addressable Lighting Interface), has been standardized by the International Electrotechnical Commission as IEC 62386. DALI is specifically not a full building management system, limiting itself to lighting control, although interfaces between it and these more comprehensive systems may be developed.

DALI relies on controlling the electronic ballasts used to drive modern lighting, such as compact fluorescent bulbs. By adding an extra two wires to a lighting ring in a room, all the DALI-compliant ballasts can be accessed and controlled individually making it relatively simple to program lighting scenarios, such as lighting a conference room in different ways depending on whether you are having a round-table discussion or a presentation.

The simplicity of the DALI approach also creates new opportunities for sensors to be pressed into service to make lighting more efficient. For example, occupancy sensors could be distributed into individual luminaires to enable more fine-grained control over unused lighting. Ambient light sensors could also be distributed throughout the luminaires so that their brightness could be adjusted depending on the amount of light coming in through windows. The DALI website also suggests embedding infrared receivers into individual luminaires, so that one lamp, or a group of them, could be controlled by pointing a remote control at it.

Getting a true measure of ambient light intensity is more complex than it sounds, for two reasons. The first is that the ‘color temperature’ of the ambient light in any room will depend on the quality of natural light coming in through the window, which varies during the day, and the mix of wavelengths emanating from the variety of luminaires used in commercial lighting. The second reason is that most ambient light sensors have a very clearly defined sensitivity to the spectrum, so that lots of warm afternoon light, for example, might not produce such a strong output as the cold, clear light of dawn.

If you are prepared to accept that your ambient light sensing is only ever going to offer an approximation of reality, then there are a variety of sensors available to do the job.

The most straightforward approach here is the cadmium disulphide sensor often seen in children’s electronics kits but offering a low-cost approach to real-world applications as well. For example, Advanced Photonix offers the PDV-P8103, a CdS cell that it says is suitable for applications such as setting camera exposure, shutter controls and automatic nightlights. The light dependent resistor can handle voltages up to 150 V, has a Dark resistance of at least 500 KΩ, an illuminated resistance between 16 KΩ and 33 KΩ with 10 lux illumination, and a sensitivity of 0.75 Ω/lux. Its spectral range is 400 nm to 700 nm.

More sophisticated approaches to ambient light control might seem like overkill for an office environment, but in the retail sector, ensuring that products are correctly lit is vital. Go into a supermarket and you’ll find that the fruit and vegetables are lit with bright white light that simulates sunshine, the meat counter is lit with a slight pink glow and the bakery area is a warm yellow, all as a way of providing subconscious prompts to your buying decisions. ROHM makes an ambient light sensor, the BH1600FVC-TR, which is designed for use in adjusting backlight brightness but could be pressed into service in more general applications. The part has an analog current output in proportion to brightness, and ROHM claims that its spectral sensitivity is close to that of the human eye, which would be important in places such as clothing stores in which accurate color representation is important.

Intersil has another part designed for backlighting, especially in automotive applications, which might also be usefully turned to more general ambient-light sensing applications. The ISL76683AROZ-T7 is an integrated light sensor with a 16 bit digital output delivered over an I2C interface. The part has an integrating ADC that can reject the 50 Hz and 60 Hz flicker often caused by artificial light sources. It can also be programmed to operate in one of four sensitivity ranges, and to deliver an interrupt when an upper or lower threshold is crossed. 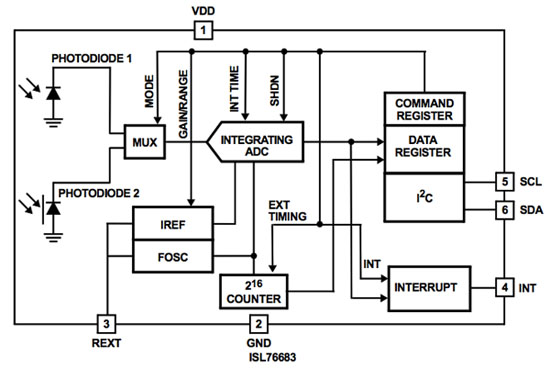 Figure 3: Intersil’s ambient light sensor has an integrating ADC that helps it reject the impact of lighting flicker caused by the 50 or 60 Hz mains supply.

The increasing use of RGB LED lighting, first seen in ‘wall-washers’ in clubs and restaurants, could also prompt demand for color sensing technology in commercial lighting. RGB LED lights enable the user to dial in any color by adjusting the mix of the three components. While this makes for great flexibility, shops and particularly retail brands will be sensitive about using exact versions of their brand colors. Incorporating colorimetry systems in LED lighting would provide a feedback loop that would help ensure that the RGB output remains stable as the LEDs age and ambient lighting conditions change.

There are some useful TechZone articles describing the basics of color mixing with red, green and blue LEDs and showing how this process can be managed by a microcontroller. Author Kristin Lewotsky discusses the technique in the context of developing stable architectural lighting systems using LED strings and writes:

“Dynamic tuning can … generate precise, consistent color from strings of LEDs, despite variations introduced by temperature fluctuations and age.”

Signs are becoming more active too, perhaps flickering on as you pass by on an escalator, or starting a video as you approach a counter. Such signs borrow the motion sensing technology used in building systems, but apply it over a restricted area: think Tom Cruise running through the shopping mall in the film Minority Report. Some are even beginning to include cameras, for example to show shoppers how they would look with different hairstyles or in a range of clothing.

Touchscreens are also being introduced to signage - think of those real estate agents’ windows that allow you to browse their listings by using a touchscreen that works through the shop window. In high-end auto showrooms, large touchscreen displays are being used to help potential buyers see how their new automobiles would look with various combinations of paint, interiors and accessories.

To some extent, touchscreen technology for retail signage has to meet the same standards of reliability and ruggedness that apply to industrial applications.

For example, IR Touch Systems offers the E series of IR touch overlays for screens from 6.4 in to 24 in on the diagonal. The company says its technology will work with a finger, gloved hand or even an opaque object, such as the end of a pen.

Bergquist offers the 400384 five-wire, 15 in touchscreen overlay, which uses a resistive technique to sense the touch position and which the company claims is particularly suitable for use in harsh environments.

3M offers the MicroTouch System SCT3250EX range of all-glass capacitive touch overlays. The company claims that its all-glass design makes it more transparent than competing touch technologies, which could be important in high-end retail environments. Surface coatings have been applied to increase the durability of the panel and make it suitable for applications such as ticketing and gaming machines, self-service and information kiosks, and healthcare displays.

The commercial lighting market is being driven by a number of forces. Regulation is ending the use of incandescent and halogen lighting in favor of low-energy fluorescents and LEDs. Fashion is driving the proliferation of light sources and luminaires. Technology, such as building management systems, is trying to incorporate the management of lighting into the wider management of the whole commercial or residential environment. Together, these forces are making it increasingly important that lighting becomes intelligent, so it can sense its environment and avoid wasting power, maintain its output at the original specification, and take part in wider management schemes. The right choice of sensors, applied in intelligent ways, can help lighting designers meet all these challenges.