The SEPIC Option for Battery-Power Management


The single-ended primary inductor converter (SEPIC) is a type of DC-DC voltage converter (“regulator”) that is able to both step-up (“boost”) and step-down (“buck”) an input voltage; a useful characteristic for obtaining the maximum capacity from a battery when the silicon voltage requirement is above the battery’s low-voltage range.

The traditional buck/boost converter can do this too, but the SEPIC has a number of advantages over its conventional counterpart. This article describes the SEPIC-voltage-regulator topology and its advantages, and reviews some of the latest SEPIC-based power modules.

As a battery discharges its output voltage diminishes. For example, a single lithium-ion (LI-ion) battery supplies 4.2 V when fully charged, dropping to 3 V at the end of discharge point. Figure 1 shows a Li-ion discharge curve under a load of 0.2 C (where C is the battery’s rated capacity in ampere-hours. The battery would therefore be expected to last five hours under this load). 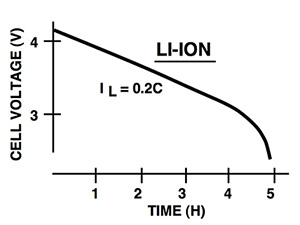 DC-DC voltage regulators for mobile products are designed to convert a battery’s (variable) voltage into a constant voltage suitable for sensitive silicon. Linear regulators use a variable resistor as a voltage divider with regulation provided by a feedback loop (see the TechZone article “Understanding the Advantages and Disadvantages of Linear Regulators”).

A linear regulator’s “buck-only” configuration can be a drawback in portable systems because the product stops operating when there is still some capacity left in the battery. For example, if the silicon requires 3.3 V then the product powered by the battery operating under the conditions shown in Figure 1 will be “exhausted” after just over three hours (instead of the five hours calculated from its nominal capacity).

Switching DC-DC voltage regulators are more flexible. In certain configurations, switching regulators are able to flip from a buck to step-up (“boost”) mode when the battery drops below a critical voltage. After the mode change, the output of the regulator will be higher than the input voltage, supplying a constant voltage to the silicon while maximizing the battery’s capacity.

An example of such a device is ON Semiconductor’s NCP3064 buck/boost-switching-voltage regulator. This chip can operate from a 1.25 to 40 V input to deliver a 3 to 40 V output at a current of up to 1.5 A. Peak efficiency is 90 percent.

The advantages of SEPIC

A switching converter in a typical buck/boost configuration is shown in Figure 2. The output voltage is the product of the duty cycle of the pulse-width-modulation train and the input voltage. This type of device is popular in battery-powered applications because of its high efficiency. 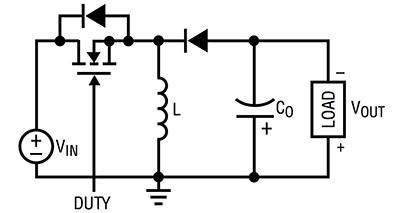 One key characteristic of the basic buck/boost topology is that the voltage at the load is inverted compared to that delivered by the battery. This voltage inversion can add complexity to a design, particularly when supplying analog components.

In comparison, the SEPIC regulator is based on the buck/boost design but with the addition of an extra inductor and capacitor. Moreover, one end of the primary inductor is connected to the battery-positive terminal (hence SEPIC’s name.) The capacitor blocks any DC component between the input and output. The addition of this capacitor means that a second inductor must be added so that the diode’s anode can connect to a known potential. This is accomplished by connecting the diode to ground through a second inductor.

Since the same voltage is applied to the inductors throughout the switching cycle, some designs see both inductors wound onto the same core with the advantages of reduced component count and a more compact design.

The SEPIC configuration (Figure 3) retains the benefits of the buck/boost topology for battery-powered designs but with the key advantage that the SEPIC’s output voltage is the same polarity as the input. 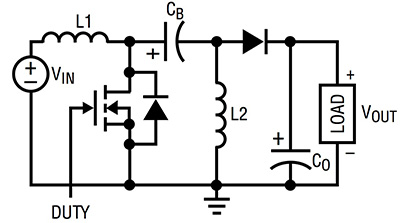 The SEPIC design boasts a number of other benefits. First, the capacitor coupling energy from input to output allows the device to deal with short circuits in a more controlled manner than the traditional buck/boost design. Second, when the switch is turned off the output of the SEPIC regulator, unlike a buck/boost configuration, drops to 0 V. Third, the SEPIC design uses minimal active components and is supervised by a simple controller, saving cost and board space. Finally, because the SEPIC regulator uses a “clamped” switching waveform, it exhibits reduced noise from its high-frequency switching operation easing electromagnetic interference challenges.²

The most notable downside of the SEPIC topology is a reduction in efficiency due to the small additional parasitic capacitances and impedances associated with the extra capacitor and inductor. The magnitude of the effect varies according to the application, but whereas a typical buck/boost device might boast an efficiency of up to 92 percent, an equivalent SEPIC will exhibit a peak efficiency of around 90 percent.

Like their conventional buck/boost counterparts, SEPIC- voltage regulators based on modular-power management chips come from a range of suppliers. These modules integrate the key components of a switching regulator into a single chip easing some of the challenges of circuit design. Typically, however, such modules do not include the inductors and capacitors (see the TechZone article “The Inductor's Role in Completing a Power Module-Based Solution”). Engineers are advised to source a module designed for SEPIC operation and then follow the manufacturer’s applications notes to select and design-in the appropriate external components.

The SEPIC-voltage regulator is a good choice for non-isolated battery-powered systems. The topology is able to both buck and boost the voltage, and unlike a conventional buck/boost regulator, supply a non-inverted- and zero-volt output.