The Other LED Market: LED Drivers

There is a lot of chatter nowadays about LEDs, LED backlights, LED lighting, and even metalorganic vapor phase epitaxy (MOCVD) equipment, but not much about the market for LED drivers and driver ICs. The driver design determines the performance of the LED product and will be the key to enabling the price and performance requirements for general LED lighting. In fact, the marriage of the driver electronics and the LEDs is the product. Yet the LED driver market is an active but largely invisible one, at least to much of the industry.

The reasons are many. One supplier told us that explaining LED drivers to customers requires a “deep dive” that few have the patience or expertise to sit through. There is also a misperception that driver technology is static and standardized. The reality is far different; every application requires a unique driver design, with the suppliers innovating to keep up with changes in the end products, such as the migration from keypads to touchscreens, LED camera flash, and various flavors of LED TV backlights. Even the processes used to make the driver ICs are evolving.

Also, the influence of drivers is deep, but subtle. For example, using the simplest driver design may require tight binning of LEDs that drives up the cost of the LEDs. Using a more refined driver design can relax the requirements on binning, saving money. In another example, LED drivers are rated for the maximum output power they can deliver, and the efficiency at full load; for example, 90 percent at 35 watts. However, the power loss can be substantially more if the circuit is not fully loaded. Such nuances in design are familiar to many analog engineers, but many lighting products nonetheless use inferior designs because of inexperience, or to save cost.

LED driver IC sales are not inconsequential; they will reach nearly $3.5 billion in 2015 from nearly $2 billion in 2010. That is a compound annual growth rate of 12 percent, similar to that of LEDs. Moreover, there is a surprising amount of innovation in LED driver and driver IC design.

Figure 1 shows the growth of LED driver ICs in different major applications. Sales for LCD backlights will dominate through the next four years, with strong growth from edge-lit TVs and monitors. The next “next big thing” is LED lighting. Early applications have been in the market for years, but replacement bulbs are taking off as a response to improvements in technology and the phasing-out of incandescent bulbs. The production value of drivers for lighting will see strong 40 percent compound annual growth through the period. (The driver is the entire LED circuit, including the driver IC, but excluding the LEDs.) 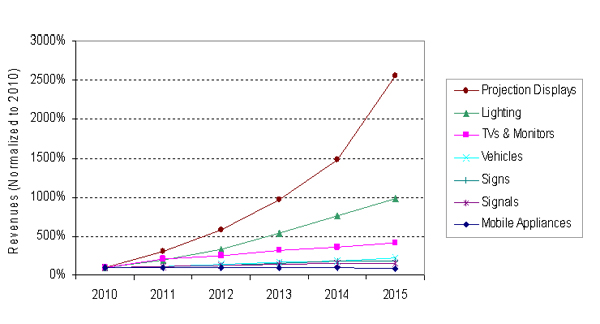 Replacement bulbs will see strong growth now because a bulb is substituted whenever a legacy bulb fails. Sales of LED luminaires (complete fixtures with built-in LED light engines) take longer to develop because owners are less likely to swap out an existing fixture or luminaire unless the business case is very compelling, or it goes into new construction. The energy costs and labor to use inefficient lighting can be substantial, however, and businesses commonly make that calculation and act accordingly. The cost savings for residents are not as evident, however, and the labor to change light bulbs is free, so the strongest growth in the residential luminaire segment will take even longer.

The figure also shows strong growth in other segments. The strongest of all is in projection displays, but that segment is so small and speculative that it does not merit much interest, except to those already in it. Handheld and embedded LED projectors may become the “next big thing,” but they may not. And even if they do, lighting will still be a much bigger opportunity.

Figure 2 shows some of the variations in such integration, highly simplified to show the features. The top left shows the simplest LED driver design, using a resistor to limit current through the LED. It is a crude design but inexpensive, and common in vehicle lighting. A linear regulator can be used in place of the resistor to improve current control and LED performance. At top right is a simple circuit with a driver IC that controls multiple LED channels with a set of parallel controllers. 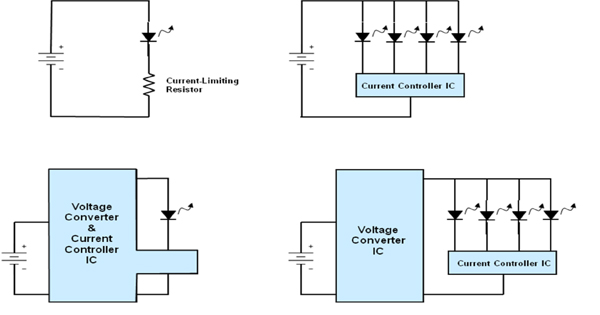 The circuit may also require converting the voltage from one DC level to another or from AC to DC. The circuit at bottom right in Figure 2 shows a separate IC dedicated to converting the voltage for the LEDs or LED strings. Some strings can require DC voltages of 60 volts or more. The circuit at bottom left shows a design with the voltage converter and current controller integrated into one IC. Designs typically use zero, one, or two driver ICs, as shown in the examples in Figure 2.

It is important to distinguish between the driver and the driver IC. The driver is the entire electronic circuit, minus the LEDs and the power source (such as line voltage or a car battery). Figure 3 shows a driver module for LED lighting alongside a driver IC. LED lighting commonly uses driver modules (also called power supplies or ballasts), because of the higher power requirements of lighting.

LED and LED driver revenues are also threatened by competing technologies. OLEDs are now in some mobile phones, and advocates promise they will become widespread in larger displays. While larger scale manufacturing is yet to be proven, such a development would displace many LED backlights, and the drivers that are designed for them. Likewise, compact fluorescent bulbs are finally in widespread use and will not cede market share readily to more expensive LED bulbs.

Drivers will be the key to enabling market growth for LEDs in several ways. Innovations in design are allowing products to do more with less by improving the overall efficiency or reducing the component count. For example, so-called AC-LED products minimize the driver and some even eliminate it by using the LEDs in a dual function: as light sources and as electrical diodes. We believe that AC-LEDs may play an important role to accelerate the adoption of LED lighting, but will not have a significant impact on overall revenues through the period.

Volume orders will allow driver and driver IC suppliers to offer better pricing for LED lighting. All agree that costs have to be removed from the bill of materials in lighting if general LED lighting is to succeed. LED replacement bulbs now sell for as low as $15, but the price needs to get below $10 to sell into larger volumes. Of course, it’s hard to discount pricing on volume without volume first, but there is progress in this segment toward the goal. Erosion in pricing also limits the revenue growth to the driver suppliers, but the opportunity is still very promising.

Several companies now offer innovative ICs that are higher in price but reduce the overall bill of materials and improve margins for IC suppliers. This sometimes means a reduction in component count by replacement of multiple ICs for a single, more expensive standard or custom IC. In other cases, especially in mobile appliances, the integration of LED driver features into a general purpose power management IC (PMIC) eliminates a dedicated LED driver IC altogether. Such choices, and the rapid changes in the consumer end product market, make the driver market highly dynamic.

Fabrication with leading-edge high-voltage clean room processes and eight inch (or larger) wafers will also play key roles in lowering the cost of drivers and lighting. The bipolar-CMOS-DMOS (BCD) process is used to integrate circuit elements that operate at widely different voltages. Long strings of LEDs used in backlights and lighting can have DC rail voltages of 60 volts or more. Monolithic integration requires a process that is compatible with such DC voltages. The trend toward high voltage driver ICs creates a large growth opportunity for chipmakers that support BCD processes.

Innovations in driver design will help take LED lighting mainstream, but the market will quickly shake out those who cannot meet strict goals for dimming, efficiency, power factor, and price. Industry and government are moving toward more standardized specifications that will reduce manufacturing costs and accelerate adoption. The U.S. Department of Energy has held several meetings aimed at building an industry roadmap toward affordable LED lighting. There are also various local and international standards that specify driver performance, mainly for safety and efficiency. These have implications for drivers with regards to source voltages, short circuit protection, flicker frequency, power factor and efficiency, standard interfaces for dimming control, and standard testing methods.

The Zhaga Consortium aims to create an industry multi-source agreement for stimulating market growth in LED lighting. Included in its terminology is a “control gear” that serves as the portion of the driver that is within an LED “light engine.” The objective is to make it easier for lighting designers to specify parts, which allows suppliers to manufacture in larger volumes of more standardized parts, which reduces costs, and so on.

Both large and small companies are bringing innovations to market. For example, Marvell and iWatt are bringing digital feedback and control into the analog circuit to gain some design advantages. Seoul Semiconductor and Lynk Labs are promoting AC-LED designs. Start-up Exclara offers an intermediate design that improves the efficiency and power factor in a compact package for replacement bulbs. Texas Instruments offers a driver IC for LED signs that staggers the timing so that all the channels are not turned on or off at the same time. The list goes on, and innovations are continuing to appear.