The introduction of LED light sources is changing the way in which lighting products are labeled and described.


The introduction of LED light sources is changing the way in which lighting products are labeled and described. Whereas in common parlance wattage is used to signify brightness, as in, “a 60-W bulb” LEDs change the correlation between input power and lumen output drastically: brightness equivalent to that of a 15-W LED bulb is very bright indeed. The need to change how bulb performance is specified has led to a federal government mandate for light bulbs this year that requires new package labeling – the Lighting Facts label (Figure 1). With the requirement, of course, came the need to perform standardized tests to obtain labeling data. 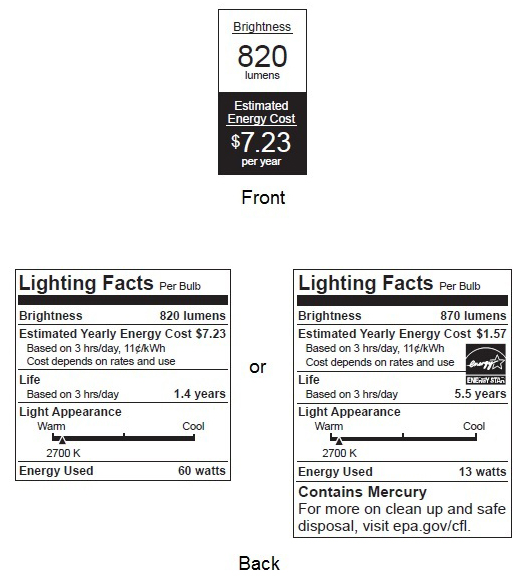 Figure 1: All light bulbs sold in the U.S. must now be labeled using the above label formats. In addition to wattage, the labels include brightness measured in lumens and light appearance in CCT (Kelvin). Based on three hours of usage per day, manufacturers must also provide the bulb’s life expectancy in years and its yearly operating cost at an 11¢/Whr electricity cost. (Source: U.S. Federal Trade Commission).

At first, the U. S. Department of Energy (DOE) initiated the CALiPER program to establish a process for qualifying testing laboratories, including verification of laboratory competence, equipment, and experience, along with round-robin testing on a regular basis. But with the advent of SSL testing standards from the Illumination Engineering Society (IES), things changed. As of March 5, 2009, the National Voluntary Laboratory Accreditation Program (NVLAP), which provides third-party accreditation to testing and calibration laboratories, started accepting applications for solid-state lighting (SSL) test methods (LM-79 and LM-80) as part of its Energy Efficient Lighting Products laboratory accreditation program. With the NVLAP process for LM-79 accreditation now available, the DoE no longer conducts its own lab qualification and round-robin testing.

IES LM-79, “Approved Method: Electrical and Photometric Measurements of Solid-State Lighting Products,” IES LM-80, “Approved Method for Lumen Maintenance Testing of LED Light Sources” and IES TM-21, “Projecting Long Term Lumen Maintenance of LED Light Sources,” are now the basic tests needed to obtain the information for properly labeling a bulb. These documents describe tests performed by accrediting laboratories that measure and verify the data used for product labeling, and so should be well understood by anyone manufacturing SSL products. Manufacturers may want to perform these tests themselves before submitting their products for testing by an accredited facility.

LM-79 describes the tests to be performed on SSL lamps and luminaires to measure electrical power, total luminous flux, and chomaticity, as well as the luminous intensity distribution. The latter requirement, while not mandated for labeling, is usually a key specification for architects and lighting designers; the amount of the light delivered at different angles from a fixture often determines the number of fixtures needed to light an area and thus the cost and appearance of an installation.

Since LEDs can be temperature sensitive, it is recommended that all measurements be made at an ambient temperature of 25°C ± 1°C, as measured within a meter of the test set-up. Measuring the power consumed by a lamp is a fairly standard process involving the use of voltmeters, ammeters, and power meters. Input power should have sinusoidal wave shape at 50 or 60 Hz for ac-powered devices, and voltage regulation for ac or dc should be ±0.2 percent under load.

While most engineers and electricians would be familiar with these types of power measurements, less common are those for total luminous flux. This testing calls for the use of an integrating sphere system (Figure 2) or a goniophotometer. Tests are described for using the integrating sphere with a spectroradiometer to measure total spectral radiation, from which total luminous flux and color quantities are calculated; this is the preferred method. Though also acceptable, using the integrating sphere and a photometer has a potential for large spectral mismatch errors which are very difficult to correct for, and so the method is less preferred. Goniophotometer testing is normally used to measure luminous intensity distribution, from which total luminous flux can be obtained. 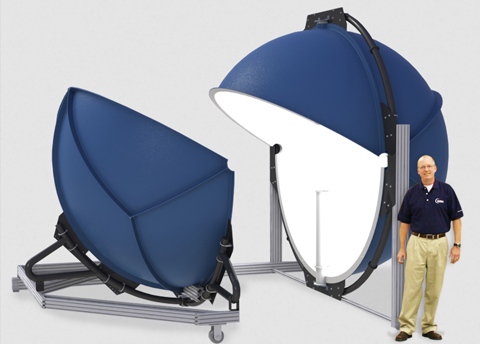 Figure 2: This Labsphere 3-m integrating sphere is intended for complete optical characterization of larger lamps and luminaries in compliance with LM-79 and -80. (Source: Labsphere).

LM-79 recommends two setups for the integrating sphere / spectroradiometer combination. In the first, the light source is suspended inside the sphere and the light emitted in all directions is measured. This measurement covers the solid angle of a sphere measured from a point in its interior (4π sr) and is referred to as the 4π geometry (Figure3). This can work for any bulb source and for many luminaires as well. Reference standards are for total spectral radiant flux. 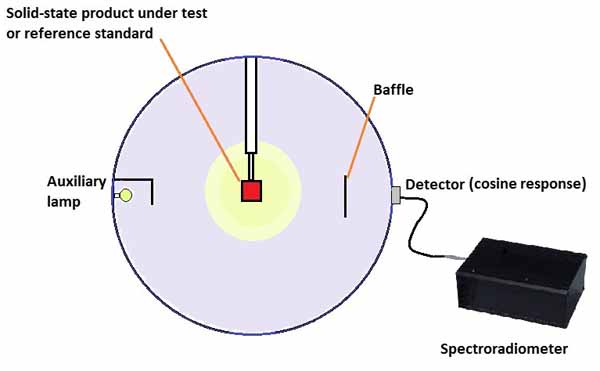 The second setup for the integrating sphere/spectroradiometer combination is intended for devices with only forward emissions and is useful when the luminaire is too large to fit inside the sphere. Here, the light source is mounted with its front edges flush against the circular opening in the sphere, or even slightly inside the sphere, in a way that ensures that all light is emitted into the sphere. This measurement covers half the solid angle of a sphere and is referred to as the 2π geometry (Figure 4). 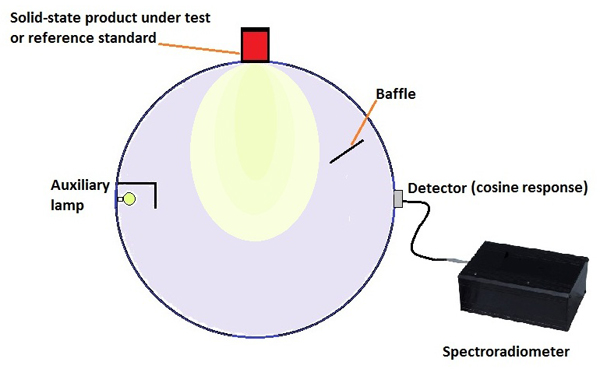 Figure 4: The 2π geometry test setup allows fixtures with built-in LED sources to be tested by allowing a bulky fixture to remain outside the sphere. (Information source: LM-79).

LM-80, “Approved Method for Lumen Maintenance Testing of LED Light Sources” describes the methods for measuring how well a product maintains its output brightness at various temperatures, and applies to LED packages, arrays, and modules, but not for luminaires. As to the test method, the document simply calls for measurements to be taken “in conformance with the appropriate laboratory method for the LED light source under test,” so the methods described in LM-79 are appropriate. The document calls for a testing period of 6,000 hours minimum, 10,000 hours is preferred, and data must be collected every 1,000 hours at minimum.

While LM-80 describes how to determine the change in lumen output over time, it does not present any way of estimating the expected lumen output beyond the test period or estimating the lifetime of an SSL product, which is considered to be when the lumen output decreases to 50 percent of its original value. That is where IES TM-21, “Projecting Long Term Lumen Maintenance of LED Light Sources,” comes in. Approved on July 25, 2011, TM-21 uses the data taking methods of LM-80 for a sample lot size of 20 SSL products and explains how to use the data to estimate the lumen output beyond the test period and thus project the lifetime of the product. On-going work is addressing the issue of lifetime testing for luminaires in which the SSL devices are an integrated system component; these systems have many other components which can affect their lifetime, making testing more complex.

Noting the complexity and shortcomings of the SSL product testing, Cree, a well-known manufacturer of high-power white LEDs used in SSL products, has created a new testing service called TEMPO (an acronym for Thermal, Electrical, Mechanical, Photometric, Optical) that is open to designers using LED products from any manufacturer. Cree’s program covers a variety of points outside the area of IES tests – areas such as binning and color point evaluation, driver efficiency, and dimmer compatibility -- That are necessary for commercial success of a product. The service can help assure that designs operate properly or pinpoint design flaws before the products are sent to accredited laboratories for formal certification. The services can be applied at each step in the manufacturing process, from design to final product.

There are many industry standards for solid-state lighting that need to be met. This article has reviewed those LED and luminaire standards and measurement requirements that are most applicable to specifiers and designers of LED-based products. The successful implementation of LED technology requires an intimate understanding of these standards and performance metrics.