Learn how critical insight and application expertise are essential from vendors in sensing and connectivity for the Internet of Things (IoT).

For IoT to become a reality, each connected point – whether directly hard-wired or wireless – requires multiple physical connectors and routing for sensors, power, signal I/O, and more, as well as Internet connectivity.

Everyone's talking about the Internet of Things (IoT), and with good reason. The IoT will connect countless sensors of temperature, pressure, flow, on/off state, and more to the Internet and the Cloud, while also allowing control of actuators for setting heat, speed, and motion via a smart controller or a browser.

These sensors and actuators will be in homes, offices, stores, and factories, designed for relatively straightforward tasks such as home HVAC and remote security monitoring, as well as in time-critical applications such as updates on factory-floor machinery status and processes. Physical points, places, and machines will communicate with each other to facilitate feedback and control operations, as well as with humans who can monitor and decide upon actions to take.

Just how sizable is this market? Market research firm IHS expects the installed base for Internet-connected devices will grow from 12.1 billion devices in 2013 to 49.8 billion devices by 2025. The revenue from just one segment of the IoT market – semiconductor-based sensors – is expected to grow from $8.9 billion this year to more than $10.6 billion by 2017. Gartner Group's forecast is also huge, with 26 billion connected IoT devices by 2020.

The ubiquitous anything-to-anywhere IoT connectivity is made possible, in part, by the availability of cloud services, which provides a data raceway with a near infinite number of on/off ramps as well as associated pit stops (storage areas).  According to Pete Smith, Sr., Application Engineer TE Connectivity Sensor Solutions, “What’s also required…but not as obvious or publicized…is a significant amount of physical hardware -- in the form of sensors, actuators, various connectors, I/O ports, wired and wireless links, Internet gateway connections, and so on.  And that's in addition to the critical elements of the Internet backbone, gateways, servers, and routers.”

Structure of an IoT application

When people talk about IoT connectivity, they often start with a basic diagram such as Figure 1. While correct, it greatly simplifies the actual interconnect situation. However, by looking at a simple device such as a smart home thermostat, the actual complexity becomes dramatically clearer, as shown in Figure 2. 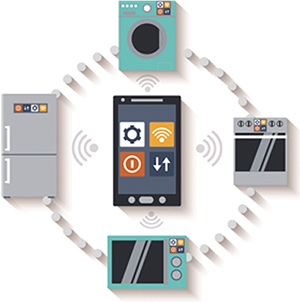 In contrast, the situation is much more complicated with a smart thermostat (Figure 3). Besides the control function, it includes a Wi-Fi link to the homeowner's wireless network to connect numerous sensors (heat, motion, and even lights, among others), so it can make an intelligent decision about system on/off operation based on more than solely ambient temperature. Making all this connectivity practical are tiny internal connectors for other sense/control points, the user LCD display, between internal circuit boards, a USB port, and more.

“What was once an almost trivial, temperature sensing on/off switch, requiring no power to operate, is now a smart device packed with about a dozen integrated circuits, sensors, a lighted display, Wi-Fi radio, and push-buttons,” says Smith. A full bill of materials (BOM) account will show numerous sensors and connectors for signal, power, and antenna for this relatively simple temperature-control device – a situation replicated over and over in IoT installations. 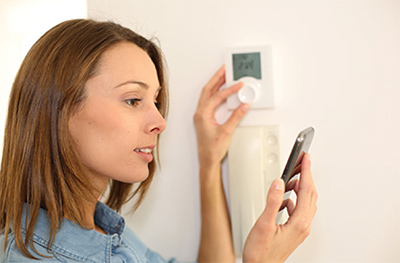 Consider the requirements of a smart thermostat for internal interconnections and external I/O connectivity. Space is at a premium as this thermostat must incorporate many new functions, features, and user interface into a housing which is about the size of the older, basic unit. That's why components such as TE's Flexible Printed Circuit (FPC) connectors are a good match (Figure 4). Used between PC boards or PC boards and off-board components such as the LCD display, these low-profile, space-saving connectors support both power and signal links, and are compatible with standard SMT (surface-mount technology) pick-and-place assembly machines, to lower production costs. 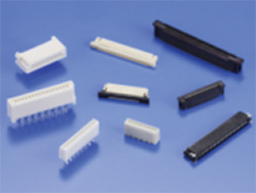 Not all designs have a flexible PC board. For those with a semi-rigid board rather than a flexible one, TE's One-Piece Compressive Board-to-Board Connectors provide a low-cost, high reliability interconnect solution that is scalable in height, pitch and number of points, to precisely match the application needs without the size and cost burden of unneeded contact points (Figure 5). 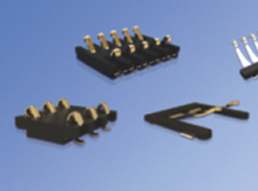 For thermostats and similar products which also need wired, external I/O connectivity as well as a wireless Wi-Fi link (often preferred for factory set-up and test, and user on-site configuration), Micro-USB connectors are a good choice (Figure 6). These connectors are available for PC-board mounting as well as with matching cable assemblies, and support the full USB 2.0 specification for data rates and power handling. Their small size and low profile are well-suited to the tight PC board real-estate and height constraints of these consumer applications. 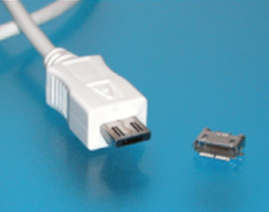 Another area of major IoT product development is activity monitors and trackers for wearable, portable health, and fitness applications (Figure 7), as well as specialized altimeters, compass watches, bicycle computers, and dive watches. Unlike the thermostat, these devices have only wireless connectivity, yet they must sense, track, and report multiple critical physical parameters such as body temperature and climbing distance (altitude/pressure) in a package that is far smaller. 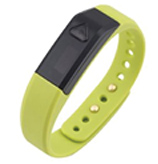 To meet the requirements of these units, a new generation of high-resolution altimeter sensors such as the MS5806-02BA from TE Connectivity with SPI and I2C bus interface is a good match (Figure 8). This hermitically-sealable sensor requires no external support components, and senses and converts ambient pressure corresponding to altitude with 24-bit resolution (equivalent to 20 cm of altitude change) over a normal operating range of 300 to 1100 mbar and temperature span of -40 to +85°C. Its design features very low hysteresis and high stability of both pressure and temperature signal, critical to these applications, and a footprint package size of just 6.4 mm × 4.0 mm x 2.75 mm. 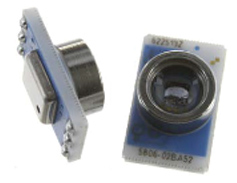 The wireless link standard for these units is most often based on standard such as Wi-Fi, ZigBee, or Bluetooth Low Energy (also called Bluetooth Smart) operating in the license-free 2.4 GHz band, although frequencies such as 902 to 928 MHz and even the 5.4 GHz band are also used. Regardless of the standard and band chosen, the transmit/receive antenna is a critical part of the RF signal chain. To provide this function, antennas such as the 1513164-1 molded stamped unit is a viable choice (Figure 9).

This 16 mm diameter surface-mount puck-style antenna, just 6 mm high, is a good fit for the very limited package and PC-board space of wearable products of many styles. Along with gain of 4 dB, it supports both 2.4 to 2.483.5 MHz operation (supporting Bluetooth, Zigbee, and Wi-Fi) as well as the increasingly popular 5.150 to 5.875 MHz band.

Another vital factor to be sensed in wearable and portable applications is temperature, which is the most frequently measured physical parameter. To enable these applications, TE has developed components such as the TSYS02 Digital Temperature Sensor. This tiny 2.5 mm x 2.5 mm x 0.8 mm) integrated circuit senses and converts temperature into digital value with 16 bits resolution, provides required calibration coefficients, and reports the digitized value and calibration factors via I2C interface. With basic accuracy of ±0.2°C from -5°C to +50°C, and with miserly current consumption of under 12.5 μA at a one conversion/second rate and less 0.14 μA in standby, it is a good fit for extremely power-constrained situations.

When the hype and buzz surrounding the Internet of Things is pared back and it’s time for implementation, the IoT premise and physical reality come down to sensing and connectivity. This requires many types of specialized sensors of physical parameters and multiple connectors, encompassing low-voltage sensors, high-voltage functions, battery power, AC power, DC power, wired interfaces, wireless links, and antennas.

A broad-line sensor and connector vendor does more than just list numerous parts in its catalog and provide samples to designers. Instead, it also provides critical insight and the applications expertise needed to assist designers in making suitable choices among the many inevitable tradeoffs…then delivers the promised parts on time and in quantity.