The Importance of Calibration in Resistive Touch Screen Systems

Design engineers want to quickly and easily integrate touch technology into their embedded system designs for reduced cycle time and risk. They want a drop-in touch screen controller that will “just work” without the learning curve required to become a touch expert and write touch code. Most resistive touch screen controllers are simply analog-to-digital convertors that require time and risk for the designer to develop and integrate into their system. Some resistive touch controllers offer this expertise as part of their black box solution on a standalone microcontroller.

One critical element for successful resistive touch integration is a good calibration routine that ensures accurate touch response. Touch accuracy is a basic customer expectation for any good human interface design. For example, a customer does not want to get a cup of coffee if they touched the hot chocolate button. In this article, we’ll explore the importance of calibration in resistive touch sensor designs and how it is achieved.

What is calibration and why is it important?

One of the biggest design challenges with resistive touch solutions is getting accurate touch coordinates mapped to the specific underlying display via the touch screen. This is known as “calibration”.

Most resistive touch systems require a calibration step as one of the first steps in integration. Calibration of the touch sensor to the display is necessary because it is next to impossible to perfectly align the touch sensor’s coordinates to the underlying display. “Alignment” is a term used to describe the process of scaling and aligning the sensors’ anomalies to the display (Figure 1).

This also becomes an issue should the system’s touch sensor need replacement during its lifetime. If a particular manufacturer’s sensor may no longer be available, a second-source sensor may have to be used instead. This new sensor may not have the same orientation as the previous one, so the calibration must be able to correct any anomalies.

Proper calibration of the touch screen to the display is important for touch accuracy. The user wants the system to respond according to the button they pressed and not to the one next to it. Some sensors are less linear than others. Five-wire sensors have an inherent non-linear edge. While activating along the edge, the native controller response would move the cursor in a bowed line. This bowed edge can cause large inaccuracies, especially on systems with large sensor sizes. A calibration routine must include edge-correction in its algorithms. Most often edge-correction is addressed by using a calibration routine that includes processing controller data as the sensor is activated along this edge. This can be achieved by adding calibration targets that fall along the edge of the sensor. This process is often referred to as a “linearization” since it addresses the inherent bowing of the 5-wire sensor by making the controller’s response linear while activating along the edge (Figure 2).

Figure 2: Comparison of a non-linearized and linearized sensor.


Advanced resistive touch screen controllers with sophisticated calibration algorithms issue touch reports that correct or modify the sensor orientation and precisely map the reported touch location to the physical dimensions of the underlying display. This allows the designer to easily manage the otherwise problematic issue of proper calibration in a touch sensor system.

Challenges associated with calibration, and how calibration is handled

Calibration can be achieved by the controller or via a software driver. This article will focus on controller-driven calibration for embedded systems applications.

A successful touch sensor system has to compensate for a variety of erroneous or changing inputs. Common challenges to proper calibration in touch systems include mechanical misalignment or changing electrical properties to the touch sensor over time. Accurate calibration is critical to manage this variation and provide accurate coordinates.

An advanced resistive touch screen controller will offer the option of either reporting raw touch reports or utilizing calibration information to report pre-processed calibrated touch reports. Typically all that is required for the calibration process is for the operator to sequentially touch a series of targets [crosshairs] presented by the host on the display device. The controller then archives the raw-touch data from each calibration touch point (in EEPROM) and uses that data in normal operation to process “raw” data into “calibrated” data.

Both the host and device must understand the geometry of the underlying matrix. The controller can define the matrix by an inset and a specified number of calibration points. The inset defines the margin on the perimeter of the calibration point matrix. This allows for any physical limitations from the bezel. Interior calibration points are spaced equally between the margins. This is illustrated in the following example (Figure 3). 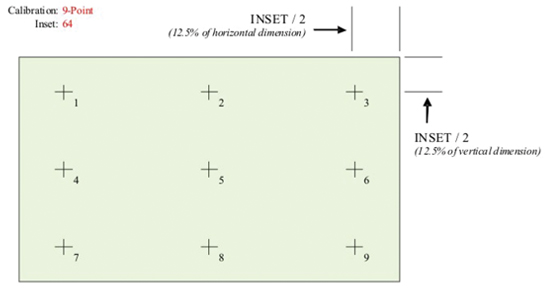 Advanced calibration is difficult to achieve without sophisticated algorithms that identify and compensate for the mismatch between the display and the touch sensor, as well as other variables. Some highly developed resistive touch screen controllers have advanced proprietary algorithms that allow for this level of calibration in the controller which greatly facilitates incorporating touch in the design.

Advanced resistive touch screen controller solutions do much of the work for the designer by delivering advanced, filtered touch coordinates with on-chip calibration. Proper calibration, along with these sophisticated capabilities, supports enhanced touch features such as signature capture, drawing, and highly accurate button pressing for easy implementation in a wide variety of embedded system designs. These features allow for optimal human interface design with the lowest design risk in resistive touch solutions.

Getting calibration right is critical to the successful integration and use of a touch sensor system. A good human interface design is intuitive and accurate. This means the user will get the expected response when they interact with the device – they will get their cup of hot chocolate as selected.

Note: mTouch is a trademark of Microchip Technology Inc. in the U.S.A., and other countries. All other trademarks mentioned herein are the property of their respective companies.