The Growth of Hall Effect Sensors Based on Low-Power Features


It seldom takes nearly 90 years to find a viable application for a technology breakthrough, but engineers took 86 years to develop an application for the Hall Effect Sensor. The Hall Effect Sensor was discovered by Edwin H. Hall, a doctoral candidate who stumbled upon a strange electrical event while attempting to verify Kelvin’s theory of electron flow. In Hall’s experiment, he placed a thin layer of gold in a strong magnetic field and connected a battery to the opposite side of the film. He discovered a small voltage appearing across the film when he measured the current flowing through it. He also found that the voltage was proportional to the magnetic field’s strength multiplied by the current. As Hall applied current to this metal square between two magnets, a secondary voltage appeared in the metal at a right angle to the voltage applied. His discovery evolved into a switching mechanism that could create an on-off square-wave voltage signal.

Hall’s discovery dates back to 1879, and in 1965, development engineers Everett Vorthmann and Joe Maupin of MICRO SWITCH Sensing and Control integrated the technology into a single silicon chip as a low-cost solid state sensor. Based on Vorthmann and Maupin’s integration, more than a billion Hall Effect devices and sensor products have been delivered using Honeywell’s Hall Effect technology. These devices and sensor products are primarily used in keyboard applications.

Hall Effect Sensors are often called switches based on the on-off digital voltage signal produced. The sensors’ differentiating characteristic is that the constant voltage signal can change suddenly from maximum voltage to nearly zero and back again, no matter the engine speed. This capability is easily adapted for timing purposes, making the sensors extremely useful in a variety of applications. The highly-reliable, solid state sensors are most widely used in industrial brushless motor applications.

Hall Effect Sensors are essentially transducers that vary output voltage depending on the changes in the magnetic field. They typically feature three wires or terminals for ground, supply and output signals. When used in an automotive application, the output signal requires that the sensor be supplied with a reference voltage from an onboard computer (between 5 and 12 V). This supply voltage creates the switching effect in the sensor. The sensors also may require analog circuitry to interface to microprocessors. These interfaces may have input diagnostics, short/open circuit detection, input diagnostics, and the ability to monitor and provide current directly to the sensor. 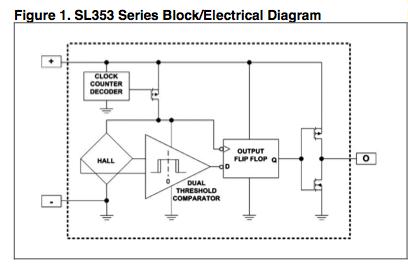 One example of a Hall Effect Sensor is the Honeywell Sensing and Control's SL353 Series (see Figure 1 above and the table below). The sensor ICs are small, versatile, and digital Hall-effect devices operated by the magnetic field from a permanent magnet or electromagnet. They are designed to suit a wide range of applications with low power requirements. The series responds to either a North or South Pole and do not require magnet polarity to be identified, simplifying installation and potentially lowering system cost. The SS50AT series are low-cost bipolar Hall-effect sensors in a surface-mount package that have a thermally balanced IC over the full temperature range. The bipolar magnetics respond to alternating North and South poles. A built-in regulator provides stable operation over a 4.5 to 24 Vdc supply voltage range, and internal circuitry prevents sensor damage if the supply voltage polarity is accidentally reversed.

Energy efficiency is paramount. For example, these low-power sensing devices use Bipolar Complementary Metal Oxide Semiconductor (BiCMOS) technology and a timing circuit that turns the power on for a short time. Power is turned off for the rest of the period, or duty cycle, to significantly reduce the average current consumption. The SL353HT and SL353LT can operate from a supply voltage as low as 2.2 V, promoting energy efficiency.

In a research report titled “Automotive Active Speed and Position Sensors Grow, but Passive Sensors May Make a Comeback” analyst Simon Schofield explains that active non-contacting sensing strategies based on the Hall Effect, magneto resistive, and variable reluctance transformer technologies are beginning to penetrate markets and take market share from more established passive sensors. The report covers active versus passive automotive speed and position sensors that are expected to grow to 880 million units by 2012. The need for improvements in automotive system reliability and reduced warranty costs are the main drivers.