The Forecast for Weather Sensors: Sunny, with a Greater Chance of Accuracy

Say ‘weather sensor’, and temperature and barometric pressure sensors come to mind. Less well known are the many other new sensor-based applications and ways to tap into, harness, and analyze data that are becoming vital to weather forecasting in a variety of industries.

In aviation, for example, ultrasonic anemometers measure surface wind, which is one of the key parameters for landings and takeoffs at airports, which also employ ceilometers, devices that use a laser or other light source to determine the height of a cloud base.

Those of us who fly are all too familiar with the stomach-jolting, white-knuckled reactions to turbulence that are unfortunately part of the frequent-flyer experience. Although nothing can be done to stop the turbulence, American Airlines and Alaska Airlines are currently testing sensors and software that relay real-time data and then transmit warnings to other airlines. This is a vast improvement on the after-the-fact reporting on turbulence by pilots—often coming when it’s too late to take measures to avoid the weather disturbance.

NASA’s Weather Accident prevention program1 identifies severe turbulence as one of the eight technology strategies it is attempting to use to help make travel safer on commercial airliners and smaller aircraft. Turbulence (Figure 1) is the greatest cause of airline injuries and costs airlines an estimated $100 million a year, according to the space agency. 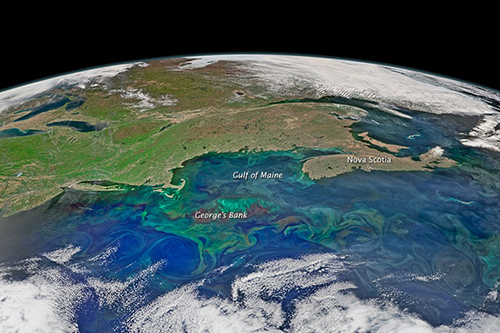 Also recently on the market is the MultiScan ThreatTrack radar system2 from Rockwell Collins that detects hazardous weather from up to a distance of 320 nautical miles, scanning developed and fast-growing convective cells. Adjusting on-the-fly (no pun intended), the system can maximize the “probability of detecting” threats from weather during all phases of flight, inferring the presence of lightning and hail and tracking rapidly building cells below flight paths to better represent the actual thunderstorm threat.

The need for global atmospheric data has never been greater. The costs of natural hazards are soaring as extreme weather increases and population expands, putting more and more lives and property at risk. Remote sensing is the basis of a commercial weather satellite network now undergoing testing by PlanetiQ. The privately held company is planning to launch two miniature satellites in 2016 and 10 more in 2017, all of which will track radio signals from such satellites as the U.S. Global Positioning System, Glasnoss in Russia, BeiDou in China, and Galileo from Europe. This data will be downloaded into programs that not only accurately predict weather—they will also model global climate changes.

Outside of advancements in aviation and predicting atmospheric conditions, weather forecast accuracy for the masses just got a boost from a precise barometer resident in the iPhone 6 or 6 Plus (to go along with an array of sensors which include an ambient-light measuring device and an accelerometer, gyroscope, digital compass, proximity sensor, touch-ID fingerprint reader and a camera sensor). Based on the incorporation of sensor-based barometric pressure measurement, mobile phone apps such as Dark Skies3 offer down-to-the-minute rain predictions including detailed information on temperature, precipitation probability, wind speed, humidity, and even UV index. Seven-day forecasts are available that not only measure pressure, but join in on crowd-sourced weather reporting.

At the heart of these new systems are sensors such as the ChipCap2 from Amphenol Advanced Sensors, a fully calibrated humidity and temperature sensor that features digital or analog output with an alarm function. Reliable in harsh environments such as found in weather stations, it has a free operating voltage of 2.7 V minimum to 5.5 V maximum, and consumes little current. Features include a capacitive polymer sensor chip and a CMOS IC with EEPROM that are integrated into an embedded system in a reflow-solderable SMD package.

Also designed specifically for industrial, weather station, and meteorology equipment applications, is the HIH-5030/4031 Series low voltage humidity sensors by Honeywell Sensing and Control. Direct input to a controller or other device is made possible by the sensor’s near-linear voltage output. Based on a current draw of only 200 μA, the series is suitable for low-drain, battery-operated systems and tight sensor interchangeability reduces or eliminates OEM production calibration costs.

Instrumentation-quality relative humidity (RH) sensing performance is housed in an SMD within a covered IC humidity sensor that is also condensation-resistant and factory-fitted with a hydrophobic filter for use in environments where condensation is the norm. The sensing element’s construction not only keeps out condensation, but also, dust, dirt, oils, and common environmental chemicals. Benefits also include: low-power design, enhanced accuracy, fast response time, and stable, low-drift performance.

A look at weather sensors would be incomplete without considering temperature. Microchip’s TC1047 and TC1047A (Figure 2) are linear-voltage output-temperature sensors in which output voltage is directly proportional to the measured temperature. 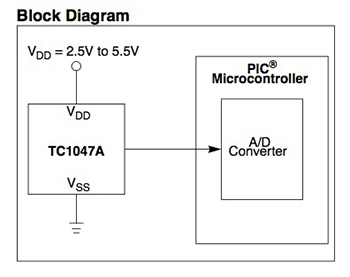 The sensors can accurately measure temperature from -40°C to +125°C. With the TC1047, the power supply voltage can vary between 2.7 V and 4.4 V. In comparison, the supply range of the TC1047A is 2.5 V to 5.5 V. Output voltage range for the devices is typically 100 mV at -40°C, 500 mV at 0°C, 750 mV at +25°C and 1.75 V at +125°C.  A 10 mV/°C voltage slope output response provides a predictable temperature measurement over a wide temperature range. Both are packaged in 3-pin SOT-23B packages for use in space-critical temperature measurement and instrumentation as well as temperature-regulator applications.

Also worth considering is Microchip’s MCP9700 and 9700A, a tiny analog temperature sensor with a Linear Active Thermistor IC that converts temperature to analog voltage. An inexpensive solution for applications that require measurement of relative change of temperature, it is highly accurate yet consumes only 6 μA (typical) of operating current.

Unlike resistive sensors such as thermistors, this IC does not require an additional signal-conditioning circuit so that the biasing circuit development overhead inherent in thermistor solutions can be avoided by implementing this device.

Images of Katrina remain. Gulf storms, hurricanes, tornados—they are a part of life in the U.S. Annually, however, weather forecasting is lagging behind and severe damage is winning. When 100-year winter storms do not materialize, yet all preparation is in place based on forecasts, the expense is staggering. The U.S. once was the leader in forecasting. Today, however, Europe does a better job, with the European Centre of Medium-Range Weather Forecasts (ECMWF) in England considered to be the global leader.

Going forward, more accurate systems based on sensors combined with super- computing power are critical, especially given the high cost of damage. By September of this year—which means as you read this—the Department of Commerce has stated that it will improve its overall weather forecast model accuracy to 9 days to enable more accurate, consistent, longer lead time for specific weather event forecasts and warnings.