A look at power conversion options associated with automotive applications available for embedded designs and describes trade-offs designers are forced to make.

What emerges from this survey is a growing range of high-voltage power solutions available from Hotenda. Highlights include new single-channel options, but also several complex multi-channel parts such as TI's quad output LP8728, its quintuple output TPS65310, and the newest direct battery-connecting solutions from LTC (LT3514), and OnSemi (NCV890200).

Long gone are the days when 5 V and 3 V rails would suffice. Consider the latest ‘infotainment’ processors. Automotive companies, recognizing the cost effectiveness of embedded processors developed for tablet and smartphone applications, have been deploying the same base MCU architectures to deliver feature-rich infotainment experiences. However, MCUs such as Freescale's i.MX 6 series highlight how complex the powering problem is (e.g. consider the MMPF0100). An i.MX 6 system can require twelve regulated power rails, some supplying more than 2 A; others may be tight tolerance and at low levels (e.g. 0.8 V). Building such a supply system discretely would be impossible, especially as these processors need precise power rail sequencing. It is not just the complex mix of supply rails, current demanded, tolerance, and sequencing that matter. Overriding all of these considerations is thermal management.

Thermal management plays a key role in successful design. Even highly-efficient converters dissipate power as heat, the device temperature rise being dependent on the scale of the internal power dissipation. It is relatively easy to run into temperature limits with automotive applications. Consider that as little as 1 W dissipation when applied in a standard 3 x 3 mm 16-pin QFN package leads to a 45.6°C temperature rise (refer to TPS62090 theta-ja data). Couple that with elevated system ambient operating temperatures and thermal problems emerge. Often, the internal enclosure temperature limit is set at 85°C. Add to that 46 degrees of extra heating of 1 W dissipation and you have a junction temperature of over 130°C, exceeding the thermal rating for the TPS62090, pushing it towards thermal shut-down.

Elevated input voltage is often seen in industrial environments, but worse is the primary power rail found in the car. A sealed lead acid unit nominally appears to supply a 12 V terminal voltage, but occasionally, along comes a high voltage, high-energy transient. The biggest of system killers is the load-dump transient, which can exceed levels not easily handled by most regulators directly. Usually the OEM will deploy some suppression to ensure that, as seen at the ECU (electronic control unit), transients do not exceed 40 V. However, at that level, a power device must use a costly high-voltage process to ensure the power component survives.

Several architectural approaches to the embedded power problem have emerged, aided by some of the latest semiconductor products launched in the last two years. Figure 1 shows two basic methods used in most automotive power systems today. In Figure 1a the battery supply is stepped down to an intermediate voltage level, commonly between 3 V to 6 V, by a pre-regulator. Use of a high-efficiency bulk step-down regulator here allows the use of low-voltage, low-cost point-of-load regulators to establish the sub-rails. One issue is the selection of the intermediate voltage level. Some automotive OEMs require system operation be guaranteed down to levels as low as 3 V. Most standard step-down converters cannot meet this need since they are unlikely to be able to supply a 3 V output with only a few millivolts bias across them. Under such a condition a more complex pre-regulator design may be needed, such as a buck/boost. 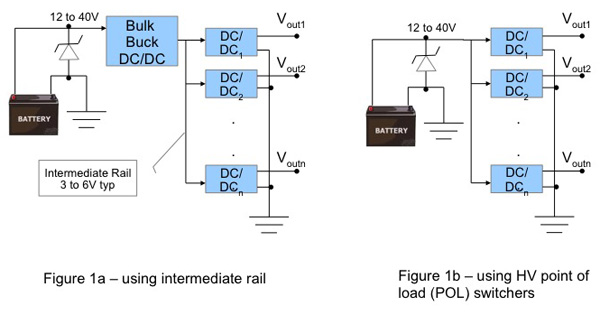 Figure 1 (a and b): Two high-voltage power approaches.

The use of an intermediate rail means that the powering problem is chunked down into a beneficial high- and a low-voltage problem. With a regulated intermediate rail it may even be possible to use linear LDOs relatively efficiently. The benefit of this approach is the wide range of off-the-shelf choices already available. This discrete approach also helps manage thermal design as heat dissipation is shared and spread across multiple components. 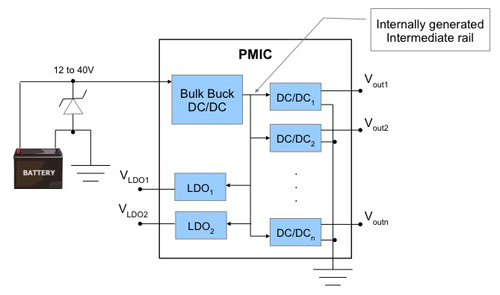 The second option, illustrated by Figure 1b, is to use high-voltage point-of-load regulators for each rail, doing away with the intermediate rail altogether. However, the economics probably dictate against this choice except when used to power remote ECUs with limited number of rails. Despite the ease and flexibility of the routes suggested in Figure 1, as rail count increases, discrete solutions are becoming increasingly unmanageable as they require too much board space to implement. The final option suggested in Figure 2 is a hybrid version of figure 1a, where the elements of the solution are effectively made available within a single IC. This helps to solve the real estate problem, though it means that individual devices must tailor their specification to a particular processor. However, companies are experimenting with several routes to tackle this. In some cases a monolithic multiple output design is used, but some suppliers consider multi-die on a single lead frame approach. From their perspective this is attractive as it enables a wider variety of product options being brought to market rapidly. In some cases, digital power techniques are providing greater design freedom and programmability.

Trends in switching power management over the last few decades.

Integrated switching regulators really came to the fore in the late 1980s. At that time the most significant advance was the LM2575 52 kHz SIMPLE SWITCHER® from National Semiconductor (now owned by TI). The masterstroke of that was how it simplified switcher design. Design up until then required specialist knowledge, a combination of black arts from inductor design to closed-loop feedback theory. For the first time, the LM2575 guaranteed the performance of a switching regulator when used with industry-standard external components. Furthermore, it heralded the emergence of the world's first design simulation tools. Adding internal loop compensation, engineers no longer need to be concerned with loop stability either, hence the ‘Simple’.

Since then switchers have improved in the following ways: Synchronous versus asynchronous

Figure 3 shows both topologies. In the asynchronous topology, just one internal power MOSFET is supplied as the topside control switch. The resulting IC tends to be smaller and relatively inexpensive. For the synchronous topology, the addition of a complementary low-side MOSFET helps reduce power loss associated with the external catch diode given the inherently lower drain to source on-resistance of the FET (RDS(ON)), thus optimizing overall conversion efficiency. However, there are downsides to the synchronous topology: 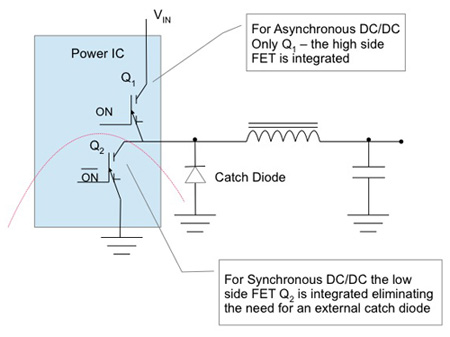 A focus on products

The products reviewed in this article are summarized below. Three of the six parts are simple, single-output devices, but all are recent releases. For example, take ON's NCV890200. This 2.2 A output switcher supports a 40 V transient, offers 2 MHz switching for reduced-size passives, and features a ruggedized enable input that can be tied to the positive input voltage. In most cases, designers should not overdrive the enable pin, as this is often a logic-level pin. However, this is not so for this part. Shutdown quiescent current is a respectable 5 µA.

Table 1: Snapshot of some high-voltage switchers and PMICs offered by Hotenda. (Click for full size)

Notice that all the parts mentioned in Table 1 are high-voltage products with the exception of TI's LP8728. This device is included here as it is a flexible quad-output device. It has been run through the rigors of an AECQ100 qualification plan to prove its credentials for automotive applications. Although limited to 5 V input, it offers a dense design option capable of running well from an intermediate rail and generating four outputs, all in a small board area. The part offers three default outputs of 3.3, 1.8 and 1.25 V and a pin-selectable fourth output of either 1.8 or 2.65 V. Each output has a separate enable pin for convenient supply-rail sequencing, and the part tops this off by providing phase-shifted outputs to help manage radiated EMI. It features independent soft-start and power-good flags.


TI's TPS54340 and the NCV890200 from ON Semiconductor are good examples of asynchronous switchers that integrate only the high-side FET. To use these parts, you will need to select an external catch diode. This architecture tends to offer cost-optimized solutions, often outperforming synchronous designs in light-load operation. These particular parts are highlighted as they are rated for high voltage and support relatively-high output currents. These characteristics make them good choices for generating intermediate voltage rails mentioned earlier (Figure 1a). Both parts flag up their newness by offering peak switching frequencies beyond 2 MHz (2.5 MHz for the TPS54340), helping to minimize magnetics.

Linear Technology's LTC3646 is another single-output switcher, but differs through its synchronous design. This 1 A device represents a minimalist design, needing only a handful of external passives to operate. It achieves up to 95% conversion efficiency. Burst mode boosts light-load efficiency and it maintains regulation on just 190 µA quiescent current (sleep mode).

Moving on to the main thrust of this review, consider two of the latest PMICs. One example is Linear Technology's LT3514, a triple-channel asynchronous buck capable of simultaneously supporting a single, continuous 2 A rail and dual 1 A rails. It switches at up to 2.2 MHz and is one of a small breed of regulators that can support a 100% duty cycle (switch permanently on). This is useful when the input voltage falls to a low level. This part can maintain regulation from as little as 3.2 up to 36 V, low-level operation being maintained by the inclusion of a small inductive boost regulator. 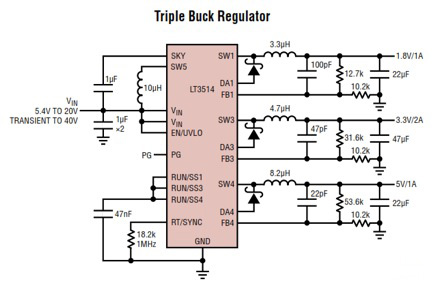 Inspecting the application circuit shows a neat design with a minimum of components. It should also be cost-effective, as LTC elected to use an asynchronous architecture. The company claims that the design techniques used enable it to achieve over 88% efficiency under a variety of operating conditions. Another helpful feature is the provision of anti-phase switching, reducing input current spikes and enabling the use of smaller input capacitors. Robust short-circuit protection helps ensure long-term reliability. Extra features include output voltage tracking, a programmable under-voltage lockout, and individual power-good flags. The LT3514 can be synchronized to an external clock source and it integrates soft-start and current-mode compensation circuits.

This well thought out solution requires a minimum of components and comes in either a 4 x 5 mm twenty-eight lead thermally-enhanced QFN package or a 24-pin TSSOP. Finally, the LT3514 is complemented by a pin-compatible quad-output version, the LT3504, which provides four independent 1 A outputs.

The diversity of options available to power embedded processors in harsh environments has improved recently. With multi-channel devices like Linear Technology's LT3514, it has become less of a challenge to supply the multitude of voltages required in a neat and relatively simple power system design. Successful deployment of these parts still requires careful thermal management and board design, given the density of the packages used. However, the components described illustrate the growing inventiveness being applied to power management technology.