The Challenge of Dimming HB-LEDs in Legacy Lighting Systems

Substituting a diode for a resistor in a circuit powered by an AC line is typically an easy recipe for disaster, but it's the precise challenge faced by designers seeking to replace incandescent lamps with modern high-brightness LED technology.


Substituting a diode for a resistor in a circuit powered by an AC line is typically an easy recipe for disaster, but it’s the precise challenge faced by designers seeking to replace incandescent lamps with modern high-brightness LED technology. The VLED15 series from CUI was specifically designed to address the challenges of integrating LEDs in legacy lighting installations.

High-brightness LEDs have come a long way in recent years, and are regarded by many as the technology most likely to replace incandescent lamps. There are some very good reasons to take such a view. Compared to competing technologies, such as compact fluorescent lamps, HB-LEDs can offer equivalent or greater luminous efficacies, contain no disposal-complicating mercury, can improve optical efficiencies by virtue of their directionality, exhibit longer service life potentials, and have greatly simplified drive requirements, particularly in applications where a dimmable light source is required.

One of the more significant factors supporting the incumbency of incandescent lighting, however, is an inherent incompatibility between LED technology and most currently installed dimming controls.

The operational concept of the basic phase control dimmer circuit as shown in Figure 1 is quite simple; R1 and R2 compose a variable resistance of known minimum value, which causes the voltage waveform across C1 to lag behind the source voltage waveform to a varying degree, as determined by the RC time constant thus formed. When the voltage across diac Q1 exceeds the device’s breakover voltage as a result of this phase shift, the device enters its conduction mode, allowing C1 to discharge through TRIAC Q2’s gate terminal, thus triggering it into conduction. When the current through Q1 and Q2 falls below their respective holding currents, the devices commutate, returning to their high-impedance states, until the process begins anew, which typically happens once per every half-cycle of an AC waveform. Through this process, the circuit of Figure 1 permits truncation of the leading edge of each half-cycle of the AC waveform, resulting in a reduction of the RMS voltage applied to the load to a degree that corresponds to the setting of R2. 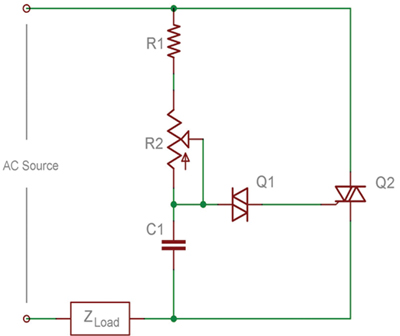 This basic circuit, unlike many theoretical examples, requires relatively few modifications or additions to be a functional, practical product. The circuit in Figure 2, developed through observation of a common dimmer switch, shows a very strong resemblance to Figure1. A trim potentiometer R2 (set and fixed at the factory) is included in parallel with the main control pot R3 to allow compensation for component tolerances, and a mechanical switch is added to provide a true “off” position. Also added are L1 and C2, which limit the slopes of the current and voltage waveforms associated with the device in order to reduce electrical noise emissions and ensure that TRIAC Q2 is operated within its dynamic limits. 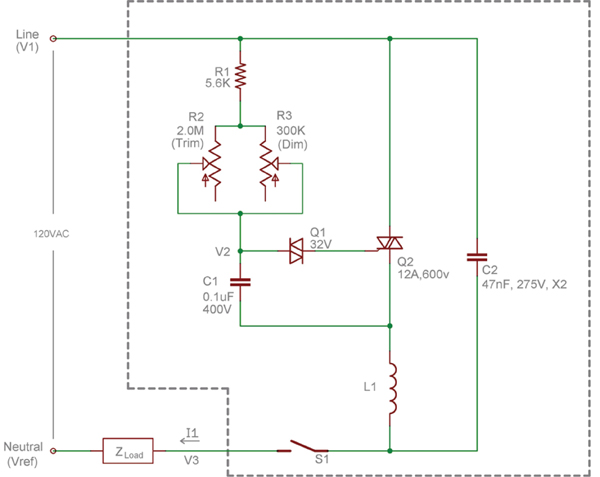 The phase control technique, implemented as described in Figure 2 or in similar circuits, is an effective, simple, and inexpensive way to control the amount of power applied to a load that is resistive or nearly so—a prescription which incandescent lamps fill quite nicely.

The problem arises because the control scheme of these circuits, being connected in series with the load, cannot function independently of the load. If the load is more or less linear (i.e. it passes a current proportional to applied voltage by some fixed constant), the relationship between the potentiometer setting and the firing angle of the main TRIAC will have a direct correlation and the RMS voltage applied to the load will have a well-defined, monotonic, and determinate relationship with the potentiometer setting.

Unfortunately, incandescent lamps are the only common lighting agents that naturally meet this criterion. Because gas discharge tubes (fluorescent lamps) and LEDs are nonlinear, there is no practical way to power them from an AC line without benefit of some mechanism to regulate current flow. Curiously, the term “ballast” has been used for devices that serve such a function for fluorescent lamps, while the term “driver” seems to be preferred in the context of LED-based devices.

Regardless of terminology, one of the first stages in most modern electronic ballasts is a filtered diode bridge such as that in Figure 3. Loads fed through such a rectifier stage are invariably nonlinear, since they permit no current flow in the AC line when the instantaneous line voltage is less than the voltage present across the filter capacitor.

When a load incorporating a diode bridge (Figure 3) is supplied through a phase control dimmer (Figure 2), the timing capacitor (C1) in Figure 2 no longer begins charging at the zero-crossing of the AC line voltage, but at whatever point the instantaneous line voltage exceeds the voltage across the filter capacitor in Figure 3 plus a few diode drops. Because this voltage is not necessarily consistent from cycle to cycle, the result is variability in the dimmer’s turn-on point. 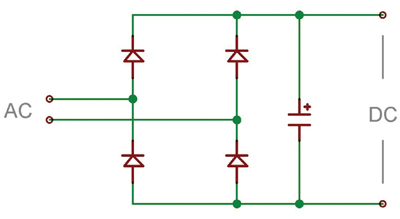 Additionally, since current flow through a Figure 3-style rectifier ceases once the instantaneous line voltage falls below the voltage present across the filter capacitor, use of such loads in conjunction with a Figure 2-style phase control dimmer can cause TRIAC Q2 to commutate early, prior to the end of the AC half-cycle, and not necessarily with any degree of cycle-to-cycle consistency. Commutation prior to the completion of an AC half-cycle creates the possibility of re-triggering during the same AC half-cycle. In addition to obscuring the measurement of an overall conduction angle, multiple triggering during a single half-cycle causes elevated power dissipation in the phase control circuit due to an increase in the frequency of switching events.

In general, loads powered through a filtered diode bridge render phase control circuits in the fashion of Figure 2 more or less useless as a dimming control. While the setting of the control potentiometer retains some influence over the conduction angle in such situations, the amount of voltage present on the filter capacitor has an equal or greater influence. Since the latter quantity can vary from cycle to cycle under various influences outside the control of the dimmer circuit, the conduction angle of the phase control circuit varies along with it. Because the conduction angle and dimming control signal are one and the same, it becomes very difficult to design a non-incandescent lamp that is compatible with existing dimming controllers without sacrificing dimming performance. A limited dimming range and visible “flicker” are among the most common problems exhibited when HB-LEDs are retrofitted in existing lighting applications that utilize TRIAC dimmers.

The current installation environment for HB-LEDs is relatively undefined. There are numerous variables that can affect LED performance if not properly accounted for in the driver. The distance of the lighting agent from the dimmer is a perfect example. In some instances, the AC power cables may extend well over 100 feet from the source TRIAC. In other instances, the source TRIAC dimmer may be positioned very close to the LED modules. Another factor is the number of LEDs connected to the TRIAC dimmer, which can also vary greatly depending on the installation environment. In certain applications, the TRIAC may only be asked to drive a few modules, while in other applications, 30 modules or more may be connected to a single TRIAC dimmer.

These varying installation scenarios inevitably lead to line instability and line noise, causing many LED modules and their associated drivers to improperly dim under TRIAC control or flicker during the dimming cycle. The highest incidents of “flicker” normally occur at either the highest current point or when the conduction angle is approaching its lowest point.

The migration toward HB-LEDs as a commercial and residential lighting solution has brought with it concerns regarding the effect that this technology may have on power distribution grids. As discussed, basic implementations of these devices typically incorporate a filtered rectification stage, resulting in a device which draws current only near the peaks of the AC waveform. The resulting current waveform has a high harmonic content, which, if unmitigated, results in elevated distribution losses and damage to the power distribution infrastructure.

In response to these power quality concerns, regulations regarding the minimum power factor of common lamps are being issued in many localities. Naturally these requirements vary by jurisdiction, which results in a need to design to the most stringent specification if a single product is to be globally marketable. For LED-based products, that implies a power factor exceeding 0.9.

The design of an LED driver module that allows for seamless integration into legacy dimming applications presents a number of challenges. Consider the following requirements for an LED driver that suits this purpose.

The LED driver must: The VLED15 series

The VLED15 LED driver from CUI Inc. is ideally suited to expand LED lighting acceptance. The VLED15 series has integrated TRIAC dimming support, operating seamlessly with today’s industry standard dimmers. This transparent functionality allows for immediate use in retrofitting existing installations that utilize TRIAC dimmers. The series is one of the first TRIAC dimmable drivers to operate in most installation environments without “flicker” related problems. To address instability on the AC line due to varying installation environments, the VLED15 series uses a complex input filter to clean and isolate the AC line from the internal operation of the driver. This results in very stable dimming in most installations with approved TRIAC dimmers. 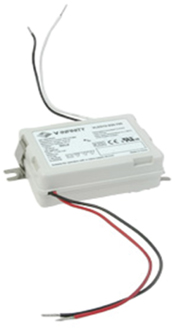 Figure 4: CUI's VLED15 LED driver.
These constant current devices incorporate active power factor correction (>0.9) to meet regulatory concerns and can drive up to 1500 mA of current. The VLED15 drivers are rated for a 50K hour MTBF at a 90°C case temperature, meet all applicable safety and emissions standards, and include overvoltage, overcurrent, and short-circuit protection.

The potential for LEDs in replacing the installed base of incandescent light bulbs is enormous. Government regulations increasing the minimum efficiency levels of lighting sources and in many cases, mandating complete phase out of incandescent bulbs altogether, has created a global opportunity for alternative solutions. These solutions must be compatible with the existing installed systems to accelerate adoption around the world. One of the bigger hurdles that must be considered relates to LEDs interfacing with TRIAC dimmers. The inherent differences between operation of an LED and incandescent creates a technical challenge that CUI’s VLED15 series transparently overcomes.