The Basics of Mixers

Mixers are used in a variety of RF/microwave applications, including military radar, cellular base stations, and more. An RF mixer is a three-port passive or active device that can modulate or demodulate a signal.


Mixers are used in a variety of RF/microwave applications, including military radar, cellular base stations, and more. An RF mixer is a three-port passive or active device that can modulate or demodulate a signal. The purpose is to change the frequency of an electromagnetic signal while (hopefully) preserving every other characteristic (such as phase and amplitude) of the initial signal. A principal reason for frequency conversion is to allow amplification of the received signal at a frequency other than that of the RF. 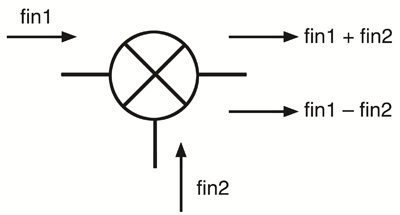 
Figure 1 shows the mixer’s three ports: fin1 and fin2 are the input ports while the output port is the both the sum and the difference in frequency of the inputs:

Figure 2: Representation of downconversion and upconversion.

Depending upon the application in which the mixer is being used, the LO is typically driven with either a sinusoidal continuous wave signal or a square wave. In concept, the LO signal acts as a gate of the mixer in which the mixer is considered ON when the LO is a large voltage and OFF when it is a small voltage. The LO can only be an input port, while the RF and IF ports can be interchanged between the second input or output.

Generally, a passive mixer is made of passive devices, such as diodes. An active mixer is made of active devices, such as transistors. Active or passive implementations are used depending on the application, and there are advantages and disadvantages. As an example, a passive implementation that uses diodes as nonlinear elements or FETs as passive switches, exhibits a conversion loss rather than gain. This may impact the overall noise performance of the system, so in this case an LNA is usually added prior to the mixer.

Passive mixers are widely used due to their simplicity, wide bandwidth, and good intermodulation distortion (IMD) performance. Active mixers are mostly used for RFIC implementation. They are configured to provide conversion gain, good isolation between the signal ports, and require less power to drive the LO port. They can be monolithically integrated with other signal processing circuitry and are less sensitive to load-matching.

There are three basic types of active and passive mixers: unbalanced, single-balanced, and double-balanced.

Mixer selection depends on many factors and, most of all, on the requirements of an application. Determine the LO, RF, and IF frequency ranges involved as well as the LO drive required. Some applications require a specific amount of harmonic distortion. Finally, determine the type of packaging the mixer will have.

A wide selection of mixers can be found on the Hotenda site. Below are a few examples.


Linear Technology offers the LT5560, a low-power high-performance broadband active mixer. This double-balanced mixer can be driven by a single-ended LO source and requires only –2 dBm of LO power. The balanced design results in low LO leakage to the output, while the integrated input amplifier provides excellent LO-to-IN isolation. The signal ports can be impedance-matched to a broad range of frequencies, which allows the LT5560 to be used as an upconversion or downconversion mixer in a wide variety of applications.


The MAX2680/MAX2681/MAX2682 from Maxim Integrated Products are small, low-cost, low-noise downconverting mixers designed for low voltage operation and well-suited for use in portable communications equipment. Signals at the RF input port are mixed with signals at the LO port using a double-balanced mixer. These downconverter mixers operate with RF input frequencies between 400 MHz and 2,500 MHz, and downconvert to IF output frequencies between 10 and 500 MHz.

The purpose of the mixer is to provide both the sum and difference frequency at the output port when two input frequencies are provided at the other two ports. The designer should fully understand all mixer properties to efficiently translate this frequency properly and without any distortions.