Limited colors and limited light output kept LEDs in the role of indicator lights for more than 20 years after the first devices were commercialized. Today however, single-die LEDs are available that dissipate more than 50 W, and as a result LEDs are making inroads into a whole host of new applications.  This PTM Article will look at the outdoor, indoor, industrial and portable consumer lighting markets and discuss some of the products and tools Texas Instruments has put forth to simplify the design process for LEDs in these areas. 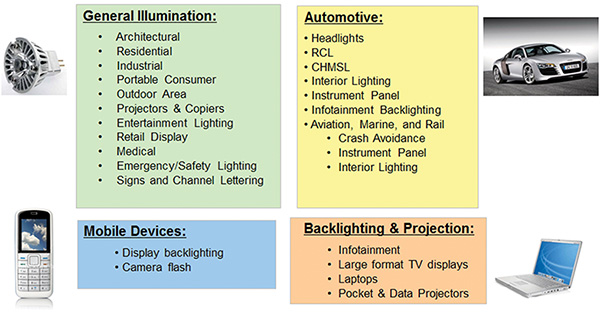 Thanks to recent government legislation and incentives in the area of general illumination in Asia, Europe and the Americas, LEDs are becoming more widely used in street lamps as well as other outdoor lighting applications. This is because they provide superior reliability, efficiency, dimming, and robustness when compared with traditional CFL and high or low pressure sodium lamps. Moreover, they do not contain the hazardous mercury or halogen gases found in traditional fluorescent and HID technologies. TI’s LM340x family of buck, boost, and buck-boost LED drivers (as seen in Figure 2) support a wide input voltage range and are fully optimized to support the demands of outdoor and street lamp LEDs. The buck regulators provide up to 96% efficiency, thereby increasing the robustness and reliability of the whole system, while the boost regulators are designed to support a large number of LEDs in one string, reducing the cost of the total solution. The constant on-time architecture of these drivers means that no loop compensation is required, reducing the number of external components needed. This means less design time and reduced system complexity for the users’ designs.

The block diagram in Figure 3 shows a typical architecture of a street lamp which is being driven by two high brightness LEDs off of a 12, 24 or 48 VDC input. 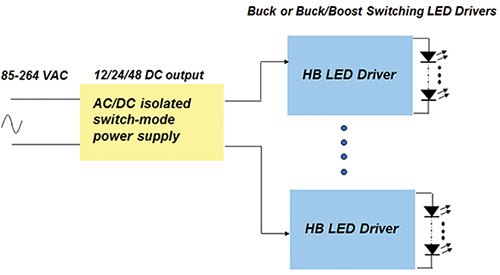 The standard circuit for the LM3404 board has also been optimized to run from 24 V to support outdoor and general purpose illumination requirements. A second circuit using the LM3404HV runs from 48 V. The DIM pin of the LM3404 is a fast enable pin, meaning that when it is at logic low, and the LED output current is off, the remaining circuits stay active. This allows the LM3404 to respond very quickly when the DIM pin signal changes to logic high. The result is that delay time tD is minimized. 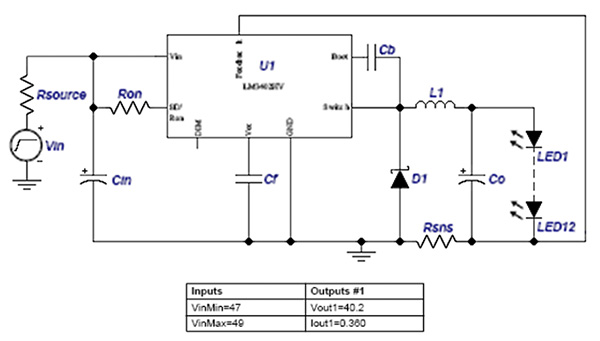 Figure 4: Demonstration circuit for the LM3402 with reference design links.

As seen in Figure 5, MR16 lamps are regularly used in place of compact fluorescent lamps, CFLs, or standard incandescent light bulbs for applications such as residential and retail lighting. They are well suited to a variety of applications that require directional lighting of low to medium intensity including recessed ceiling lights, desk lamps, landscape lighting, track lighting, and retail display lighting. MR16 lamps most often operate at 12 V, although they are also available in other voltages. Halogen MR16 lamps can usually operate on either AC or DC voltage, LED devices require DC voltage, and as such require some form of transformer in the unit if AC is to be used. 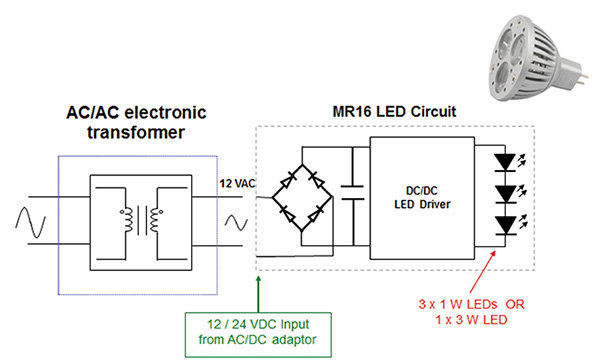 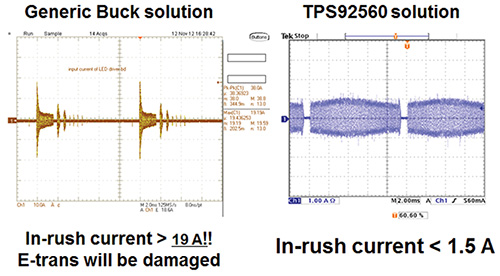 Industrial lighting includes applications such as office and warehouse lighting, as well as lighting for schools and hospitals. While buildings such as hospitals, schools, and sports facilities tend to be primarily concerned with providing the appropriate amount of light for the associated task, buildings like warehouses and offices are often more concerned with saving money by maximizing the energy efficiency of the lighting system. The use of LEDs in these areas helps to achieve both goals as LEDs can be easily dimmed to provide the desired light and they can emit light of an intended color without the use of the color filters that traditional lighting methods require. The LM3421/23 Buck-Boost/Boost supports a wide input voltage range of up to 75 V, allowing for a up to eighteen LEDs to be connected in series, which has the benefit of reducing overall costs. Also, as the MOSFETs are external on the LM3421/23, the device is capable of driving large loads, up to 10 A. Robust fault protection and indication features further protect and extend the lifetime of the LEDs. 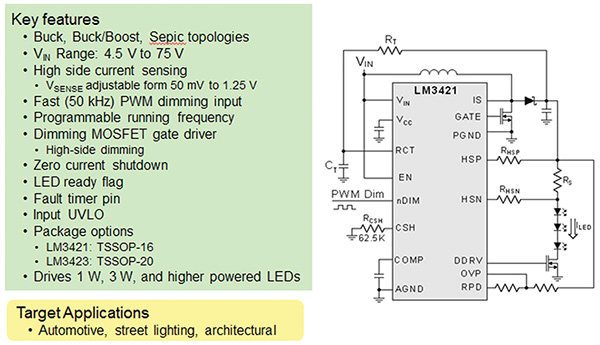 The TI TPS92510 is an integrated MOSFET high-current buck converter. It accepts input voltage from 3.5 V to 60 V and it is able to provide continuous output current up to 1.5 A. Simple enough to construct using passive components only, the TPS92510 has a PWM dimming input which makes digital dimming control easy. TPS92510 also provides a thermal fold-back capability by converting the TSENSE input voltage level into a PWM dimming signal internally in order to protect the LEDs from being over-heated. 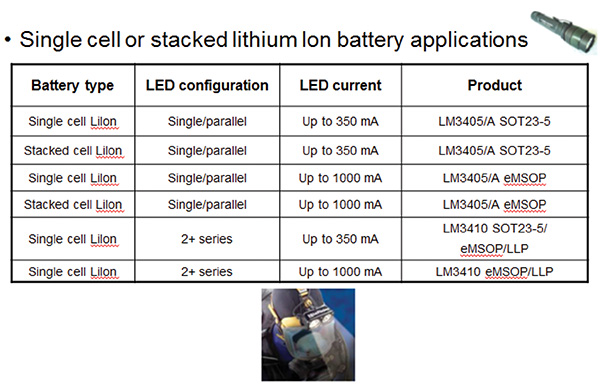 As an example, the circuit using the LM3405A is designed to drive one InGaN WLED cycling at four different current levels: 0, 125 mA, 250 mA, and 700 mA with a peak-to-peak ripple current of 40 mA or less. The input is 4.2 V to 4.5 V from three AA batteries; the Vo is approximately 3.7 V at 700 mA current; and the switching frequency is 1.6 MHz (typical). For a complete look at this reference design, visit the LED reference design library on ti.com. 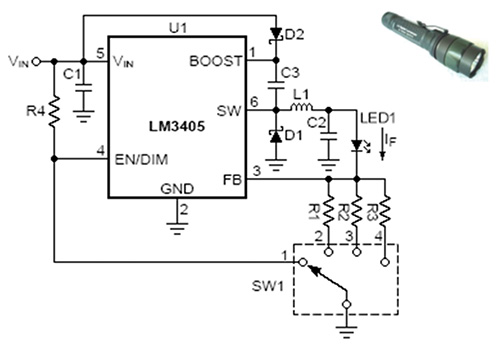 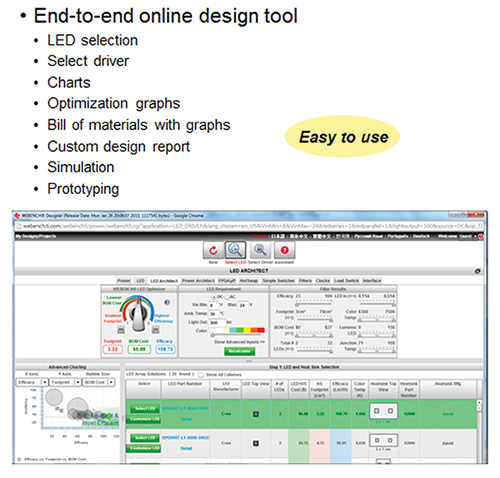 Other resources are also available through TI’s website (as seen in Figure 11) including; partnership pages, TI Designs, evaluation, and demo boards, plus more to further help the designer along the way with their LED designs. 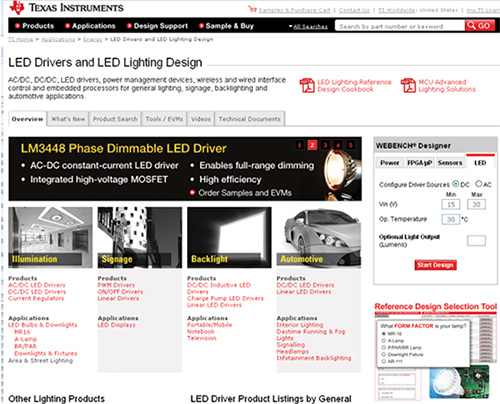 Finally, as Figure 12 shows, an online E2E community is available on which experts will answer any technical questions raised in the community. 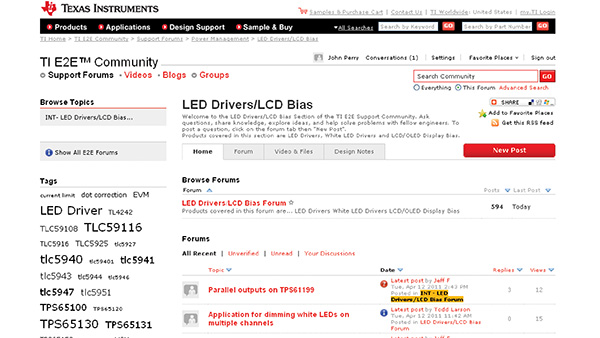 In summary, with LEDs becoming more prevalent in many of the lighting markets, the need to design appropriate LED lighting systems has increased. Texas Instruments has developed the WEBENCH® LED Designer to aid the designer in the complete LED system design process. WEBENCH helps in the choice of LEDs based on design requirements, finding the proper LED driver for these LEDs, analysis and optimization of the system design, simulation and fine tuning of the circuit, and building and ordering a custom prototype kit for evaluation. With this and other resources available from TI, the entire design process can be quicker and easier enabling total time to market to decrease dramatically.

For a full audio version of this training please visit: