Sales of Apple’s iPad and other tablet computers will contribute to a 13 percent increase in computer shipments. 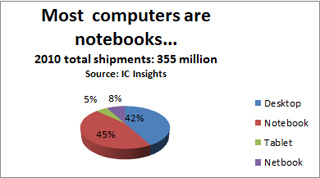 Notebook computers will post healthy growth over the next four years and will remain the largest segment of the PC market.Surging sales of tablet computers and continuing robust demand for notebook PCs will drive a 13 percent increase in global PC unit shipments in 2011, according to researcher IC Insights. The increase follows a 19 percent rise in PC sales in 2010.

Notebook computer shipments will rise to 14 percent to 182 million. Notebook shipments combined with tablet computer sales will drive total portable PC unit shipments 23 percent to 250 million units. That means portable computers will account for 62 percent of worldwide PC shipments in 2011, compared to 58 percent of the total in 2010 and just 31 percent in 2005, according to IC Insights. 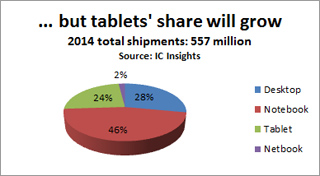