For energy-harvesting applications, the ability to boost the supply voltage or provide a negative supply rail offers significant flexibility in circuit design.

Switched-capacitor converters offer distinct advantages over inductor-based switched regulators. Besides eliminating magnetic design issues, switched capacitors typically feature lower noise and EMI performance. A typical application circuit requires only two external capacitors in contrast with inductor-based solutions, which typically require at least two external capacitors as well as the inductor itself. Along with this minimal component count, the elimination of the physically-large inductor results in an end design that is significantly smaller in PCB area and component height.

The earliest monolithic switched-capacitor device, the Intersil ICL7660, contains all the circuitry required to implement a voltage converter, integrating a series DC supply regulator, RC oscillator, voltage level translator, and four output power MOS switches (Figure 2). The device operates as a voltage inverter, doubler, or multiplier over an input range of +1.5 to +10.0 V with rated 99.9 percent voltage-conversion efficiency and 98 percent power efficiency. Although the initial ICL7660 required a diode between the voltage output pin and external capacitor to prevent latchup, the subsequent ICL7600A and functional replacements from other manufacturers eliminated the need for the external diode.

The Linear Technology LTC1044 was one of the first alternatives designed to provide enhanced converter functionality while retaining pin-for-pin compatibility with the 7660. The basic LTC1044 was further enhanced with the LTC1044A, which offers higher input voltage up to 12 V as well as 2.5x lower quiescent current for greater power-conversion efficiency, and a boost function that allows engineers to raise the internal oscillator frequency over a range from 5 kHz to about 35 kHz, to optimize performance in applications with higher load currents. Another enhanced version, the LTC1046 delivers up to 2.5x higher output current than its predecessor.

Another alternative to the ICL7600, the Analog Devices ADM660 is an inverter/doubler that is designed to operate at higher internal-oscillator frequencies, at 25 or 125 kHz using its FC (frequency control) pin. Increasing the frequency allows smaller capacitors to be used for equivalent performance, or if the capacitor size is unchanged, it results in lower output impedance and ripple. With its ADM660 variant, the ADM8660, Analog Devices provides a low-power shutdown pin that can disable the device and reduce the quiescent current to 300 nA. For higher output requirements, the 7660/660-compatible SP6661 from Exar features output current as high as 200 mA, providing selectable oscillator frequency up to 900 kHz to improve performance at high loads.

While manufacturers released an array of enhanced variants of these early devices, later converters have brought improvements in power consumption, input-voltage range, drive current, oscillator frequency range, and offer other special features. For example, the Texas Instruments LM2660 inverts or doubles voltage over an input range from 1.5 to 5.5 V, providing 100 mA of output current while featuring a selectable oscillator frequency of 10 or 80 kHz. Designers can also configure the LM2660 to divide a positive input voltage precisely in half. In this mode, the device supports input voltages as high as 11 V. In contrast, the Texas Instruments LM2765 voltage doubler consumes only 130 µA, while the TI LM828 voltage inverter requires only 40 µA.

Perhaps the most significant enhancement in switched-capacitor voltage converters has been in addressing the lack of output-voltage regulation in traditional inverter and doubler monolithic designs. For example, the Microchip Technology MCP1256, MCP1257, and MCP1259 devices offer regulated 3.3 V output from 1.8 to 3.6 V. For light loads, engineers can place the MCP1256 and MCP1257 devices in sleep mode, which lowers quiescent current to 20 µA while nevertheless maintaining the regulated output voltage. Alternatively, designers can opt for the MCP1259, which features a bypass mode that connects the input voltage to output with essentially no current consumption by the converter. 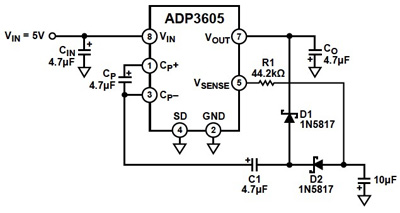 For even lower-input-voltage applications, Texas Instruments offers their TPS603xx series, which operates with an input voltage range of 0.9 to 1.8 V. While the TPS60301 offers basic boost-conversion functionality with regulated output of 3 or 3.3 V, the TPS60310/60311/60313 extend these features with a snooze mode. In snooze mode, the devices operate with a typical operating current of 2 µA, while maintaining regulated output voltage of 3 or 3.3 V. Snooze mode limits current output to 2 mA, but if the load current increases above this level, the device senses the drop in output voltage and automatically switches from snooze mode to normal mode to regulate output voltage with higher output currents.

Switched-capacitor converters offer a simplicity of operation and design that can address constraints in circuit size and complexity often found in energy-harvesting applications. Available switched-capacitor converters offer a range of features and performance characteristics needed to maintain low-power operation while inverting or boosting input voltage. Using these devices, engineers can implement a variety of flexible power features needed to address a growing array of supply requirements for low-power, energy-harvesting designs.